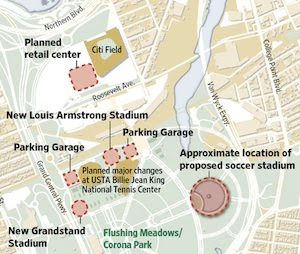 Simply put, we cannot understand why the league insists on setting up shop on public property, in a park utilized on any given weekend by thousands of borough residents. This atop a whole litany of lingering concerns.

Questions about the feasibility of building a stadium on a swamp will remain until MLS explains in detail how it will manage to build a stadium in an area where the water table is three feet below the surface at most, according to the 2006 U.S. Geological Survey map. Those concerns are only magnified by the proposed parking facility — not for public use — below the stadium, which we presume will be a wonder of water-repellent engineering.

The league is also ignoring the lack of parking for fans, a problem anyone who frequents the park during the U.S. Open can attest to. While we respect MLS’s traffic advisor, our own contributor Sam Schwartz, his projections that 50 percent of fans will take mass transit still leaves thousands of people driving to games. Where will they park?

Most troubling is the still-unspecified replacement parkland, a major sticking point for many. Yes, the league is required to replace every inch of parkland, but there are no rules mandating it be in our borough. MLS is in the throes of a search, though that process has been closed to public input.

We’re assuming the parkland it ultimately chooses will be safe, clean, close to a populace that will utilize it and accessible. So … why not build the darn stadium there?

While Major League Soccer’s proposal for a new stadium in Flushing Meadows Corona Park certainly has its supporters – the throngs of people who came out earlier this week is proof of that – it seems as if those opposed to the plan have had their words fall on deaf ears.

We do not argue the fact that a professional soccer team could draw well in Queens. Soccer is, after all, the most popular sport in the world and Queens carries the banner of being a diverse borough, home to many that follow the sport religiously. But we do question the need to put the stadium in a spot that is meant to be free and open to the public. Are there no other areas in Queens that could benefit from a new stadium?

Flushing Meadows Corona Park is an area that should be cherished and maintained as a place where families can go – for free – and spend the day enjoying the scenery. The parkland, which is at a premium in the City, should not be forsaken for some corporate profit.

How about building it on the contaminated MTA property that MLS is suggesting as replacement parkland? This way it will be next to the Flushing River instead of in it. It would also be closer to the subway and LIRR.
Posted by Queens Crapper at 12:32 AM

Quote: ""Soccer is, after all, the most popular sport in the world""

What bullshit. In the di-crappid EU or Yugoslavia perhaps.
--Not in America, Russia, India, Arabia or China. Is this King Bloomberg "new math" ?

So why is it that local papers, and CB7, favored former Mayor Dinkins' giveaway of Flushing Meadows Park land to the USTA?

It provides the pols with tons of pictures with 3rd world types and by doing so, opens up campaign money from their homeboy countries (not unlike throwing Flushing under the bus to get East Asia money),

tickets to give away to favored interest groups to buy votes,

"pay off tha' boys for a decade"

Yep!!
The "father and son" closed union people will be the only people allowed to work in this stadium. Those people are really pushing for this.
This is why the average person can no longer afford to take there family to a Broadway play or Christmas show, $125 and up including concert tickets.
I doubt these soccer people really know what a $$ raping scam they are in for.

Jobs for who ? --15 or so local "regular people" willing to hark peanuts & red beer cup for minimum wage perhaps. ALL the rest are going to be LOCKED OUT out forever.
Not one politician will disclose this !

Do you know what it takes to get a single guitar amp on stage at City Field or any major NYC venue with these IATSE unions ?

2 loaders to bring it from the curb to the stage.
1 stagehand to wheel it on stage
2 Stagehands remove from roadcase.
3 electrician's to supply a 110vac power drop box for it. (this is nothing more then an black rubber extension cord)
A backline technician to place a microphone on it.
A monitor tech to mix foldback sound
A house sound (FOH)to mix to the house speakers.

That's 9 people at $175 an hour who sit around doing nothing 8 out of 12 hours on the clock minus the 6PM curfew break.
Now add 25-30 more IA guys for lights, sound and other production equipment.

I worked some shows at City Field as a personal guitar, Bass and amp tech.
Most of those union people did not know what they were doing. Dozens of useless unnecessary body's (almost all relatives of each other) being "directed" jacking up costs.
There are far better techs, sound engineers available but ALL LOCKED out of working these "house" jobs.

in 2014 , a U.S. taxpayer owned company General Motors will own the M.U.S.C. uniform logo for all their sports products sold in the world.

And who is ManU's current sponsor? A.I.G., beneficiary of federal bailout funds.

Other BPL teams have American ownership as well. For example, Liverpool is owned by the people who own the Boston Red Sox. George Soros is a capitalist. He can do whatever he wants with his $$$$.

And as far as GM's participation is concerned, who owns the Detroit Lions of the NFL? It's just that you don't like Soros' politics. Woody Johnson, the owner of the New York Jets, is a strong participant in the Republican Party. But so what?

Why not build it atop Corona Yard? That would put the stadium even closer to the trains. If it can work for Barclays Center, it can work here too.

FYI - Manchester United is owned by Malcolm Glazer, who also owns the Tampa Bay Buccaneers of the NFL. Stay on topic, please? Who owns a Britih soccer team, albeit a really good one, has nothing to do with the issue of additinal corparate incursion into Flushing Meadow-Corona Park.

#7...AON CORP.,A U.S.Risk Consulting firm located on Water Street,N.Y.C. has been the sponsor of Manchester United Football (soccer) Club,U.K. since the 2010-2011 season.AON purchased it on 6-2009
it was reported that the value of the logo was worth 80 million pounds over a four year period.

as GM still owes $25-40 billion bailout $$$$ to the U.S taxpayers, one could say that the taxpayers are sponsoring a U.K.soccer club.

stay on the SOCCER TOPIC please.

How is commenting on George Soros - who doesn't own ManU - staying on the topic, which is building a soccer stadium in FMCP? Take your own advice, Gramps!

do you know the owners of the SOCCER club that will play in the Queens franchise eventually ? at FMCP.

Again Gramps, what does ManU ownership have to do with a stupid plan for a stadium in FMCP?

And here's who the New York Post says the team owner is:

No Freebees on the public dime. Let 'em pay for their fun or give back equal acres to public groups clamoring for more recreational land.

How come they don't just use Citi Field?

Soccer? It's a sport that appeals to 3rd worlders!

Somebody's trying to sock it to us real good, for sure
with all of this BS!

Quote: ""Soccer? It's a sport that appeals to 3rd worlders""

Yup- exactly, you don't need much. Just a ball, a rectangular field of grass seed or artificial turf and a bunch of drunken slobs to watch.
Math, Science &Productivity= out
Soccer = in

Dumb, stupid and easy to control is how the mayor and his friends want people in Queens.
Add a couple handout's and free stuff and you have friends. Too hell with Archie Bunker and the productive working class.

The Bloomberg mobs views Queens as its cash cow not only for votes but big money potential from the federal government.
Have you ever noticed how vigilant the Bloomberg mob has been at trying to boost Queens census numbers ?

Soccer is perfect to keep the sheeple and insubordinate capable of doing damage occupied.
It and it rules were coined up 18th century England with help from various people including Cambridge University as a babysitting service for the King.
---Make sense now ?