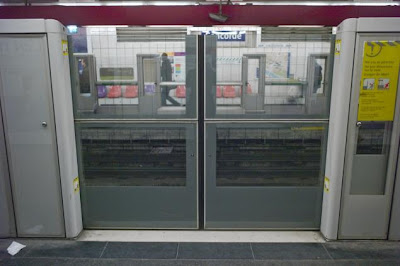 The MTA will reconsider installing sliding doors on some subway platforms to prevent riders from getting killed or injured by trains, a top official told the Daily News.

Fifty-four people this year have met their bloody ends on the tracks — a five-year high at more than one per week — according to preliminary figures released by the Metropolitan Transportation Authority. There were 139 incidents in which people got hit by trains — often either because they fell or attempted suicide — compared with 146 in 2011.

“We have to revisit it,” interim MTA Executive Director Thomas Prendergast said Friday of a pilot project to install sliding doors on the tracks.

His remarks came one day after a crazed woman killed a 46-year-old immigrant by shoving him into an oncoming train in Queens. Earlier this month, horrified straphangers witnessed a homeless drifter hurl a man onto a Times Square subway track, where he was fatally crushed by a train.

The MTA has had on-and-off discussions about placing protective barriers along at least some platform edges, as other cities like London and Paris have done.

It would cost an estimated $1.5 million to install sliding doors along two platform edges in a new station, and more to retrofit an existing station. The MTA has 468 station, although many are too narrow for doors.

It would be nice if the mayor put the DOH's anti-soda and anti-salt money toward something like this which would actually protect the public.
Posted by Queens Crapper at 12:00 AM

We've all heard this one before.

Why not keep all the nuts in jail VS dumping them in Queens Blvd?
Euthanize them like the Zoo does with terminal anamals!!
Yes they are animals !

Crappy:
There was a story in --was it the Post or was it HERE some years back.
It claimed the jails dump crazys at night on Northern blvd under the Queens Plaza train station.
They even give them money to go back on the trains and go nuts again once the meds wear off.
Perhaps someone can find it

it would cost the taxpayers less if the psychos were put back in the asylums in nyc.

tell the truth to the public, progressive zealots.....

Hundreds of rude mannered Asians...crudely pushing and forcing their way forward, as the trains pull in...to be the first to grab a seat.

That's why I spend close to $200 for a monthly LIRR commuter ticket.

It beats getting trampled upon, or killed!

I think that the MTA should consider hiring white gloved employees...like they do in Tokyo, Japan...to "politely" push people into the subway cars at Main Street.

Other countries use this door system. It works well.

NOW....
what increase in the transit fare can we expect for this?

Maybe if we had controlled our appetite for over development, our platforms would not be so crowded!

Anon No. 3: Speaking of zealots, how do you know if this would have prevented what happened in the subways?

There are over 450 stations in the subway system. Only one or two of them have only one track. Each sliding door system would cost millions to install, and that doesn't cover maintenance costs once they're installed. And wouldn't the suburban legislators demand that the same thing be done at LIRR and Metro-North stations? It would cost billions. Not going to happen.

2. Many platforms are too narrow to accommodate platform barriers such as 72nd St and Wall Street (2/3)

3. Many stations are built on curves.

4. The doors of the barriers require lots a small motors and like escalators in the subways - break down frequently and take a long time to repair.

6. There are no many other parts of the subway that need capital improvement, this will never get to the top of the pile.

In some stations, the sliding doors would be aesthetically ugly. If they must be installed, I'd recommend keeping them at 4 feet in height.

Not to worry...it will never happen
The MTA can't even keep an escalator or time clock running for a full week without a breakdown.
Imagine the maintenance costs!!!
Imagine a $5 subway fare to cover it.

Anon no. 10: The sliding doors won't work out. 4-foot high doors would work even less. They wouldn't stop people from jumping or being pushed onto the tracks.

There used to be 4 foot guard rail fences that ran along the platforms at Grand Central, 14th Street, South Ferry, etc. (except where the subway car doors opened).

These were heavy (about 1 1/2" diameter) steel pipe rails, that are unattractive to vandals or thieves (not brass or aluminum).

They were simple affairs with NO motors.

That's right I remember those.
I think the problem is the MTA now shares so many different passenger cars built by all different company's & designs on same tracks.
The MTA is run by a bunch of morons and criminals IMHO. Half are Islanders. Anybody who been to "the Islands" can tell about that cultures attitude, education and work ethic.

I think the best thing to do is end the "sanctuary city" policy.
It will put a huge dent on all the criminals, free loaders and nuts from coming here for free stuff.
To bad stupid voters wont let it happen, they love there Democrats and free stuff. Want to win an election ? ..dismiss loans and offer free stuff to all the bums and brats like Obama.
Would would one leave open meat in your sleep tent in Yellowstone National Park ?

Sandy Hook Newtown coupled with subway shovers shows the problem is not guns but nuts: Mario Cuomo let the nuts out to blame Reagan's tax cuts.

Doors on platforms??? How about a PA system on all platforms first?

Yeah, well the MTA guys flipped when Seymour Melman told them they had to standardize their trains. They want a different maintenance crew for every station, no uniformity to make things work efficiently.

Gotta agree with 4 ft fences with openings for doors. The fence is low tech and can be easily installed or removed without great cost. Its low enough for motormen or conductors to peer out of the operator cabs and eyeball the platform

Doors are probably the most impractical and unimaginative alternative out there. Not to mention expensive.