Poletti Plant to be demolished 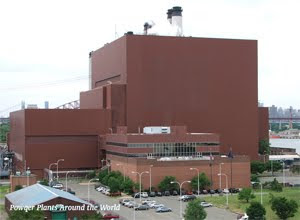 One of the city’s dirtiest former power plants is being razed to the ground, ensuring that it cannot be resurrected to once again pollute the air in northwestern Queens.

The Charles Poletti Power Project, located off 20th Ave. in Astoria, is to be dismantled in early 2013, elected officials said Tuesday.

The facility, which began operation in 1977, was shuttered in 2010 following a lawsuit and years of sustained community opposition.

Authority officials did not immediately respond to repeated requests for information on Tuesday.

But Astoria and Long Island City still produce the bulk of the city’s power supply — a fact bemoaned by local environmentalists who blame the area’s high rates of asthma on the facilities.
Posted by Queens Crapper at 12:33 AM

Is that mafioso doctor going to build his condos there?

Hey, when my father was a child, there was a 'producer gas' plant there in Astoria. Wonder how THAT would fly today? (snort)

For those of you who don't know what producer gas is...
At one time it was HARD to ship natural gas, so what they would do was make coke - aka take coal, and light it on FIRE on a low oxygen atmosphere - the gases driven off out of the coal are 'producer gas' (or 'town gas') and is why you see in the old cartoons about 'sticking your head in the oven - the gas was super rich in carbon monoxide. Anyway, once most of the gas was driven off, the coking ovens would open, and the tons and tons of burning coke would be dumped into rail cars, moved some distance, and loaded into the power plant

Natural gas, and the corresponding sized and shaped fuel burners, would instantly render such a plant bankrupt. However, those plants used to produce the raw materials that the consumable solid carbon electrodes in electric arc furnaces use. We now need to import that.

As for where to put electric plants, there are few places in NYC where you can site a giant power plant. You need to be near the water or large roads to get the equipment in. You need a large site for the plant. Then there's the proximity to gas pipelines and electrical distribution. The brownfields in western Staten Island is a possibility. There's already a power plant there, with the gas pipeline and electric distribution nearby. A creative solution may be a power plant on a barge or ship, and anchor it in Rockaway Channel or Hudson River.

"But Astoria and Long Island City still produce the bulk of the city’s power supply — a fact bemoaned by local environmentalists who blame the area’s high rates of asthma on the facilities."...Well, Ms. Environmentalist, why did you move there in the first place knowing this? Maybe next you'll move under the glide path at JFK and be surprised aicraft land every two minutes. Not very bright are you?

Astoria is gone! It's been Manhattan east for decades!

If you want a quieter suburban lifestyle, then move east. Nobody is going to down zone the waterfront!

LIC-Astoria will get more congested as the years go by...and that's an irreversible fact!