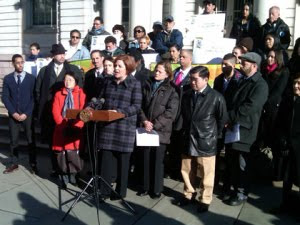 The program will give immigration officials access to fingerprints of undocumented immigrants in local jails, including those in New York City.

Along with other City Council members, Speaker Christine Quinn is proposing local measures to stop federal authorities from deporting immigrants Quinn and her colleagues define as posing no threat to the safety of the city.

Those offenses include loitering, prostitution, or driving without a license.

Yes, let's keep the hookers and people who can't drive. Great idea.
Posted by Queens Crapper at 12:21 AM


Is this woman out of her mind?

Illegal people should be deported, even if they have no priors.

Don't only send back home Latin Americans but also any kind of Asians, Arabs, Jews, Europeans or any other that is here illegally.

Do you think that in those countries they would allow you to stay illegally just because you are a US citizen?

"Posing no threat to the safety of the City". I guess Ms. Quinn and her collegeaues are comfortable making that call.

These politicians are pathetic.

Some of you voters are even more pathetic!

Why do the legal and law abiding residents of this city put up with this crap from pandering politicians like Quinn, how can it be for the betterment of this city. When are they going to start holding these criminals accountable and expect them to follow our laws and customs. And I am from a family of immigrants who were proud to become citizens

Unreal, anything for a vote or a schmooze .

And yes, people at election places ARE letting these illegal criminals vote.
There is also a schmooze agenda.
For some strange reason these Mexicans and Central Americans have an extremity high gay population and males with mental health issues.
Ever have drive down Roosevelt after dark ?
1/2 the population on the street must be prostitutes, Transvestites or drunks !
Far worse then ever seen in Times Square in the 70's

Illegals have more rights than citizens, and get more freebies, including health care. It was not Asians that destroyed Flushing, it waas ILLEGAL Asians.

It was your elected officials and CB#7 that destroyed Flushing.

They took money from Taiwanese and looked the other way while they established their colony here.

And you put them in power by voting for them!
Stupidity and apathy is the enemy of democracy.

The inv-Asian of Flushing couldn't have happened without its citizens handing over the town.

Once again, the word Tweeding does not mean over development, but pandering to immigrant and similar groups for votes and support.

Dates from the days of Boss Tweed.

This is a classic example of tweeding.

I have no intention of voting for the fat rug muncher. I can't do less than that.

"Why do the legal and law abiding residents of this city put up with this crap from pandering politicians like Quinn, how can it be for the betterment of this city. When are they going to start holding these criminals accountable and expect them to follow our laws and customs. And I am from a family of immigrants who were proud to become citizens"

They're called "Democrats" and they own this town. So shut-up and move!

Most citizens are ignorant, spineless, pandering cowards. They will never raise their voices to make any waves.

So where among them can one find the instruments of change?

Thus it be..."the silence of the lambs"...who are destined to grace a politician's dinner plate.

These sheep kept on re-electing Bloomberg...and now Speaker Quinn is on the verge of becoming our next mayor.

She's sharpening up her teeth and she looks very hungry.

Wise up, you dumb bastards! Vote ALL incumbents out!

They have already committed a crime by coming here illegally. Generations ago, we needed people in this country to help it grow, but we have now out grown ourselves. We don't need any more people who are not willing to work hard for this country. Most illegals come here and work off the books sending their money "back home", while collecting city help. This country can't afford any more free loaders.