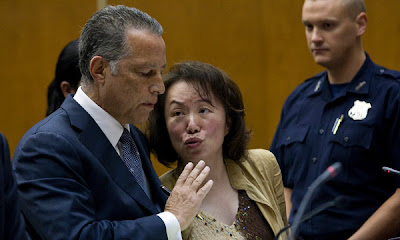 She was petite. Elegant. Forceful.

“She could walk into a room and dominate a conversation,” said Jonathan Derek, a former assistant of Dr. Chang’s who attended dinners where Dr. Chang entertained potential donors. “Just by being there, she was the center of attention.”

She made her home in Jamaica Estates, Queens, in a $1.7 million Tudor-style house with seven bedrooms, maid quarters, stone fireplaces and soaring ceilings with skylights.

Yet in many ways, Dr. Chang was a woman out of place.

As her legal troubles mounted in recent years, she found friendship among bartenders and casino bus drivers. She would curry favor by lending money to people from Chinese communities in Flushing and to fellow gamblers at the Foxwoods casino in Connecticut, where she was spending more and more time.

And to her embarrassment, she never learned to speak English fluently, writing that she felt isolated from her colleagues, like a “money tree” that was shaken but never nurtured.

Dr. Chang was hired at St. John’s not long after graduating from its master’s program. Three years later, she was named a dean. A big part of her job was to keep the Taiwanese money flowing.

Closer to home, she helped arrange trips to Taiwan for political delegations from Queens that included Donald Manes, the Queens borough president who committed suicide after his role in a far-reaching bribery scandal became public in 1986.

Sid Davidoff, a lawyer, lobbyist and longtime friend of Mr. Manes’s, recalled that Dr. Chang served as the borough president’s political liaison to the Asian community in Queens. Dr. Chang was so close to Mr. Manes that when she renovated her Queens mansion, she asked him to manage the project, according to a former university colleague of hers who was not willing to be named. There was speculation that some of Dr. Chang’s business relationships extended into her personal life.
Posted by Queens Crapper at 12:25 AM

Read the whole article--crazy stuff: sex, addiction, corruption, murder . . . It would be a great made-for-tv movie, except that she's Chinese and Lifetime would probably cast someone like Susan Lucci to play her. Dr. Chang was no better than a mafioso. A true Dragon Lady.

Who would play Manes and Nussbaum?

"A judge who later considered the matter instead ordered her to the federal jail".

it is reported in other news articles that his name was Bayside's boy wonder Nicholas Garaufis.

How this Dowager Empress Dragon Lady Gangman (isn't that the latest term?) Mobster took over a nice catholic college is a tribute to them (Ancient Chinese Secret!) and a shame for all of us who took pride in the St John's legacy. What in Christ's name were they thinking?

Wasn't Cecilia Chang the "travel agent"...who arranged the "famous" trip...that Manes, Ackerman and his associates, along with Tommy Huang and certain CB#7 members took to Taiwan?

What was the purpose of that little junket to Taipei?

This is ONLY the tip of the iceberg!

Much more will surface, no doubt.

Maybe CB#7's former chair, Regina Colletta, should be questioned. Did she accompany them to Taiwan also?

Subpoena Myra Baird Herce. She was a big player back then. Manes installed her as head of his Downtown Flushing Development Corp.

Chang had to be the intermediary for laundered Taiwanese money flowing into political campaigns and the pockets of corrupt local officials 30+ years ago.

She was about to unmask the crooked crew
(that's still alive) . I DON'T BELIEVE HER SUICIDE!

She was WHACKED before she could open her mouth even further in court!

The timing of her taking her own life is a bit too much of a coincidence to believe.

By the time this investigation is over, both Nussbaum and Schenkler might wind up in jail!

Now who will play Schenckler.

LOL!...Multi Media...the medium is the massage, ain't it?

H-m-m-m,
from boro hall lawyer to a federal judgeship.

What did Nickie-boy Garaufis do for that kind of high position?

Let's string some names together and see what kind of political daisy chain we can come up with.

Put these names up on the board, like they do on those TV crime shows, and let it all percolate.

Are they guilty, and of what?
A lot of dots remain that need connecting.

Hey you feds...don't pass up any of Queens Crap's interesting leads for you to follow up on.

Stay tuned, and good luck on the hunt!

When I was at St. John's in mid- and late 1980s, there was an Asian studies professor (of American descent) who didn't get along with Chang. From what I recall, she was angry that he insisted on teaching Chinese history - i.e., the history of the mainland - rather than just Taiwan. Apparently she was so pro-Taiwan that she wanted students to believe that Chinese history began in 1912 or 1949. She was a bizarre woman whose power was inverse to her ability, except when it came to bringing in money from Asia.

Should have also said that that Asian studies professor had to transfer to the History Department to get away from Chang.

I STILL don't think that Donald Manes' suicide was a suicide. Maybe he was whacked too...and his wife Marlene cooked up the suicide story.

Incidently...Cecilia Chang was seen leaving Manes' home 3 days prior to his apparent "suicide".

That greedy power hungry SOB was obviously the beneficiary of laundered Taiwanese money.

I'm sure that "granny" Shulman continued to receive "the Donald's" share after his death.

Maybe the Italian mob has ties with St. Johns.

And maybe they and the Taiwanese tongs have a nice operation going on to divide foreign money for various purposes.

Has anyone gotten a look at SJU's Joseph Sciame?

If he doesn't look like an ice cold mobster, I'll eat my socks.

Actually, I found the most interesting parts of the whole saga to be the allegations about Fr. Cahill, the former St. John's president: a big gambler and an affair with Chang? BTW, Cahill was sent to St. John's (from Niagara I think) by the Vincentians in the mid-1960s to quell a divisive faculty strike, since the previous president was too nice and Cahill had already developed a tough reputation.

Did not in 1988 Arkansas Gov. Bill "BUBBA"Clinton have a "Money Tree",Charlie Trie. the restaurant owner across from the state capitol ? Did not 90 Asian bundlers have to leave the U.S. after he was elected P.O.T.U.S. in 1992 ?

Was not Judge Garaufis appointed by W.J.Clinton ,after a position with the F.A.A.?