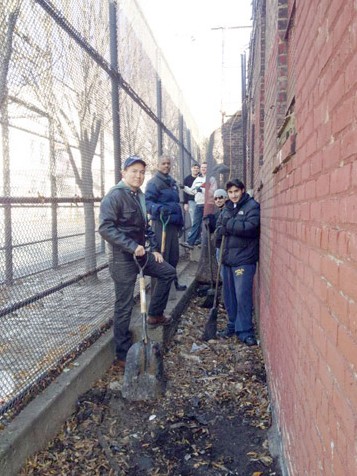 On December 14, Councilmember Peter F. Vallone Jr. and his staff removed more than a 1,000 pounds of garbage from Sean’s Place Playground in Astoria. An alley next to the neighborhood park has been a constant target of litterers, and some of the trash has remained there for decades. Among the debris were wooden planks with rusty nails, glass bottles and needles. Located a few blocks away from Steinway Street, the park is frequented by many neighborhood children.

Previously, the area behind Sean’s Place was closed off by a fence and could not be accessed to perform a cleanup. However, the Department of Transportation recently replaced the fence with a gate that could be opened and locked with a key, allowing for regular maintenance of the area.

“It became a place to get rid of junk, but it isn’t anymore,”Councilman Peter Vallone Jr. (D-Astoria) said.

The improvement started in April when the community organization contacted Vallone. His office led by his legislative director, Jonathan Szott, started talks with the DOT and the Parks Department. Now nearly eight months later a solution has been reached.

“All the agencies worked together,” Vallone said, adding that coordinating with multiple government organizations often takes time.“But now we can get to the space without contacting everyone.”

So let me get this straight...

This dumping has been going on for decades.
Peter Vallone, Jr. has been in office for 11 years.
He only noticed the problem this past April when someone pointed it out to him.
It took him eight months to get the DOT to open the gate so it could be cleaned.

Pete sounds like the ideal borough president candidate, dontcha think?
Posted by Queens Crapper at 12:10 AM

Yes, he's the ideal candidate for boro prez: the top banana, the chief monkey in a barrel of monkeys. He's Greco-Roman art too.

Why do the headlines always portray Queens pols as great fathers of their community in the same mold as North Korea or Kazakhstan strong men?

Those politicians are more bumbling idiots of limited sophistication rather than paragons of virtue and civic action.

Little late Petey! Your nemasis Costa was already there months ago cleaning things up.

Where is that polished gem of Temanent that you picked as your replacement? Still trying to palm off on someone Falco's junk?

Is that the same one that Vallones have been using to shovel their political crap and broken promises around Astoria, since the dynasty first held power there?

It must be American made, because it's held up real good all these years.

The park used to have a person lock the gate.

But consider the level of civic participation in that area:

it involves little more than speaking at the community board from hell on getting a variance for more development.

The state of that park is no surprise.

Anything else gets ignored, a sneer 'move to another neighborhood', or a photo op by a local pol expressing empty concern.

For the record: this park has been cleaned up and renovated at least twice before.

Clean out the Vallone dynasty if you want to detoxify politics!

That leaves the Staviskys. They need to be shipped offshore to a dump site

Amen to that. Tony Barsamian, publisher of the Queens Gazette, the most egregious politician ass-kissing paper there is, are you reading this?

On our knees begging said...

Peter: please now get your "ass in gear" and save the Steinway Mansion BEFORE any secretive "deal is done" and the cranes and bulldozers arrive.

C'mon do the right thing here.

Compare the Crapper Vallone photo with this one.

There's enough toxic material being dumped off-shore now. What do you have against the fish?