Living in the crap of luxury 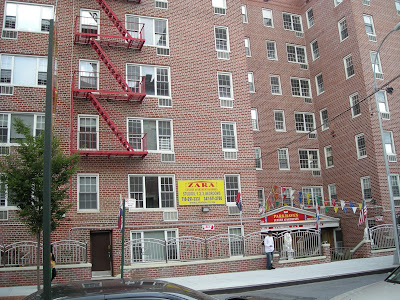 Just for laughs I had to include photos of The Park Haven apartment building (probably circa 1960's-70's) near King Manor Park, refurbished by the very questionable & shady real estate agency, Zara Realty (who has several violations with other apartment buildings in Jamaica). Now you wonder why would I include that. Well first off I am glad to see that these regular looking apartment buildings are a major step up from the new third world/ghetto crap apartments that are being built today all over Jamaica, BUT if you look closer at the sign it states "Luxury Apartments". 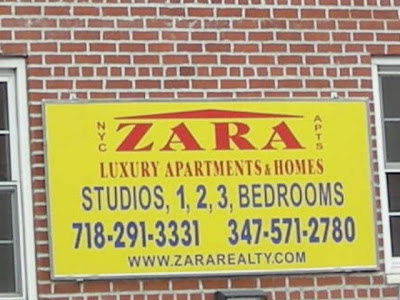 Only in Jamaica could a very questionable company such as Zara Realty pass off these regular apartments as "Luxury" and then probably charge an arm and a leg for them. I guess if for years you lived in a hut and you shit in a hole in the ground outside, then yes it would be considered "Luxury", but to pass these regular apartments off as "Luxury", please, as the 80's TV show was titled, GIVE ME A BREAK! 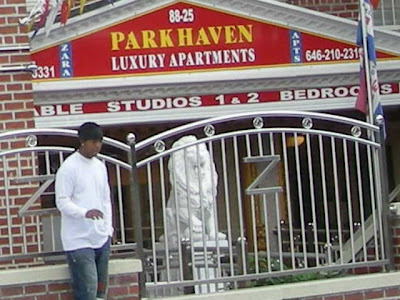 I guess that is the 24 hour doorman standing next to the authentic statue of a lion, which I guess the statue screams out "Luxury" as do those God awful big metal fences that look like headboards for beds that seem to be so prevalent in many of these new homes being built in Jamaica. Love the Z on the fence.
Joe Moretti
Posted by Queens Crapper at 12:11 AM

Advertising: The practiced art of deception.

Were you expecting honesty from a landlord?

The are luxury to a 3rd worlder.

Soon to be a luxury crack den and baby mill.

Yo yo yo - free weed delivery by the authentic door-person manning the sidewalk!

There's no definition of "luxury"-- why are you surprised? It's every person's opinion. Honestly, have you ever seen a sign that says "middle class rentals" or "lower class/poor rentals"?

I propose the word "luxury" be banned from the real estate lexicon.

Oh, the problems of the 1st worlders.

It's rite next to Jamaica estates they Probaly want people to think they on the same level .... lol.... smh..