Only 15 more months of this crap 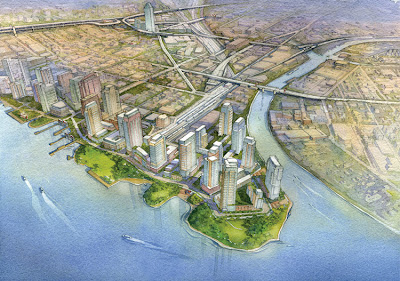 From the Architect's Newspaper:

The Bloomberg Administration is arguably one of the most pro-development governments in city history. Since he took office, the Mayor has used city agencies to unleash the forces of New York real estate while also steering those forces to meet goals for a cleaner, greener, and more equitable city. PlaNYC, the catch-all name for the Mayor’s bundle of 132 sustainability initiatives, creates a framework for over 25 city agencies to collaborate on a vast array of projects, from the new East River Ferry service to a $187 million investment in green infrastructure. While some programs such as MillionTreesNYC, are making streets leafier one tree at a time, many of the Mayor’s initiatives have reshaped the city in profound ways. As the administration counts down its remaining days in office, AN checks in with the individual agencies whose projects have had the most impact on development in the city.

Oh wow, sounds like another puff piece about how great Bloomberg's army has been for NYC. Yawn... Funny how none of the massive failures are mentioned. Olympics, Destination Parks, Million Trees, West Side Stadium, etc.
Posted by Queens Crapper at 12:28 AM

I've got your remaining days in office
marked on my refrigerator calendar, your honor.

And it's--hip, hip, hooray--
when your skinny butt is finally gone!

Not getting the Olympics nor building that stupid football stadium were not "failures" for New York City -they were a victory for common sense.

Nothing will change as long as City Council has life and death over your communities and you are willing to cut your neighbor's throat for their smile.

The mayor is a creation of the council, as will be his successor, Chissy Quinn, who despite her contemptuous condescending tone is the public's favorite to be our next mayor.

Well, as chronicled here, the city plants trees and then doesn't take care of them and they die. Or they cut them down for unnecessary atriums. Or they allow developers to rip down entire groves of trees. So it's certainly not a net gain of 1M trees.

Unfortunately, I don't think that there's any provision in the City Charter for impeaching anyone. If I'm wrong, I'm with you as well!

Anybody know the answer?

The Governor can remove the mayor of a city, per §33(2) of the Public Officers Law:

"The chief executive officer of every city ... may be removed by the governor after giving to such officer a copy of the charges against him and an opportunity to be heard in his defense."

Anonymous said...
The Governor can remove the mayor of a city, per §33(2) of the Public Officers Law:

Okay Cuomo, let's get started. What's that you say? He's got you in his pocket as well? AND AG Schneiderman? Why does that not surprise me?