Is this a plan that will work? 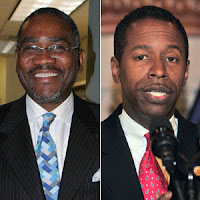 Queens County District Attorney Richard Brown, Congressman Gregory Meeks, and State Senators Malcolm Smith were amongst nearly a dozen pols who met this afternoon in Queens to lay out their plan. It's based primarily on educating people about the dangers of guns, and letting them know they can sell their illegal guns to the police without fear of getting in trouble.

...below is how Queens pols think they can "end" gun violence in New York City:

▸ Build a community coalition to deliver the clear and unequivocal message that carrying guns and committing acts of violence in Southeast Queens is unacceptable. Reinforce the message through clergy sermons, community rallies, events, lectures and concerts with support and participation by community and business leaders, elected officials and prominent individuals in the media, sports and entertainment fields.

▸ Educate community members about the fact that guns can be turned into local precincts for a cash payment of $100 a gun and increase the number of guns surrendered.

▸ Develop a public relations campaign encouraging community members to report illegal guns and violent crimes and cooperate with law enforcement by asking them to "Step Up for Your Community - If You See Something, Say Something." Change the culture and create concrete incentives for local residents to stand up and speak out about crime and violence that impacts on their neighborhoods and families. Implement a variety of mechanisms to facilitate communication with law enforcement about dangerous situations or crimes - including hotlines, text messaging, or community/law enforcement liaisons.

▸ Support legislation that will limit access to assault weapons, handguns and high capacity ammunition clips by criminals and individuals with mental illness;

▸ Improve communication and dialogue and foster trust between law enforcement and residents of local neighborhoods.

▸ Work to close down illegal businesses and limit the hours of all night establishments that are breeding grounds for underage drinking, gang activity, drug trafficking, prostitution and violence.

▸ Provide more information to community residents about existing programs and services and how to access them.
Posted by Queens Crapper at 12:36 AM

All of these so called politicians have been turning a blind eye to this problem for decades.....and now unfortunately it's too late to stem the tide.

In New York State, the police have no duty to provide police protection to any particular individual. The Courts in New York have held that "generally, a municipality may not be held liable for the failure to provide police protection because the duty to provide such protection is owed to the public at large, rather than to any particular individual" (Conde v. City of New York, 24 AD3d 595, 596 [2005]; see Cuffy v. City of New York, 69 NY2d 255, 260 [1987]).

As the Chair of the Public Safety Committee of Manhattan Community Board 12. I will be holding a Public Hearing in September 2012 on NYS Senate Bill S1427 & S1863 with an emphasis on self-defense education & firearm training for women.

Bill S1427 PURPOSE: This proposed constitutional amendment would provide within the New York State Constitution for a right of the people to keep and bear arms for traditionally recognized purposes

Bill S1863 PURPOSE: This legislation would remove a gun licensing officer's ability to deny or restrict the issuance of licenses to law abiding citizens who have successfully undergone the state's strict application process and appropriate New York State and Federal Bureau of Investigations fingerprint background check required under law. In addition, this bill will conform New York State law to current ATF requirements regarding background checks for firearms transfers.

September 12, 2012 at 6:30 PM at Isabella, 515 Audubon Avenue New York, NY 10040. If you live in New York State feel free to take a look at the information that I will be presenting as well as sign my on-line petition included at the link below. I hope that you will come out and support me as I support you. Fraternally.

Queens County District Attorney Richard Brown, Congressman Gregory Meeks, State Senator Malcolm Smith and most of the rest of the local politicians and city/community leaders in Jamaica, as the 1st comment stated, have been turning a blind eye to this problem and many other problems (destruction of homes, building of cheap apartments, garbage/trash/illegal dumping and of course violence/gang & drug activity) for decades and now all of a sudden they want to come up with a "plan". Where were all of you at the very beginning stages when most of these issues could have been nipped in the bud, NO GODDAMN WHERE TO BE SEEN.

Most of of you have done SHIT to address and solve Jamaica's problems and now it seems to be in a state of chaos where you are forced to at least say something. Hell none of you ever really addressed the garbage/trash/litter problem here in Jamaica till I started bringing it up day after day after day and you still are not really addressing it. The leadership (and I use that term loosely) for the most part in Jamaica has been pretty much medicore at best and now we are seeing the results of decades of negligent and poor leadership.

This community needs visionary leadership to clean up Jamaica, improve the quality of life, fix the infrastructure, crack down on illegal building, improve zoning laws, attract & bring in quality businesses and come up with ideas such as the Barclay Center in Brooklyn or entice someone like Jet Blue, who moved their offices to Long Island City or attract artists and educated young people to the area. All of these types of thinking help improve & strengthen a community, bring in quality people, increase property values and eventually toss out the bad element in our neighborhoods that have been holding our community down for way too long. Ideas such as "Buy Back Guns" does pretty much nothing, it might look good on paper but in reality is solves NOTHING. These types of tired and old ideas are not working.

The upstanding and middle class community here deserves much better than some of these mouth pieces and photo-op whores who show up after all hell has broken loose, talk a big talk and then do JACK SHIT! And replacing the low class people here with a new influx of very low class third world immigrants who just add to the problems is not the answer, that is not called progess. All you need to do is look at some of the stretches on Hillside Avenue to know what I am talking about. You think that shithole avenue is going to attract quality people.

You all need to stand tall, grow some major balls and start addressing, and more importantly, start SOLVING problems and not address the problems after they have gone so far out of control. Part of the word leadership has LEAD in it, start doing it.

If people have to be "educated" about the dangers of guns, then maybe that is an indication of a much larger problem with our society.

This is a national problem
Most guns come from out of state
The draconian gun laws have only netted the users not the suppliers. Most of whom are legal dealers
Only MSyor B has it right.

Yes, a concert will help perhaps 50 cent will help he's a good role model. And for sports figures I suggest ray lewis and plaxico buress for starters

(1) Suspend the 3rd through the 8th amendments.(2) Dusk to dawn curfew.(3) Search every home and apartment.(4) Detain without trial everyone in possession of an illegal weapon. (5) Erect checkpoints and a barrier wall.

Anything short of that and you are just joking about eliminating gun violence.

$ound$ to me that they are talking about a government program that will u$e lots of taxe$ and give appointment opportunitie$ to their friend$.

why did'nt the press state that the 3 indivuduls that were killed "machined gunned" down on Sprinfield Blvd, state that it was directly across the street from the FRONT entrance a middle/high school!!!
-Does'nt anybody realize Malocolm smith was vice president of a mortgage company, that gave out countless "bad mortgages" to the people of South east Queens???