Brown's crew a bunch of screwups 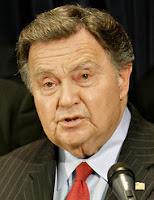 Prosecutorial misconduct has become a legal sore in plain sight. Marvin Schechter, a defense lawyer and chairman of the criminal justice section of the New York State Bar Association, wrote a column recently stating that misconduct stood revealed not as a trickle but as a polluted river.

He blamed district attorneys who valued conviction rates and tough-guy images over adherence to the rights of the accused. “Assistant district attorneys do not emerge from law school with a genetic disposition” to hide vital material, he wrote. “Instead this is something which is learned and taught.”

Prosecutors loosened howls of indignation. Prominent prosecutorial sorts have written letters in the past month and intimated they will no longer serve on committees if such calumnies stand.

Harrumph and all that.

AS Mr. Rudin noted in his filing, in 70 known cases of prosecutorial mistakes and misbehavior in Queens over about a decade, the district attorney, Richard A. Brown, has disciplined just one lawyer.

And when he doesn't want to, he doesn't investigate.
Posted by Queens Crapper at 12:50 AM

But how many County pols did he go after?

This is Queens...
and outright crookery!

So, did you all expect benchmark performance and forward thinking in the dullard's frontier?

I live in Queens ONLY because I can't afford Manhattan.

But I take my stimulation on that "golden isle".

Can't he afford a better toupee?

What's he hiding under it?

"Ooops,
a few dollars blew out of Jimmy's fruit basket and just happen to have gotten caught under my toupee".

He chose not to prosecute anyone for the fatality that occurred on Queens Blvd. at The Huang's construction project.

how old is too old to work? die already you vampire. Die, Richard Brown, Die. you don't prosecute the real criminals because they are paying you money not to drag them through the criminal justice system. who got the retard in your office the job?

I saw a photo of Brown standing next to Our Illustrious Mayor the other day. Unless Bloomie was standing on a few telephone books, Brown looked to be a foot shorter then him!