Weiners are living the high life 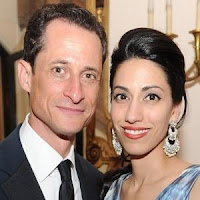 Anthony Weiner’s wife not only took him back, she took him back in style — moving with the shamed pol into a luxurious, $3.3 million Manhattan pad owned by a deep-pocketed Democratic donor, The Post has learned.

Rosen — who oversees the American Jewish Congress — is an influential international political force. He’s been a guest at the White House, flies the Clintons in his private plane, and has poured money into both Bill and Hillary Clinton’s election campaigns over the years, according to campaign-finance records.

He has also contributed several thousand dollars to Weiner’s coffers, and is a top Obama bundler, donating more than $500,000 to the president’s re-election efforts.

The market-rate rent on Weiner and Abedin’s 2,120-square-foot, four-bedroom, 3.5-bathroom apartment — where the disgraced pol has said he spends his days doing laundry and changing baby son Jordan’s diapers — is at least $12,000 to $14,000 a month, real-estate sources said.

A much smaller 1,476-square-foot, two-bedroom unit on a lower floor recently rented for $10,000, records show.

he reportedly has many millions of campaign donations stashed ,that he had been sharing with dem. pols. in need throughout the nation.

is it true that Rosen is living in Astoria ?

Show us the money Tony. And you better not be dipping into your campaign fund war chest....that would be illegal.

Old Snake In The Grass at it with innuendo and slander again.

Weiner's only wrong was resigning due to a case of delayed adolescence.

His only wrong? I'd say his wrongs are multiple.

Did some kinky shit online with multiple women while his wife was carrying his child.

Sent out a private picture publicly, dragging some poor unassociated woman down with him.

Lied and said he was hacked.

Used campaign money to send a private investigator on a wild goose chase.

Shamed himself, his family and his constituents when the truth finally came out.

As a federal government employee (just like Weiner was, and the wife supposedly is), I am familiar with the payscales. I noticed this interesting disparity a long time ago. They live on Park Avenue, vacation in the Hamptons, and oh by the way isn't her job in DC, with Hillary at the State Department? How does she do her job in NY? Do they also have a sweet house/apartment down in DC that someone is paying for? Lots of questions I'd like answers to.

But none of it was illegal, Crapper, so who cares?

Considering neither of them had a salary above $200,00 in their life...

I wonder what sort of investments created the cash to afford that $3.3 million apartment and the rest of their lifestyle.

Anonymous said...
Considering neither of them had a salary above $200,00 in their life...

Does this answer your question?

Yes. wnd.com is a source of unbiased, factual news.

NOW you're complaining about Saudi ties? I take it you were jumping up and down and screaming when George W. Bush was literally holding hands with a Saudi Prince. Com on, already. You guys are so gullible.

"You mean I can turn my Mitchell linden pad into a campaign headquarters for my district leaders race. Harry Call the unions i need some cash in my campaign account asap. the maintenence fee is due.

She just can't let go of her Weiner...
whatever he's done.

It never stops with these parasites.She is being groomed for future political office ......... in NYC,just like Deblasio. If the Clinton's like you,you're in. If they don't,you end up like Foster..........

Typical politician from the most notoriously corrupt district in the nation.
The man send explicit pictures of his penis, to woman, who could have been underage. Than lies and blames the opposition (a crime, by the way). Than after the truth comes out, that he's a lying, shifty, corrupt, destiny fiend. He resigns in disgrace.
The reward for this piece of trash is right out of the sitcom, lifestyles of the rich and famous. Cars, homes, luxury and splendor, and of coarse nobody knows how its paid for.
Very typical of NYC, particularly that district.

Nice to have friends this nice!

I hope the crib comes complete with complementary wi-fi.