Does anyone really believe this crap? 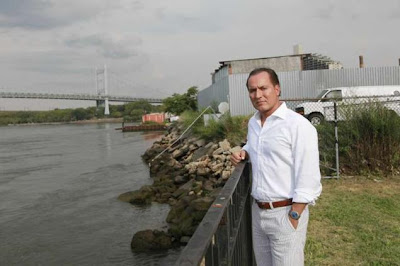 A trio of proposed residential developments could transform the western Astoria waterfront from public housing and gritty warehouses to 30-story towers, shops and manicured parks.

Alma Realty is talks with the city to build 1,800 units of housing and a promenade lined with stores and restaurants along the East River, officials told the Daily News Wednesday.

The Astoria Cove project, which would include four towers, assorted low-rise buildings and a supermarket, is to be located on an eight-and-a-half acre parcel of land along 26th Ave.

The owners of a four-acre site next door, occupied by a lumber company and a movie studio, recently announced they are looking for a development partner.

The development, which has been in the works for about five years, would include seven residential towers, a waterfront promenade and supermarket, said Andrew Moesel, a spokesman for developer Lincoln Equities Group.

“The Hallets Point project will bring many much needed resources to a community that’s been underserved for some time,” he said.

All of the projects require a zoning change which has to go before the City Council, and City Councilman Peter Vallone Jr. (D-Astoria) said he has reservations.

“Development is absolutely necessary for that community,” said Vallone, who lamented the lack of a nearby supermarket or bank. But “it will add thousands of people in area where the infastructure is already strained.”

Pardon me while I pick myself up off the floor from laughing. Vallone is part of a family that made their money from the overdevelopment of Astoria. Why stop now? Especially when the family lobbying firm is representing the developers? Maybe because that shit doesn't fly in the rest of the borough that he aspires to be president of.

When these projects come up for a vote, expect Vallone to be vehemently opposed, yet despite his adamant pleas, somehow the rest of the Council will vote in favor of them.
Posted by Queens Crapper at 12:12 AM

Has la famiglia ever ordered any 'hits"?

Certainly they've put out "contracts" on the neighborhoods they've ruined
by their long standing support of over development.

If this walyo goombah ever becomes Queens borough president, we can expect to see sellouts to developers rise to a new height.

Don Paulo will never shit on northeast Queens
because that's where he lives.

But Ass-toria will continue to be the Vallone toilet...except in that posh section near Ditmars that
Pete senior & junior live in.

You just don't get it Anon #1....
Astoria is an expendable neighborhood,
and it's been that way for decades and decades.

If you don't like living there, then move to northeast Queens instead of displaying your unbounded jealousy of it....time after time.

The Vallones have been around for 40 years. Why has it taken them so long to address this ? Come to think of it, why is it still taking so long to clean up their play pen?

The Vallones have always been pond scum!

Where they live is more than OK,
but they'll freely piss all over anyone else's nabe.

I have seen the plans and its not just 4 buildings people - how about a dozen monoliths - and its not 30 but 40 stories.

These buildings are built BETWEEN the Astoria houses and the East River. The water came up to the doorsteps of the public housing last fall when Irene paid a visit.

Astoria is a funny place.

No one says a peep about the Steinway mansion rotting on a hill, but let the Vallones shill for ol buddy Pistilli who wants to close a street for his latest eyesore, and friggin committees meet all over the community full of earnest young people lobbying for Vallone and Pistilli.

That shoreline of Astoria is (and has always been)
crappy.

What difference does it really make if this project
is built?

It'll be just another turd in the bowl.

Yeah those goombahs pissed all over that town too
with some of their typical ugly pretentious buildings.

What is it with Italians that they feel iobliged to rebuild ancient Rome wherever they park their asses?

It must be a form of overcompensation, just to prove to the world that they've risen above the class of sheepherders and farmers.

Yeah, Don Cheech...previously a goat herder
in the far hills of Cefalu.

You got to take a lot of things on this board with a grain of salt.

People say this about this and that about that. That's politics.

But think about this:

What is needed is a complete picture of all development projects that is currently proposed, and to have this presented to the community at one time ... along with something treating infrastructure support: current and future (with associated costs of course).

Have nice big pictures and diagrams, and make sure that copies are liberally distributed through the community.

Now throw THAT nugget into your coffee and try to drink it.

Famous Perrys I have known:

The real concern here is WHO is developing this property. Pay close attention to Alma Realty or Valiotis should one or both of them have anything to do with it. Forget the Vallone's or Pistilli. If you're complaining about them, wait to you start digging up dirt on the others! Take a look, it is not pretty.

Look, everyone knows that waterfront is mobbed up.

Be nice for someone to start to publish a list of owners.