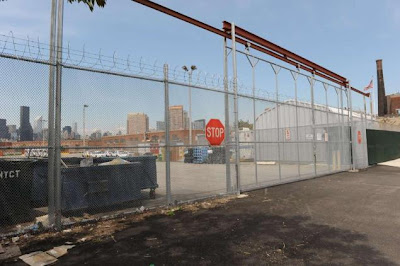 After years of delays, the city is seeking a developer to use profits from proposed condo towers to finance new parks along the spacious north Brooklyn waterfront.

Proceeds from the land sale would help the Bloomberg administration find a new spot for the MTA vehicles and repair materials being stored at the Greenpoint site on 65 Commercial St., according to the Request for Proposals issued Aug. 16.

The city’s Economic Development Corporation’s plans to develop the 275,782 square feet of valuable waterfront property have been mired in red tape and sudden budget cuts for the past seven years.

Under the new plan, developers must submit their proposals by Aug. 30, but it will likely take months before a group is chosen and years to build up the site.

The city has had a hard time finding a new home for the MTA warehouse.

In June, Carolee Fink, senior advisor to Deputy Mayor Robert Steel, testified at a City Council hearing she could not promise the MTA vehicles would be relocated from the site.

You'd think the city would have its ducks in a row before they promise the public anything. But they likely never had any intention of providing this park in the first place. They just dangled that out there to get approval for zoning that would help Bloomberg's developer pals.
Posted by Queens Crapper at 12:22 AM

Don't trouble them with this Crappy.

Yes we should have Brooklyn folk in Queens telling us the promises we get today (like Noguchi's 'visioning process' or the Vallones' Hallet's Point farce) will be sorry assed mess in 10 years.

We CAN learn from other's empty promises. Only when communities ACROSS THE CITY start to work together can be stop this bullshit.

Naw, we are all over each other as soon as someone DARES stand up and question things in Queens.

Remember when the Honest Joe, the Good Humor Man's Ice Cream Truck shows up, get at least sprinkles on your cone.

Did you say, "Beware of false promises"?

Oops, for a moment I thought this was a post about Dan Halloran.