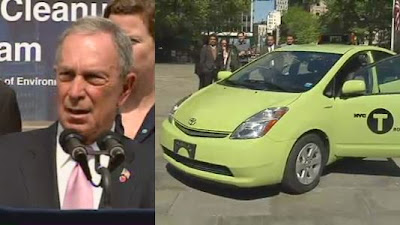 Mayor Michael Bloomberg's plan to expand taxi service to all five boroughs would not just have been a boon for riders. It also would have put an extra $1.4 billion in the city's coffers.

The money would have come from the sale of 2,000 taxi medallions, but that source dried up after a state judge's decision on Friday blocked the taxi plan.

"What it means is, since we really don't have the opportunity to raise taxes, it means cutting expenses and we will continue to do that," said the mayor.

The city planned to collect another $365 million the following year from the medallion sales and another $460 million in fiscal year 2015.

State Comptroller Tom DiNapoli and City Comptroller John Liu have both said it was risky for the city to bank on that money since it was tied up in a court case. The mayor, though, remained publicly confident that the city would prevail in court.

The city did not prevail. The judge found the city at fault because it did not get approval from the City Council to expand taxi service. Albany lawmakers signed off on the deal instead.

"We still think that we will win on appeal, but it's going to be a real challenge," said Bloomberg.

The city was already facing a $2.5 billion dollar budget deficit for next fiscal year.

As for the possibility of layoffs, the mayor said he had no idea at this point Monday. But he noted that if the city has less money, it will not be able to employ as many people, so it appears that some jobs will be lost, either through attrition or layoffs.

"Attrition doesn't work very well in a slow economy. You got any other questions?" said Bloomberg.

The 3rd term fiscal genius and his minions at the City Council that NYC just could not do without gambled on something that was not a sure bet and now we're all going to suffer for it.
Posted by Queens Crapper at 12:03 AM

I can't believe this dumb idea would have generated 1 billion dollars. I just sounds totally impossible on the face of it.Now if Blunderberg were to tax every bicycle in the city, with say a $100 annual bike lane user fee, we'd make $zillions.

Even if it generated a billion dollars in the first year from the sale of medallions, it would not have brought in that much in subsequent years and regardless of what year, was insufficient to close the budget shortfall. What plan does Bloomberg, that great fiscal genius who was going to save the city in his third term, have to plug the budget holes?

If we all know know that Bloomberg is so full of shit, just imagine how much he KNOWS he is full of shit!

Meanwhile they plan to give money to illegals. They are going to destroy our life, these Democrats...The misery in the parks, the violence in the streets, and so on, all due to illegal immigration.

What a country. A mayor can wave a magic wand and make $1.4 billion appear and a judge can make it disappear.

The price of a taxi medallion


There are more than enough cabs in the city already without counting the gypsy cabs and the infamous dollar vans here in Flushing.

The city should be limiting the amount of cabs instead by not awarding any medallions for the next 5 years.