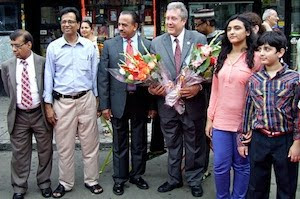 A group of business owners who decried the 37th Road pedestrian plaza in Jackson Heights after it opened have come around and launched a group to act as stewards of the new public space. This turn of events comes after persistent work by Council Member Danny Dromm’s office and local merchants, who are now working together to ensure the plaza is a long-term success. The plaza’s undeniable popularity as a gathering place also hasn’t hurt.

A few months ago, Internet Café owner Agha Saleh and Bombay Chat café owner Shazia Kausar were two of the business owners unhappy with the new plaza. Saleh was quoted in the New York Times saying that it had contributed to crime in the neighborhood, while Kausar told the Times Ledger that soon after the plaza opened in October 2011, her business had dropped and she was having trouble paying employees.

Citing a “gap of communication” between business owners, DOT, and plaza supporters when the project was implemented, Saleh credited months of work by Dromm’s office and DOT to address the business owners’ concerns. “We’re really proud that we brought people on board,” Saleh said.

Good for them. DOT generally thinks they know better than you do what's best for your community. It's good to see they're finally listening to people. Better late than never.
Posted by Queens Crapper at 12:38 AM

When is this City going to learn that change by fiat is a bad idea?

Awww look at that! The politician with flowers.

Can anyone explain to me how goodness and badness is determined by a hack's blessing?

Are our lives so shallow that we need that element to justify everything public?

"DOT generally thinks they know better than you do what's best for your community. It's good to see they're finally listening to people."

Actually, no they didn't:

The change can be attributed in part to its aesthetic improvement — it has been dressed up with plant-life and better seating and tables — and also to a larger DOT traffic plan the plaza necessitated that funneled vehicular traffic to the businesses, according to Streets Blog.

DOT had to reconfigure their plan because they didn't know what the area needed the way residents and merchants did.

There is a very important statement in this story that we should all take notice of.
"Saleh had some harsh words for some of the reporters who wrote about the plaza. “A lot of press people came in and they took our interviews and they took our quotes and changed our positions,” he said."

"It's good to see they're finally listening to people. Better late than never."

They made these changes over 4 months ago.

The plaza was put in place a year ago and the DOT took months to realize they fucked it up, do they wasted more money fixing it. And on top of that, the merchants formed a nonprofit that the tweeders will funnel money to, on top of the money given to the Doe Fund to clean it. What a win for taxpayers!

Re the supposedly twisted quotes...these folks showed up with protest signs at meetings and were interviewed on TV and said the same things that were quoted in the papers. So me thinks he is FOS.

Big deal!
Another political feather in the cap (or ass)
of Danny Dromm.

It's still a "bustling, vibrant"...and all of the euphemisms used to describe a ghetto nabe...that you've got to navigate through...until you finally enter the promised land of the Jackson Heights historic district.