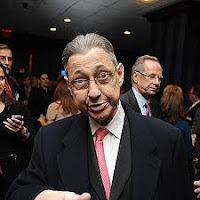 The powerful Democrat's bill follows the Obama administration "Dream Act" initiative this week that defers deportation for young illegal immigrants and makes it easier for them to get better jobs and pay for college.

If made law in New York, Silver's measure could greatly influence the presidential debate. The state is home to a large and growing group of legal and illegal immigrants and has some of the nation's highest concentrations of public and private colleges.

Of course, let NYS taxpayers foot the bill for improving the lives of people who aren't supposed to be here in the first place while their own wages and quality of life continue to decline. It's not Silver's money and he could gain some Democratic votes from this, so what does he care what we think?
Posted by Queens Crapper at 12:38 AM

sheldon says drop dead to legal immigrants and american citizens who are ny's 8.3 % to 10.5% unemployed.

as long as he helps to elect more progresso/socialists in NY, who have HI-JACKED the once proud democrat party.

Sure, break the laws of the US, sneak into the country, your kids overcrowd our schools and get a free handout thanks to the idiot taxpayers of NY. Keep voting for scumbag Democrats like Sheldon Silver.

Just like the orginal hater of American citizens, pro-immigration, key player in the passing of the Immigration and Nationality Act of 1965 and one of god's "chosen", Emanuel Celler, Mr Sheldon Silver wants to see America go from a first world technologically advanced society to a 4th world primitive shanty town.

I consider to move outside the state. I already pay enough for legals.

Good luck with that Sheldon!

If they can't even get beyond high school, what makes you think they are going to succeed in college?

That tidal wave of Latino cancer and AIDS researchers, astrophysicists, electrical engineers, and architects should be arriving any day now!!!

Silver is behind the Nightmare Act - send him to Mexico!

You aid them out of your own bank account Shelly!

You'd better import your votes,
because us "old timers" are too wise to your chicanery and would never vote for you.

Only ignorant newcomers will.

Sheldon is another Democratic tool. NY does not want to deport illegals saying it is a Federal issue. yet they want to enable illegals to garner future voters. They come to the suburbs and have many kids. Because we have a 14th Amendment they are automatic citizens. So in turn they get heaps of Welfare and food stamps to support their brood. More money out of middle class pockets.

The with grant money it is free. NY is in bad shape but they have free money for illegals? Plus allowing them to get loans means they don't have to repay if illegal. WHy repay when you have no ties and can take your education back home. Guess who has ot make up that loss. The good citizens of NY who have their own loans to repay. We can't just get up and move to Guatemala.