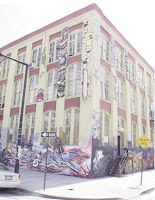 The owner of the 5Pointz building is anxiously awaiting approval of a demolition permit by the city Department of Buildings to proceed with plans to develop two high-rise residential towers at the site.

The graffiti covered 5Pointz building at 45-46 Davis St. is facing a wrecking ball under a plan that calls for two highrises– 41- and 47-stories that would feature a number of amenities, including a gym, media center, swimming pool, shops, restaurants, a supermarket, a park and open air concourse–and open space for work by graffiti artists.

5Pointz owner, developer Jerry Wolkoff presented the proposal to Community Board 2 earlier this year, saying the development would be an asset to ongoing changes in the Long Island City community.

Community board officials expressed concern over the size and scope of the proposed project, but agreed that a mixed-use development at the site would be a fitting “next chapter” to the history of the iconic 5-Pointz building.

(Although the Gazette erroneously reports that fire escape collapse victim Nicole Gagne died, she in reality, has not.)
Posted by Queens Crapper at 12:09 AM

Glad to hear Nicole Gagne is well, although I wouldn't really use the horrendously incoherent piece linked to as conclusive evidence.

Since there's no market for what they're building in LIC except as rentals, methinks the guy is pulling a Trump and absurdly overstating what he wants to build so a "compromise" can be worked out and he'll get what he was shooting for anyway.

Hard to see the market for 88 floors of housing within 5-80 feet of an elevated train and 24/7 railyards. But I've been fooled before in LIC, admittedly: imbeciles keep coming. How long before they complain about the railyards' noise disturbing their quality of life?

Jerry Wolkoff & Sons...
the family of commercial slum lord fame...
is certainly putting in a lot of overtime puffing up those "big development" plans for 5 Pointz in the press.

When or, more likely, if it ever happens according to plan...it will happen.

But it's NOT likely in this economy...
not for quite a few years.

He's just engaging in a war of nerves and self delusion.

Jerry really just wants a set of approved plans okayed by the city in place...so that the value of this contaminated property is worth more to borrow money against.

Or maybe he intends on flipping the property to wriggle out of his troubles with it.

His fortunes must have been dropping due to the fines he's been paying out on just the 5 Pointz site alone.

Perhaps the fall victim, Nicole, is also suing him.

THAT he deserves for keeping the building in such a shameful dangerous condition.

But isn't that what a slumlord generally does?

25 years too late.
The damage to NYC has already been done.
$800 million in round the click graffiti cleanup of our communities ....

I hope you're reading all of this Jerry, David and Adam Wolkoff...as you sip your morning coffee in your posh Park Avenue digs.

The community is wise to you...
even if the local community board
is bought and paid for by developers.

PS:
It will cost a FORTUNE to demolish this building,
with all of its toxic issues, this close to the #7 train.

Does anyone wish to
hazard a guess as to the actual figure?

H-m-m-m...
let's see now...there's lead pain... underground PCB's from this former Neptune Water Meter Company's building...so on and so forth.

If anyone opens up that manhole in the floor of the back building to have a look-see...there might be an environmental catastrophe lurking.

That could result in an immediate shut down by the FDNY's Haz-Mat unit!

Hope you've finished your orange juice...uh...Jerry,
my man...without choking on it.

In this depressed market...even the prime waterfront buildings of Queens West have not fulfilled their sales quotas for condo units.

Many are now being offered as rentals.

Yet, even in the overpriced rental market
vacancies abound.

Jerry Wolkoff needs money desperately to build his city in the middle of nowhere...on the grounds of the former Pilgrim State Mental Hospital.

Isn't that way way out in Suffolk County
where the real estate market is is in free-fall?

This aged, greedy, pompous, landlord had better worry about the real estate he's about to occupy in his after life.

Adam and David might have to actually work for a living if daddy Jerry can't provide them a good legacy by flipping 5 Pointz to another owner.

Didn't Jerry get his start by using money from his wife's Las Vegas interests to buy up depressed commercial real estate about 40 years ago?

You see, we might know a lot about
the Wolkoff family fortune than you think.

The Gazette?
LOL!
What does this f-----g news rag know
about diddly squat?

Even the crummy Courier
beats its news gathering accuracy.

I guess that the Wolkoffs will now be blaming
the 5 Pointz people for posting all this negative stuff
about him and his.

Wake up Jerry!
There's some old Phun Phactory dudes
that might be exposing the truth here.

Generally speaking...
when a mega-project like this is really underway...
there's no need to bullshit about it in the media.

Another example of manure spreading:

In far away Flushing another "really big" project was proposed by the TDC Group for the municipal parking lot #1.
On that site, "Flushing Commons" was supposed to rise...with a shovel in the ground as of last September.

Not a single surveyor's mark on the ground
can be seen yet. Shoveling shit was in full swing, though.

TDC put on quite a dog and pony show for Community board #7 just like Jerry has done in LIC.

Wolkoff doesn't have enough money on his own to erect his towers of babble!

Could he be looking for a partner or two to dupe into his boondoggle?

25 years too late?
You are right.
Your brain has been too far damaged,
you ignorant hater!

Like Vallone on the East River, everyone is scrambling to get started cause they know the shit is going to hit the fan in a few months.

Wolkoff doesn't have enough money (on his own)
to build his bullshit 5 Pointz project.

Just run a D & B on him.
He's fallen down financially over the years.
And he's getting on in years too.
He must be pushing 80 by now.

This ain't exactly on the East River...
which is prime property.
5 Pointz is a toxic site....an environmental time bomb!
Its remediation will cost multi millions alone.

LOL!
So what's the story Jerry?

H-m-m-m....
another mega developer in his own mind...a tiny cock with a huge ego...and failing fortunes.