Well, those historic millstones are now installed in a new park at Queens Plaza. You may not have heard, but that's not a surprise. The photo below shows the placement of the millstones. 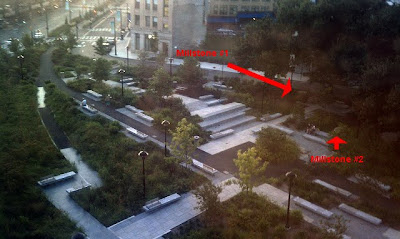 Of course, a hoped-for restoration of the artifacts didn't happen. If these were in Manhattan, millions of dollars would have been spent on study, care, restoration and celebration with grants being provided to museums and cultural institutions for said purposes. Since they are on the other side of the Queensboro Bridge, they were tossed without much thought into a library that most people don't even know exists, and now they are on top of concrete and metal pedestals left open to vandalism and getting crashed into by cars. When DSNY decides to clear the streets during the next snowstorm by dumping the snow in this plaza, I shudder to think what will become of the millstones. One of them is definitely subject to rock salt, being buried in a mound of snow, and rammed into by plows in its current location next to the road. 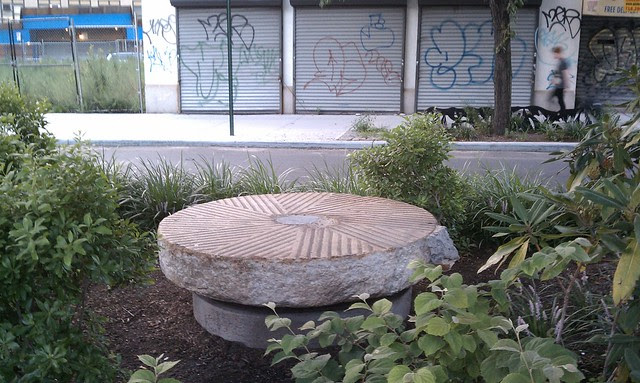 The stone above has a chunk of concrete hanging off the right side of it. 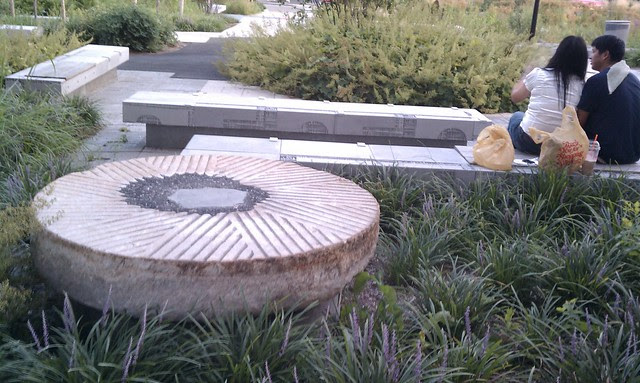 The other one has asphalt spackled into the middle of it.

[The Newtown Pentacle's photos show the decay in much more detail than mine do.] 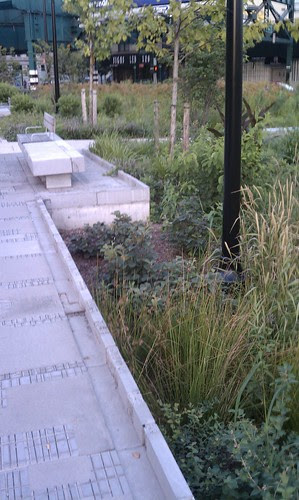 Can't wait for the inevitable lawsuits that will result from people tripping off the path into the plant bed about 2 feet below. 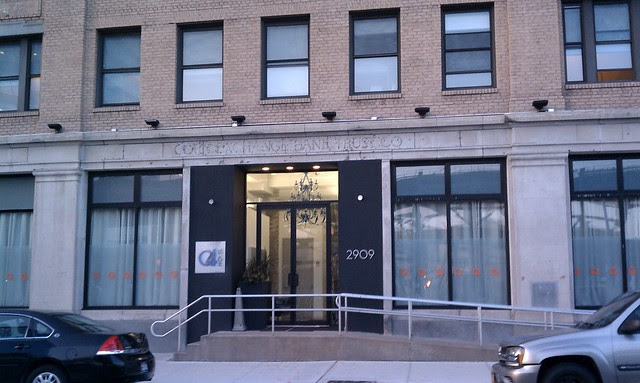 Across the street, a clue to this building's history appears. The missing letters said "Corn Exchange Bank Trust Co."

Amidst all this urban grit that's supposed to be "cool", there is nothing that explains what the millstones are, or their role in the area's history. One of the park supporters' biggest criticisms of the once-sidewalk-embedded millstones were that "thousands of people walked by the millstones every day without knowing what they were." Nothing has changed.

"...hopefully, the site will include a sign or a stone explaining their history." - Gerald Walsh, President, Dutch Kills Civic Association, 2010

Fat chance, pal. As the previously linked-to Pentacle article from April 2012 states: "The Long Island City Millstones are back as well, although due to a lack of signage indicating their historical meaning or context, they appear to be just another accoutrement."

As an aside, if you like broken concrete that collects trash, plants that look like weeds (which are supposed to represent a faux wetland but were more likely selected to mask the unplanted weeds that will spring up) and bikers straying from their dedicated lanes and speeding at you in the middle of a cacophony, then this place is great. If not, then this was a total waste of $59M of taxpayer money.
Posted by Queens Crapper at 12:43 AM

That must be the shittiest designed nature trail I ever seen.
Why all that nasty ugly commercial grade gray concrete.
I smell kickbacks and mobbed up contractors.

wait till the skateboarders find this daredevil paradise ?

they love jumping the walls and concrete....

Absolutely correct. If they were in Manhattan there would have been several articles in the NY Times and careful restoration and placement by now. But, hey, it's only Queens.

But above all, thank the people of Queens who passively watched.

There was certainly enough press about this - the right people in Albany and City Hall knew what was going on and signed off on this.

Today's (Saturday) program at the influential Greater Astoria Historical Society will be on the topic of what it was like to live in 1962. A slide show of fashions and car styling.

I won't stand for this. I'll be on this case immediately. Thanks, Crapper for keeping me informed about what's transpiring in our beloved borough. This is an outrage! Truly an outrage!!

That's 'cause you sit on you big, fat ass all day long doing what your told to do by your master, Herr Bloomturd.

Mayor Bloomberg, and his administration,
have been draped around our necks like a pair of weighty millstones for too damn long!

We won't be seeing any real relief
until his usurped 3rd term is finally over.

I'm counting the days and will be toasting his exit
with a flute full of fine vintage bubbly.

I think we are all sick of his skinny arrogant ass!

As a driver...what were these people thinking????

you used to get into the local lanes by bearing right off the sunnyside bridge, now you have to make a right onto northern then a left and whats with the 3 lanes? geez 18 wheelers drive under the trains.....

wait for the $10 million dollar redo

Plus there are cops making plenty of OT

A failure all over!

You do NOT want a sign explaining these items at Queens Plaza - it will only attract someone with unpleasant designs.

Just thank the local community's feeble efforts to try to save these – it’s that publicity that probably explains why they are still in here and not spirited away to eastern Queens or some other location.

Because of groups like them, the days in which Greater Long Island City is viewed as an historic site to be demolished or looted are rapidly drawing to a close.

In the meantime, everyone’s words now ring hollow. Frankly George (with all due respect), you, like other groups, had an opportunity to ensure that this did not happen. You are right – if this would be another borough – Brooklyn, Manhattan, just about anywhere else – the story would be different.

But instead, when ice cream money was dangled before us, everyone decided to work at cross purposes with each other. So the smirking party hacks once again carried the day.

But take comfort for there is some good news. Act II is about to begin.

Now get out of the way and let the pros take the stage.

Mayor Bloomberg, and his administration,
have been draped around our necks like a pair of weighty millstones for too damn long!

We won't be seeing any real relief
until his usurped 3rd term is finally over.

I'm counting the days and will be toasting his exit
with a flute full of fine vintage bubbly.

I think we are all sick of his skinny arrogant ass!
---

So we all go about kissing the ass of our councilman who overturned term limits and put him there.

But take comfort for there is some good news. Act II is about to begin.

Now get out of the way and let the pros take the stage.

I hope you don't mean Christine Quinn. Or are you referring to a new Borough Pres? The problem is that they're all pros - professional politicians who like to glorify themselves and slurp at the trough of public money.