Pedestrians getting hit in pedestrian lanes 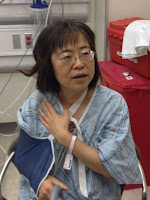 A speeding bicyclist slammed into a woman on the Queensboro Bridge — knocking her out cold and fracturing her skull, the Daily News has learned.

Lingbo Shen, 52, said she was walking toward her Queens home in a pedestrian lane of the span when the cyclist crashed into her about 8:30 p.m. Thursday.

“Somebody hit me from the back,” she told The News. “I fell. I was unconscious for nearly four hours.”

Shen — a research analyst at Memorial Sloan-Kettering Cancer Center in Manhattan — awoke just before midnight and found herself in the emergency room at New York Hospital.

She was being treated for a cracked skull, broken collar bone and three fractured ribs. A hematoma was causing her to bleed from her ears.

The crash comes a week after a Daily News investigation on speeding and inattentive bicyclists in Central Park. It took reporters just 35 minutes to find 16 bikers riding over the 25-mph speed limit.

On Monday, a blind man walking in a pedestrian lane was struck by leadfooted cyclist Omar Shakir, 30, just above E. 90th St. in the park.

Richard Bernstein, 38 — who is in the city training for his eighth marathon — went to Mount Sinai Medical Center with a fractured pelvis and hip. He also lost some teeth.

Bikes are vehicles. They should not be allowed to mix with pedestrians. Period. Expect more of these types of accidents when the City's bike share program starts in March.

(And thank you, Daily News, for leaving Ed Koch out of this.)
Posted by Queens Crapper at 12:11 AM

The Queensboro Bridge is a mess and has contradictory markings. At the entrance to the bike/ped path on the Queens side there's markings in the road which clearly indicate that Manhattan bound bikers and pedestrians should stay to their right, and those coming into Queens should stay to their left. You can see that at the very beginning of this video. For the most part, that's what people seem to do - which makes sense since in this country we're taught from an early age to stay to the right in traffic. But, in the middle of the span the mostly faded markings seem to indicate that pedestrians in both directions should be in the outer lane and bikers in both directions should be in the inner lane. Pedestrians, of course, could get by with this just fine but it would be incredibly dangerous to bikers since that lane - neither lane, really - in not nearly wide enough for two way traffic.

No, pedestrians and bikes shouldn't mix, which is why this design, which forces them to, doesn't make sense. Either get bikers and pedestrians onto opposite sides of the bridge, like they do on the Manhattan Bridge and on part of the Williamsburg Bridge, or at least significantly widen the bike lane so it can safely handle two way traffic and physically seperate it from the pedestrian path with lane delineators. I hope Crappy will call loudly for these improvements.

How about the bikes ride with the cars like they are supposed to?

Ok, QB needs to be reconfigured. And the excuse for knocking into pedestrians in pedestrian lanes in Central Park is?

"Bikes are vehicles. They should not be allowed to mix with pedestrians. Period."

You should see the mess of a bike path on the Cross Island Parkway in Bayside.
Nobody can read the green lines painted on the asphalt separating bikes and pedestrians or they just don't give a crap. A real mess !

Yep...
another speeding biker on speed!

Yeah - bikes are dangerous and I find tourists riding them on sidewalks around Columbus Circle. I almost got hit while waiting at the crosswalk for a light to turn green - the person couldn't control the bike. Even at slow speeds as this happened to be, you can be knocked down and fall on your head. ENFORCEMENT is a basic of RULE OF LAW - which there is none anymore. The right to bear arms is indeed a powerful right in this country!


On the two feet of the Queensborough Bridge there's a sign stating that bicyclists should dismount and walk their bike. Theys shouldn;t be allowed at all, they should take the train along with their bikes. They are a danger to pedestrians.

To the commenter who thinks it's the most important thing in the world the mention that cars cause more injuries and fatalities than bikes...yes, for the 1000th time, we know. This post is about pedestrians mixing with bicycles on a path where there are no cars and the resulting collisions. I have covered the Queensboro Bridge car accidents where cars hit pedestrians. I covered the accidents that happened on Woodhaven Blvd and Queens Blvd involving pedestrians. I am not here to cover every car accident in the city so you have a venue to comment about how cars suck. You have Streetsblog for that.

This post is about the Central Park roads and the Queensboro Bridge paths. There are no cars there. Therefore, discussing cars is irrelevant and only serves to distract from the issue at hand. People need to stick to the topic instead of going off on a tangent. I'm glad you've cut down on allowing the nonsense comments on here and I have found that you generally allow comments that disagree with your perspective when the comments are about the topic at hand. Why is it so hard for people to discuss the collisions between bikes and people in Central Park and on the bridges without resorting to "but cars do more damage!" when cars are not a factor in either debacle?

Did it ever occur to anyone that just because that woman says she was in the pedestrian lane doesn't mean she didn't veer out of it into the cyclists path?

Anyone who walks or drives in Flushing knows that it's very possible.

There is no evidence that the cyclist was "speeding".
The use of the word by the News is simply poor reporting.
You don't have to be speeding to injure an older person.

It's not a question of speeding: on downhills a cyclist will never reduce speed in order to avoid colliding with a pedestrian. They will never stop to assist a person they have injured.

At a traffic light, where a cyclist can go thru a red without being hit by a car, they will blow a whistle or shout "Get out of my way" to pedestrians crossing with the light.

3 or 4 cyclists laugh at people jumping out of their way as they weave thru a crowded sidewalk.

This is so wrong - no one should hit anyone, with or without a vehicle... at the same time, keep the pedestrians out of the bike paths!

Bloomberg thinks this is China
where everybody rides bikes.

These bike lanes are little more than a multi million dollar boondoggle when NYC has many more serious concerns to deal with.

REMOVE THEM!
REMOVE BLOOMBERG TOO!

Bikes, motor vehicles and autos are the same - vehicles and means of transportation and should not be used near a pedestrian or should be slowed down near a pedestrian. It is always the driver's duty to be mindful of the vicinity. By the way, were the bikers charged? She should seek an accident lawyer immediately.

I got hit by a car by the Queensboro a few nights ago. I was standing on the sidewalk. Thankfully, I was biking and had a helmet on. If I didn't, I may not be here today. Bloomberg needs to stop worrying about putting up traffic lights for bikers and put up barriers.