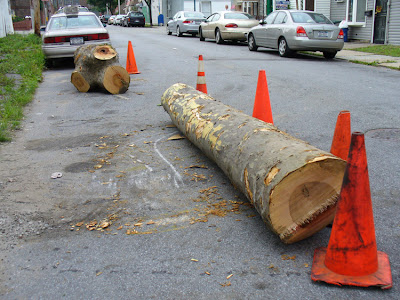 There were trees cut down at St. Saviour's yesterday (57-40 58th Street in Maspeth), with the rest expected to be chainsawed throughout the rest of this week. The remains above are of the tree behind the tennis players in this photo. 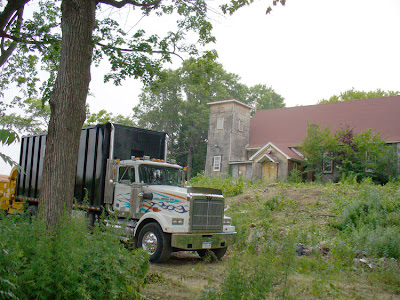 The developer's representation is of course through Parkside Group, with the heavy influence of Pinky, who directed that the trees be cut down to spite the people who held a rally to save the property on July 1. 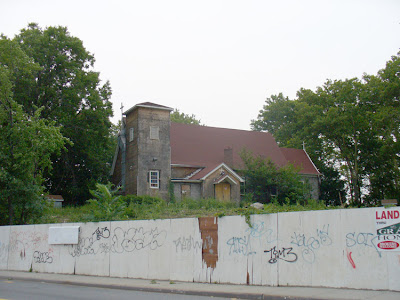 Guess what? It appears that both the esteemed councilman and the lobbying firm are accessory to a federal crime. You see, interfering with the nesting of migrating birds is against the law, and just about every tree on that property contains the nest of a songbird.

And here's the kicker:

The Parkside Group announced it hired [William] Brennan as a president, adding him to its small but well-connected roster. Brennan was a commissioner for the Community Assistance Unit. Brennan also ran political and field operations for Bloomberg’s re-election campaign in 2005.

Mr. Brennan was asked to intervene on the St. Saviour's matter when he was the Commissioner of the Community Assistance Unit. He totally blew off a group of preservationists, and was nasty about it, too. Now we know why.

Mr. Bloomberg, the "Great Environmentalist", the destruction of this property came on your watch. You have already failed in your plan to "green" the city by turning your back on this neighborhood. This beautiful plot of land will likely become a gray concrete wasteland unless you do something immediately. Otherwise, it is an issue that will follow you during your quest to become president. That's not a threat, it's a promise. Why do you send trees to Israel to be planted yet allow an Israeli development company to come here and make Queens look like the Gaza Strip?
Posted by Queens Crapper at 12:24 AM

Bloomberg, how could you allow the destruction of this part of Queens history? Have you no soul?

William Brennan is a no talent moron. In the short time he led CAU he turned it into a dumping ground for misfits.

Thank God Brennan is out of CAU. Maybe Bloomberg will hire a real leader not an asshole like Brennan.

This is really disgusting! The only way to halt the destruction of this great city is to remove those in power who have allowed it. Anything else is an exercise in futility.

It's good to see that Mr. Brennan found a job that's more suitable to his personality - screwing communities instead of helping them.

I hope (G-d forgive me) that Pinky walks around with a price on his head throughout all eternity for this !

According to some Eastern religious traditions, if you rack up a negative debt of Kharma, in your lifetime, you have to keep returning to Earth after each successive death cycle (usually as a lower life form i.e. a worm etc.) and have to start slowly working your way back up the evolutionary ladder until you finally get it right (i.e. achieve Nirvana) !

The Parkside Group must be stopped. Their heavy handed tactics are destroying this city. There is no guarantee that this developer will get their zoning change and will be able to build anything on the property. This was done purely to try to dampen the spirits of the people who are trying to save the place. Guess what Evan, Bill, Harry, Pinky? IT'S NOT GOING TO WORK. Now stop breaking the law and come to the table with the groups that are trying to save the church.

It's time for a lengthy investigation of the Parkside Group. Their tactics are despicable and they get away with it.

Somebody ought to save a couple of those tree limbs to , perhaps, use on the perps who are responsible for this spiteful evil crime !

"Vlad The Impaler" (of medieval Transylvania) had the right idea for the proper punishment in this case!

(Relax.....this is purely an exercise in fantasy.....I'm really just a peaceful soul and disapprove of the use of violence) !

Still don't understand how sitting commissioners like Giannoulis are allowed to be lobbyists.

This is great. As we start our investigation on ways to overturn the landmarks law, lets make sure that Bloomberg is blamed for this.

Now when he runs for president, lets seek how well his campaign is going (along with donations) from all those communities that lost landmark protection.

If Brooklyn has been called "Crooklyn"..... then New York ought to be known as "Crew York" because that crooked-old-boys-club crew that runs this city are all up each others' asses..... looking out for their own interests..... not yours and mine!!!

Why have any doubts that Commissar Bloomberg (along with his "sexual assault" partner in crime) directed this tree-cutting for a payoff?

He appointed weaklings and associates himself with every rotten scumbag known. He's entirely and legally responsible for every action of every municipal employee, no matter where the employee appears in the chain of command.

We already know you had the trees destroyed! What else?

You have to try REALLY hard to be this insane. Thanks for making the effort.

EXCELLENT POINT QC: "Mr. Bloomberg, the "Great Environmentalist", the destruction of this property came on your watch. You have already failed in your plan to "green" the city by turning your back on this neighborhood. This beautiful plot of land will likely become a gray concrete wasteland unless you do something immediately. Otherwise, it is an issue that will follow you during your quest to become president. That's not a threat, it's a promise. Why do you send trees to Israel to be planted yet allow an Israeli development company to come here and make Queens look like the Gaza Strip?"

Because Israel is Jewish, like me, and Maspeth isn't.