Huang caught in the act again 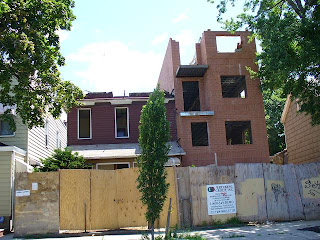 This will come as no surprise, but Tommy Huang was apparently caught again doing illegal demolition work. His illegally constructed house on Mazeau Street in Maspeth violates the zoning code, but instead of tearing it down, he decided to demolish the house it is leaning up against. Unfortunately for Mr. Huang, the right person was there at the right time, saw the work being done improperly and unsafely, and called the NYC Sheriffs and DOB. When they arrived, they didn't issue any violations for the work, but rather for the fence. Another stop work order is now in place. 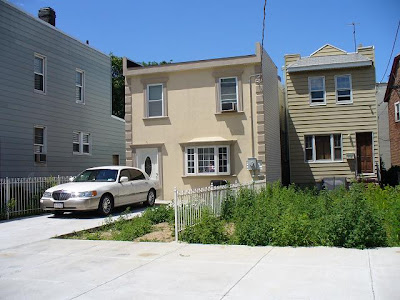 Across the street, at 57-40 Mazeau Street, a garage was transformed into a house without any permits... 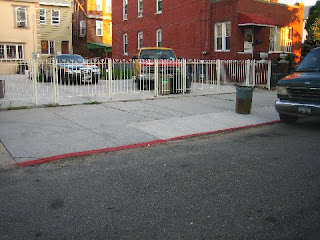 ...with a new red-painted curb cut in front.
Posted by Queens Crapper at 12:00 AM

Is it a surprise? He'll never stop.

Who runs DOB? Who appointed that person?

What connection is there between Huang and Bloomberg?

Classic Crap. That stucco will start to fall off in a few years.

The car in the front yard is a nice touch, too.

Huang is a scourge. He is like one of those villians in the horror movies, no matter what you do, you can't seem to get rid of him.

exercise in futility i know but... it might be worthwhile sending a packet-- photos & notes-- to DOB, Bloomberg etc, maybe even a couple of the press people who aren't already owned.

the whole thing is outrageous but it's curb cuts that make me furious in that immediate, arrrrggggh kind of way.

You have to wonder if parking a car in front of the only means of egress is legally ok besides being unwise.

I know it's not much, but a call to 311 about a painted curb(which is illegal), at least gets them a nice fine, and they have to scrub off the paint somehow :)

We've been there and done that....and much, much more!

It does seem futile at times..... and yet.... it's that determined Bulldog who fastens himself securely onto the Bull's nose and hangs on tightly that is able to win out in the end! NEVER LET GO !

The Flushing community has been dealing with Huang and now his offspring for a 1/4 of a century in downtown Flushing...it began with his illegal demolition of part of the historic landmarked RKO Keith's theater etc.

Tommy Huang was eventually convicted and finally driven out of our neighborhood ! Unfortunately this Locust plague has settled down elsewhere in other Queens' neighborhoods !

It is the job of every neighborhood to make these low-life scourges unwelcome anywhere !

Nothing less than this kind of commitment will
stop a (still politically connected) persistent bastard like this !!!

"It is the job of every neighborhood to make these low-life scourges unwelcome anywhere !"

Its time we hold all of our politicians accountable for this guy. Rockaways, Douglaston, Woodhaven, Glendale, Sunnyside, whenever something on preservation comes up, ask questions about Huang, ask questions abut Huang, etc. Throw his name, like shit, everywhere.

Any guess that any city wide preservation group will hold a conference on plagues like him?

Guys like this are not in Manhattan so its not a problem.