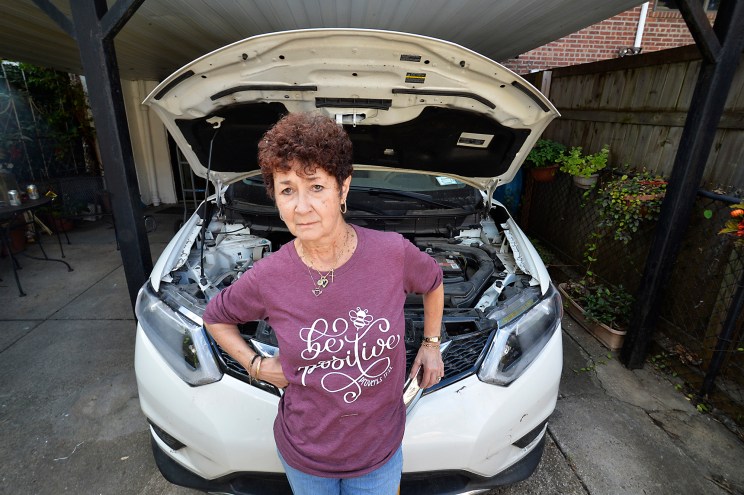 A Hurricane Ida flooding victim that Mayor Bill de Blasio wrapped his arms around in an emotional scene last month called out Hizzoner on the radio Friday, saying the feds failed to deliver the aid he promised.

“You hugged me and told me that FEMA would take care of everything,” Woodside resident Julia Nieves told de Blasio during his weekly appearance on WNYC’s ‘Brian Lehrer Show’. “Unfortunately, FEMA didn’t give the [$36,000] to anyone in our Woodside homes.”

The $36,000 referenced by Nieves is the maximum award available for homeowners through the U.S. government’s disaster relief program — but locals, including Nieves, say they’ve received just a fraction of that amount.

“I can’t replace the water heater, a boiler, replace all the walls,” she added. “You were in my basement and saw what happened to my walls! They had to remove everything because of the mildew and the smell was horrific.”

Instead, the retiree said on the radio program that she’s been forced to refinance her home to come up with the $11,000 for her new water heater and boiler — and she still needs to buy a new refrigerator, washer and dryer.

“How does this work for everyone in the community of Woodside, Queens who [was] flooded by Ida,” she concluded plaintively — leaving de Blasio on the defensive and promising the city would intervene.

She should also go after Senate Majority Leader Chuck Schumer to find out why FEMA is dragging their feet.

Here's the majority leader emphasizing that homeowners will be grants and all damages will be paid for.

If only these residents can sue the city for infrastructure negligence pic.twitter.com/WdaNLMFo89

Has anybody heard about Joe Bidens Federal property tax?
That's right Sheeple !
Someone I know read a memo from a Congressmen stating in inside the Biden budget it's empowing the IRS to bring online a Federal property tax of 8 percent on all homes, rental properties and business's on top of the local property taxes. This is going to force alot of companies out of business and force bancruptcies and foreclosures on homes and rentals. Now with everything becoming more expensive it's going to get
bad.

Rain is beautiful, it flushed out all the illegal apartments.

NYC Politicians will be sure to get a big cut out of whatever money is going around.
Goodbye America, hello Venezuela. Brandon's a nightmare on Elm street.

Call the Climate Police next time !

Democrats kind of remind me of my kids, when they were little. They’d get into my purse & take my extra-large pack of gum & hand it out to all of their friends, who were elated to receive their gift!! I loved their generosity, but I was a little concerned about whose expense it was being done at !

Tax payers are paying too much for these Libturd social bail out programs !
Free childcare, free 2 yr community college and other things sound so good, until you realize everyone including yourself will be paying for all this.
We get Christmas cancelled, but the democrats still want to force us to buy them everything on their wish list!

Why do we give more help to illegals then we do veterans?

Pointing out every lie a democrat says on camera is like counting stars in the sky.
Prove me wrong ...

Dig a dry well, install some pumps with back up power problem solved sheeple !

@"Has anybody heard about Joe Bidens Federal property tax?"

Yes, it made front page of the National Enquirer.

@"Pointing out every lie a democrat says on camera is like counting stars in the sky.
Prove me wrong ..."

Says someone who has been lying day in day out on this site.
Prove me wrong ...

I see that dishonesty runs in your family then.

@"Tax payers are paying too much for these Libturd social bail out programs !"

You forgot to include free car storage on our streets.

If voting mattered it would be illegal...

Has anybody heard about Joe Bidens Federal property tax?

Better yet, has anybody heard about the GLOBAL TAX Brandon signed with other globalists?

Never ever trust a politician (Especially a democrat) They will always break your heart...

Seems like a good way to bring jobs back to America.
You being a commie would probably have issues with that.

@“ Never ever trust a politician (Especially a democrat)”

But we can trust you?

Did she REALLY think those turds cared?
Bahahahahahaha.......

They're politicians-and Commiecrat ones on top of that. All they care about are photo ops.

@You forgot to include free car storage on our streets. @

You are really pathetic trying to push Agenda 21 crap here.
Our bike lanes is more accurate, since the price is added to sales tax also.

Good to see communist activism on display, sponsored by the capitalists.

Bicycles and pedestrian traffic as an alternative form of transportation to the automobile.
Bikes. What does that have to do with it? I like to ride my bike and so do you. So what? Bicycle advocacy groups are very powerful now. Advocacy. A fancy word for lobbying, influencing, and maybe strong-arming the public and politicians. What's the connection with bike groups? National groups such as Complete Streets, Thunderhead Alliance, and others, have training programs teaching their members how to pressure for redevelopment, and training candidates for office. It's not just about bike lanes, it's about remaking cities and rural areas to the 'sustainable model'. High density urban development without parking for cars is the goal. This means that whole towns need to be demolished and rebuilt in the image of sustainable development. Bike groups are being used as the 'shock troops' for this plan.

Good morning. Another beautiful day in Queens. Hope everyone is doing well and enjoying life. Proud and blessed to be an American!

What’s up with the Brandon chatter? Oh yeah, it’s FU. Thanks.

Her and other peoples relief money from Bidon & FEMA was severally skimmed for teachers and department of education coffers.
She will never see that money unless she alters her house and takes in a section 8 tenant of color or refugee status.
Keep voting democrat socialist stupid New York voters, you get what you asked for with deBlasio, Alexa Cortez, Adams and all the rest the commie socialists

What’s up with the Brandon chatter? Oh yeah, it’s FU. Thanks.

@" Bike groups are being used as the 'shock troops' for this plan."

Ignazio Silone said...
"The Fascism of tomorrow will never say 'I am Fascism. ' It will say: 'I am anti-Fascism." Prove him wrong...

Commie Comrades are on full display here because they know the mid-terms are only 13 months away bringing a giant red wave. Their delusions and derangements over Trump are well documented on this blog. They are welcome to continue and keep displaying it. I’d believe the Trump pee story if you told me it was Bunter Hiden instead. Prove me wrong...

"Anonymous said...
@“ Never ever trust a politician (Especially a democrat)”

But we can trust you?"

More so than the heartbreaker democrats.

Democrats breaking hearts one at a time, but still thinking we're noble among men


Can't deal with the truth?

"Can't deal with the truth?"
Not these little Commie Bastards they follow the script.

“Are you a communist?"
"No I am an anti-fascist"
"For a long time?"
"Since I have understood fascism.”
― Ernest Hemingway, For Whom the Bell Tolls

Of course he's right. He was an early AntiFa too. Good people like him have no time for Trump Turds or other assorted right wing nuts.

Is that what caused you go go nuts?

The Commie Comrades been up to no good in the Bronx all day.
45PCT on notice for a horde of cops.
Word is deBlasio, Alexia Cortez, and Bidon's wife are going to City Island / Hart Island to make some big announcement tomorrow or Friday.
They sure wont be welcome on City Island so it must be Hart Island.

Is that what caused you go go nuts?