This block blocks the NYPD 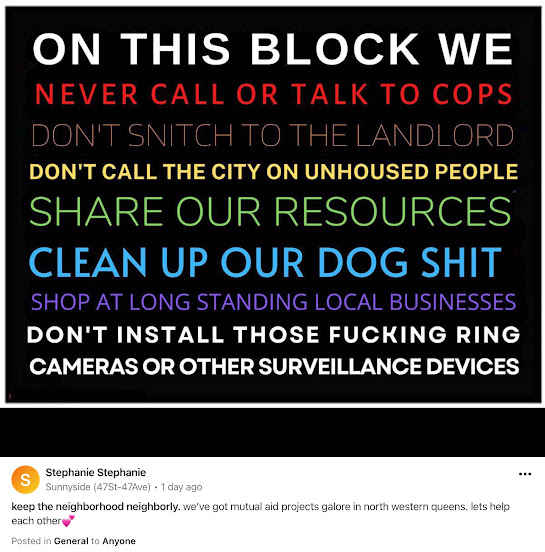 Well, can't really argue about curbing your dog and those invasive facial data collecting ring cameras, but considering that winter is coming, maybe letting unhoused people dwell on the streets is probably not good for them either.

47th Street & 47th Avenue? What? They’ve had the cops called on them before? Sounds like convicted felons running afoul of their probation officers.will be happy to forward this to NYPD.

What's with this "WE" crap?
Let one of the "WE" crowd get attacked or get their home broken into or have the homeless squat on their stoop and see how this pledge is adhered to.

"Nothing will change your political viewpoint more than a transient taking a shit in your front yard." - Los Angeles County Sheriff Alex Villanueva

What a Pollyanna idiot, this woman. Do you think her beloved ghetto thugs and illegals are so civic minded? They must be laughing themselves silly as they plan their next assault on this stupid libtard neighborhood and its imbecile la-la-la singing residents.

Let me tell you; in our small town we also have the infestation of liberal commies who hate the police. One night, a year ago, a woman commie lib was standing on her front porch arguing with a drunken woman tourist who had run over her precious flower bed and she got a face full of fist. So who did she call? That's right, you got it, our highly underappreciated, underpaid, town marshal. They hauled the perp off to jail and that very night a nice, liberal judge, released the violent crazy woman without any punishment. Welcome the new America.

Anyone tries that in my yard they'll be shitting into a colostomy bag forever assuming they survive the double-ought buck...

Former Inmates, Assorted Felons and gangs are taking over the streets, these animals have their own laws, codes of ethics and conduct. Just like down in Columbia, El Salvador, Haiti, Brazil where they teach the 12 year old kids in the family how to scope out, load, shoot and run.

Yes, They absolutely hate the 1080P HD resolution Ring doorbell cameras and IP Cams where anybody can log to the IP address, review the recording or watch.
Stupid dumb sheep "Baa Baa Baa Its not gonna happen" voters forever electing democrat socialists caused this "welcome the illegal vibrant and diverse" and bail reform, defund police, prosecutors office, courts shit.
As the man said YOU AINT SEEN NOTHING YET.
I been through this before as a kid in Bushwick in the 1960s when JFK, Lyndon B. Johnson and Mayor John "come and get it" Lindsay turned a once paradise it into a big toilet in as little as 4 or so years.

If people don't get these bastards out and elect Sliwa the city's going to be a war zone free for all. Every ground floor window needing ugly steel bars and every citizen needing a bulletproof vest and weapon to go out past dark or daylight.
These progressive democrats want the good citizen homeowners behind the steel bars or driven away any way they can.
I'm voting Sliwa, I had enough white homeowner hating socialists. They are all one big hamper of dirty festering diapers that need to be busted up and put out of business, buried.

See how right wing nuts hate when people have a little freedom.
Then they cry Tyranny day in day out.

@“ Yes, They absolutely hate the 1080P HD resolution Ring doorbell cameras and IP Cams where anybody can log to the IP address, review the recording or watch.”

So mass surveillance and facial recognition is a-ok with the right wing now. Is that new policy?

The DemOrAts have let the far Leftoids Metastasize and destroy the party.
It's not getting better, they need to crash and burn the leadership must be voted out.

Might as well ring the dinner bell for muggers, burglars, car thieves and rapists. They are apoarently welcome on this block

Anom Says: So mass surveillance and facial recognition is a-ok with the right wing now. Is that new policy?
---------------------------------------------------------------------
First off it was clear my post is referring to surveillance on private property.
Are front doors & doorbells on streetlights ?
You democrats & libs are always attempting to steer the narrative.
When the government refuses to compel its own laws, places the cops in handcuffs and gives the scumbags special protections and immunity. YES !
When your at war you need every tool available to see the bad guys coming, protect you family, self, property. Paul Revere used lanterns, General George Washington used telescopes, field classes. Our military uses drones and satellites.
SO CUT THE CRAP !!
When you can see them coming you have the upper hand, can be ready to deal with them. Ever since all this BLM, no bail, no police and chaos my Kevlar vest and steel lined shark gloves are always on hand.
These mother fuckers have used needles, guns, knives, lighter fluid and are becoming more brazen by the day.
The last asshole who turned my doorknob went down, around, opened my gate and went down the basement steps and pulled down his pants to take a shit got a hell of a surprise. This was the nice house I sold in Ridgewood.
You need to consider this is a city at war, why do so many refuse to see this until something bad happens to them or a family member?

If you think the cops are gonna be around to save your ass your a dumb sheep or 2: A potential dead sheep.
Your on your own, these are very bad times (perhaps the worst in this city's history) you gotta be aware of your surroundings. Nasty predators, drug addicts and lots of crazy is about.

Seems to me that the "freedom loving" right wingers, really really hate freedoms.

You so called "conservative" types would love China and or Russia. Perfect for your mentality.
See how well Queens Crap goes in the PRC.

@Are front doors & doorbells on streetlights ?

Good one Joe. Do you really want to know what is in the Smart City street lights?

Try 2 high res cameras, BT, WiFi, mics. Pretty cool stuff. The LED-s are the least cool about them.
Cool for the Commies!

Seems to me that the "freedom loving" right wingers, really really hate freedoms.

You so called "conservative" types would love China and or Russia. Perfect for your mentality.
See how well Queens Crap goes in the PRC.

Eh...you boyz are tripping on some unknown stuff?

See how right wing nuts hate when people have a little freedom.


So to understand this correctly, the Communist Nut - that's you - likes the freedom of the "little people", freedom like theft, murder, robbery, violence.
Got ya. You need to see a doctor, seems there are some issues in your head that need to be resolved, even if you are a stupid propagandist.

Eh...you boyz are tripping on some unknown stuff?

This is part of the same anti-vax crowd calling COVID vaccinations bots, and robots for surveillance and mind control of our bodys.
Most know nothing about electronics, its limits, things like laws of physics.

About the smart streetlights.
This city has many but only at key points of interest like tunnels, bridges on highways to monitor traffic. Bad neighborhoods and intersections.
They run on 5G, which has a limited short-range nature requiring "hand off" transceivers at regular intervals in order to keep "hop" signals going.
I'm not to concerned with that at this time where I live now (City Island) because its mostly a white hard working middle class Italian German neighborhood the city doesn't give a shit about because nobody takes section 8 and it has no high school or social services bullshit.
The only 5G cameras are at the Bridge (Bridge Street) and by the grammar school.

Now for some QC educational purpose:
Personally I have 5 HD 1080P cameras that go CAT 5 hardwired into a hub, then a router that assigns my OWN IP address and personal Ghz wireless signal.
An SSD drive on that hub with another IP address records everything. All on a golf cart deep cycle backup battery that can run it for weeks if needed.
I gave all the neighbors access, no 3rd party like "Ring" controls or clouds my shit.
The reason for this is due to the fish restaurants at the ends of the Island.
The Island is perhaps the best place to live in all New York except the end of the month when the Innner City Bronx welfare $$ is in. Then OH BOY!!
Every end of the month Saturday night, Sunday daytime the Island gets invaded by boozed up carloads of inner city shit coming here to eat greasy fish (only lunatics looking for heart disease would consume) with the welfare payments.
These nasty people buy loads of this fried garbage in styrofoam shells pull over into the driveway cuts to eat (no self control to wait till get home)
They toss the beer cans, sauces, scraps, shells, crab legs, corn cobs right out the car windows, piss in your driveway. Often leading to fights with the homeowners.
Nasty filthy drunken scumbag low lifes acting like this (teaching)in front their own kids. That as kind as I can word it because that's what they are at minimum. That's eyewitness FACT from boots on the ground, not racist !!.

Do you know what this inner city shit says in defense of this behavior?
A: You rich white crackers can afford to clean it up, as blacks we can now do whatever we want now as reparations "I know my rights wha chews gots to say now"
Well LOL, That's usually when some old Vietnam vet, off duty fireman, Italian corner man picks up a shovel and you can guess what one of two things happens next.

@"So to understand this correctly, the Communist Nut - that's you"

Sorry you clown of little comprehension ability. For one blog post you cry because some decent people aren't full time Karens like yourself and Joe and don't want to bother the boys in blue from their phone watching routine.
On an other post you will vilify someone as a "little Hitler" for being a Karen like yourselves and calling the cops on a bunch of protestors.
As for Joe The Karen, he should spend more time reading up on "Ring Doorbell" and who or what it is recording. He may as well have Jeff Bezos in his living room sharing tales of past life fiction.