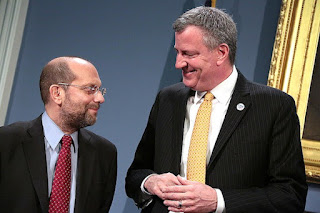 More than $4 billion has flowed from City Hall to scandal-tarred shelter operators over the last eight years, accounting for more than a quarter of the money spent by the Big Apple to tackle its homelessness crisis, an examination of city records reveals.

The money has gone out to more than half a dozen shelter operators — including the embattled CORE Services Group — which have each been accused of issues ranging from failing to deliver on multi-million dollar contracts to executive profiteering.

Recent newspaper exposés revealed, for instance, that CORE’s CEO Jack Brown established for-profit vendors that paid him handsomely thanks to millions in taxpayer funds from CORE, which also employed several of his friends and relatives.

“The idea that public dollars are going to fund lavish lifestyles of nonprofit executives and their families, instead of helping the neediest, should outrage every New Yorker,” said an outraged Councilman Stephen Levin (D-Brooklyn), who chairs the Council committee who oversees the DHS, when told of The Post’s findings.

“That money should be going to get families and children out of shelters and into apartments,” he added. “A child should not be spending a year and a half of their life living in a hotel room.”

For years, homeless activists and social service providers have argued that City Hall underfunded contracts to operate the Big Apple’s shelter system — and, compounding the problem, often failed to pay them on schedule.

That meant well-established organizations often refused to bid on the work, opening the door to less reputable providers.

“The amount of money identified and the amount of scandal suggests there are major, major problems with these contracts,” said John Kaehny, the head of government watchdog group Reinvent Albany, who called on the feds to get involved.

“Only federal investigators have the money and the resources to get to the bottom of this massive systemic failure,” he added.

Stephen Levin is outraged about all this, yet he was the one who was appointed to make sure that these "non"-profit provider executives would be grossly profiting off the homeless crisis which has exacerbated under his watch in the last 8 years. The Blaz couldn't find a better sycophantic feckless enabler.

Dollah dollah dollah! Into the pockets of the black-stablishment! What do you call this criminal grifting by largely peoples of color? Oh yeah, we call it "white privilege."

Deblasio's wife, Sir Laine, is making sure the homies be takin' good care of.

So how come our streets are filled with mentally ill homeless attacking people at will?
Bah! Bullshit!

Anonymous Anonymous says:
"how come our streets are filled with mentally ill homeless attacking people at will"

Answer: The Mayor & City Council cant legally order the cops to run people they don't like outta of town so these communists are having the criminals, mentally ill, homeless do it.
Its called a paramilitary operation.
Destroy everything so socialism can come in and mop up cheap.
Hitler and 19th century Soviet Union used the same
tactics including turning citizens against each other. (yep we have that too, its called division by calling anybody who disagrees a racist)
This is all pure madness MADNESS, prey stupid voters wake up and Sliwa gets in !!!

@“
This is all pure madness MADNESS, prey stupid voters wake up and Sliwa gets in !!!”

Silwas first priority is to defund Bronx zoo.
After that, we all got to wear silky red hats .

Stephen Levin wants to abolish zoning. The only group of people he spares from his affliction are the hasidic jews.

Sliwa' - s you illiterate.
Afraid of losing your home?

After that, we all got to wear silky red hats .

Will match the rest of your outfit.