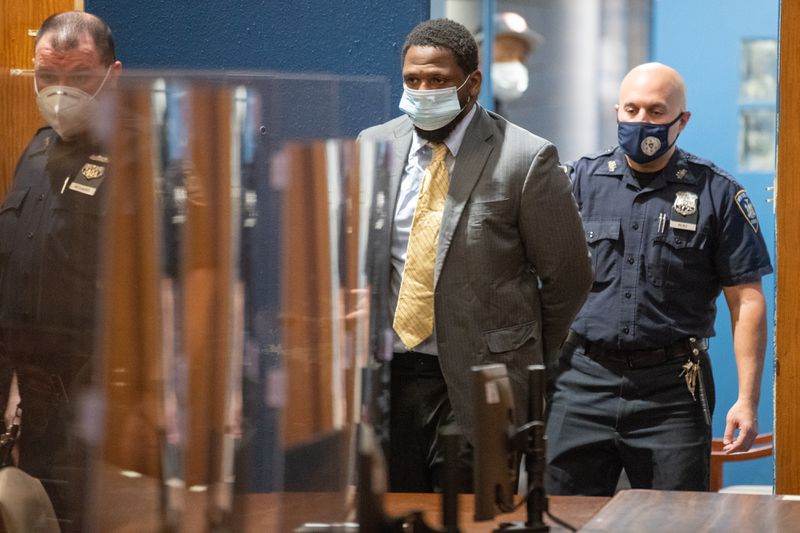 The man who sparked a friendly-fire NYPD shooting that killed a Queens detective pleaded guilty to manslaughter Wednesday as part of a deal with prosecutors that will likely put him away for 33 years.

He’s expected to serve 33 years in prison when he is sentenced next month: 20 for aggravated manslaughter and 13 for robbery, prosecutors said.

The expected sentence is part of a plea arrangement between Queens prosecutors and Ransom’s attorneys at the Legal Aid Society.

“The defendant set in motion a terrible chain of events that began with a robbery and ended in a spray of bullets when Ransom pointed what appeared to be a deadly firearm toward police officers,” Queens District Attorney Melinda Katz said in a statement. “(He) was repeatedly told to lower his weapon, but did not do so. The heartbreaking result was the loss of Detective Simonsen’s life and Sergeant Matthew Gorman being shot in the leg.”

Katz said she hopes the conviction brings Simonsen’s family “a measure of closure.”

Simonsen’s widow Leanne was in the courtroom for the plea. She did not speak to reporters.

“The acts of Christopher Ransom caused the death of Detective Brian Simonsen,” Paul DiGiacomo, the president of the Detectives Endowment Association said outside court. “We lost a dedicated, hero detective. It’s something we all will have to live with for the rest of our lives.”

Ransom and his accomplice, Jagger Freeman, 27, were allegedly holding up a T-Mobile store on 120th St. near Atlantic Ave. in Richmond Hill with a fake gun when cops investigating a spree of cell phone store robberies surrounded the location.

Was he wearing that rumpled dark grey suit when robbing the store?

Why Are Liberal Cities Such a Mess ?
They are afflicted by the problems of homelessness, violent crime, gangs, and unemployment.
When Democrats are in control, cities tend to go soft on crime, reward cronies with public funds, establish hostile business environments, heavily tax the most productive citizens and set up fat pensions for their union friends. Simply put, theirs is a Blue State blueprint for disaster.

Plenty more of this shite coming your way Sheeple.
NYC has long since abandoned the highly successful stop-and-frisk practices of the Giuliani years that led to low street crime.

Everyday, the deBozio Admin keeps fumbling the ball every time it’s passed to them. They are so confused what’s going on and just continue to fail. Let’s Go Brandon!

Don't do the crime if you can't do the time. Nice to see we actually still lock people up!

That's all? Here in my red state, a lifetime felon received 36 years for beating a woman with a crowbar. One of the jurors told me that they wanted 96 years. So who's bragging NYC?

So bored in your red state that you have to come here ?

What are you a Red Commie ?

@"Plenty more of this shite coming your way Sheeple."

Nypd needs to step up their shooting range test requirements

why didnt the media do the same with george floyd his first criminal act caused the police to be called and his erratic behavior caused him to die.

"george floyd... his erratic behavior caused him to die"

The massive amounts of fentanyl in his body didn't help neither!