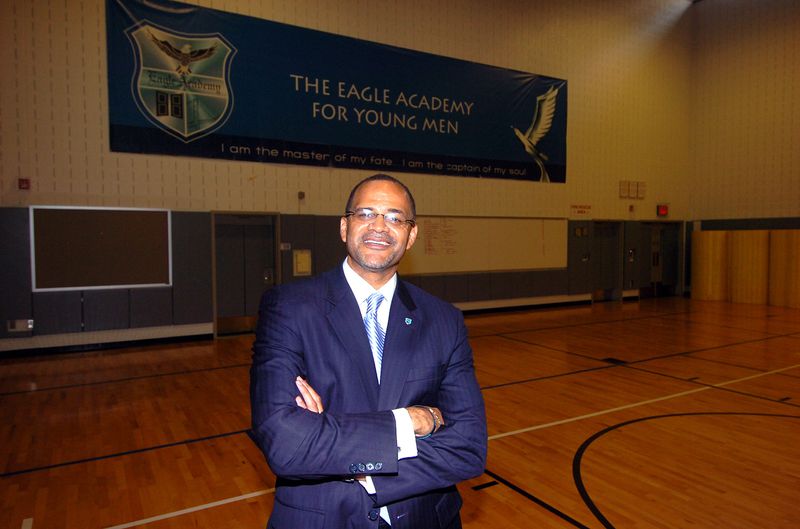 Democratic mayoral nominee Eric Adams is taking advice from a former NYPD chief who once said he’d plead the Fifth Amendment in a corruption trial — and whose brother is now a top contender to become Adams’ schools chancellor if he’s elected.

And Banks’ brother, David Banks, the president of the Eagle Academy Foundation, is in the mix with Adams as well, but in a slightly different respect.

He’s being eyed as someone who could helm the city’s Department of Education in an Adams’ administration, according to two sources familiar with Adams’ expected transition.

According to one of those sources, Banks is a virtual shoo-in for the job.

“I would be shocked if there were other candidates who came out ahead of him,” the source said. “They go way, way back.”

When asked about Philip Banks’s role as an advisor, Adams’ campaign spokesman Evan Thies said he “is one of a number of policing experts who have offered their institutional knowledge of the department, including former Commissioner Bratton and other former chiefs of department.”

“I’m relying on everyone with experience in law enforcement. I’m not excluding anyone to keep my city safe,” he said Thursday. “Everyone who has served, everyone from police officers to former heads, I’m relying on.”

It's not what you know, it's who you know! Connect the dots!

An overwhelming number of people will vote for Eric. Lolz

Thugs in Brooklyn got busted for animal cruelty with 25 fighting dogs. It made headlines the other day. Right by Adams office.
Thugs arrested and released in 35 minutes, the whole gang went back to the house and beat the hell out of both the woman and husband who called the cops in front of the kids.
Not a peep on the news, not a peep from Adams !!

Eric Adams is not different, nor is he any better.

Deblasio 2.0 will make this city MUCH WORSE, NOT BETTER!!

The savagery and barbarism of the philistines and troglodytes who destroyed this city, this nation, this world, are the same ones who pledge their obedience to the criminally insane oligarchy whose direct orders are to depopulate by any means necessary. This is nothing new, 'Sheeple.' If this is your idea of 'WOKE,' then your doing it wrong. Time to start punching back - TWICE AS HARD!

wrong, the story was mentioned
https://www.youtube.com/watch?v=-5c4nMtuW14

Have to say that Adams is on the same level as a TrumpTurd.
Sad.

I’M VOTING FOR CURTUS SLIWA....despite being a registered Democrat. I’m regretting being a Dem ....and will re-register when the time comes to GOP!!!!!
ADAMS IS JUST A HOUSE SERVANT FOR THE POWERS THAT BE!!!!
The REBNY plantation owners run NYC.
TOO MUCH LANDLORD AND REAL ESTATE INTERESTS HAVE BEEN RUINING OUR LIVES AND PUTTING US INTO A WAGE SLAVE CATEGORY.

@“ TOO MUCH LANDLORD AND REAL ESTATE INTERESTS HAVE BEEN RUINING OUR LIVES AND PUTTING US INTO A WAGE SLAVE CATEGORY.”

Are you a communist? If so , does that mean Silwa is a commie too?

Are you a communist? If so , does that mean Silwa is a commie too?

Put your commie indoctrination on display more so we can all see what you really are.

@“ TOO MUCH LANDLORD AND REAL ESTATE INTERESTS HAVE BEEN RUINING OUR LIVES AND PUTTING US INTO A WAGE SLAVE CATEGORY.”

Have to say that Adams is on the same level as a TrumpTurd.
Sad.


Which is a lot higher than the frog's ass at the bottom of the coal mine, Bidet Turd Bidenzee Marxist.