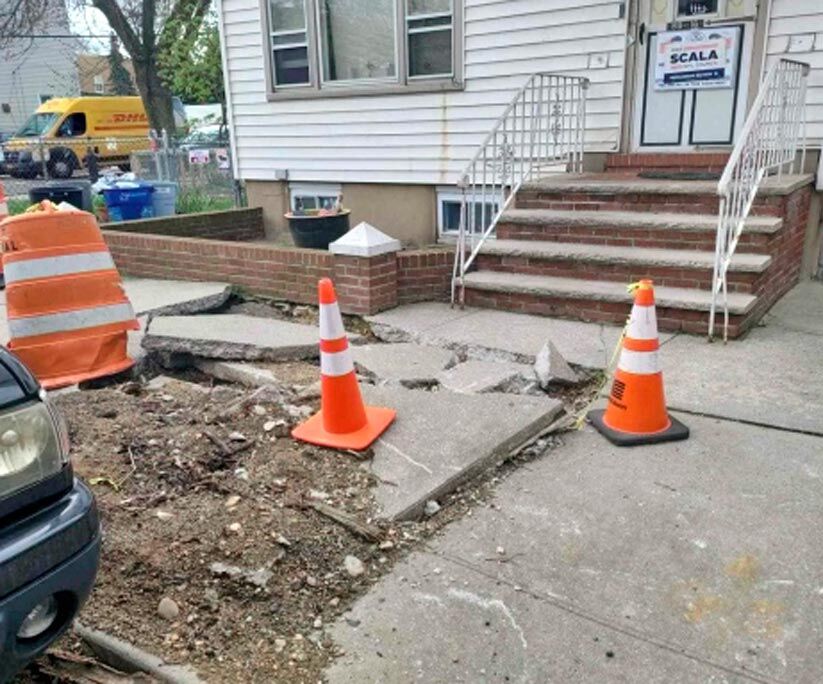 Shards of cement are scattered in a pile in front of 88-16 102 Road in Ozone Park. The stretch of sidewalk looks like it was attacked by a demolition crew.

Only it’s no temporary construction site. It’s been like that for a year since a downed tree was uprooted and disposed of in the wake of Tropical Storm Isaias.

Two years ago the city announced that it would no longer charge homeowners for sidewalk damage caused by city trees and promised to ramp up sidewalk repairs in problem areas.

A year after Tropical Storm Isaias pummeled the borough, collapsing trees and power lines, and hitting especially hard in South Queens, Ozone Park still bears the evidence that the city has not been living up to Mayor de Blasio’s promise about sidewalk maintenance or repair.

In the wake of that storm, the Chronicle documented the widespread instances of poor arboreal health in Ozone Park that led to a large number of downed trees. Now over a year later, the Ozone Park Residents Block Association has begun calling out the city’s failure to replace the sidewalk in the areas where uprooted trees disrupted the neighborhood’s pedestrian fabric.

“In what can only be described as reckless, careless, a dereliction of duty, lack of concern, failing to protect our residents, amongst the many adjectives I can use, the City of NY has dropped the ball on our residents,” wrote Sam Esposito, the civic group’s president, in a press release calling attention to the problem.

The group listed seven sites in the neighborhood where it says trees overturned by Tropical Storm Isaias turned the surrounding sidewalk into a pile of rubble that has yet to be repaired by the city. In five of the sites, Esposito said that he had coordinated with the homeowners, but he ensured that a 311 complaint was filed in each case.

Unfortunately, a long wait time for sidewalk repair is not uncommon, despite recent efforts from the city to correct the issue.

This administration gets worse and worse when one thinks it can’t!

The cars. Cars are the problem.

Where does the money go?

Build Back Better has a single problem, the powers to be couldn't build anything initially to begin with. :) :) :)

Anybody who thinks the city is going to save their ass is a fool.
Especially if your white or a small private homeowner with no contract to house Section 8s
Homeowner gotta load all that crap up, level it out and re-pour the sidewalk slabs themselves. That job looks around $4500-$6000 cash.
Just frame it out with 6 or so expansion joints, do the pour quick. Then keep your mouth shut, you don't know nothing.
The city is going bankrupt, rampant with democrat nepotism seating clueless idiots to every position. Nobody will admit it until after the election.
I see some of these people (so called leaders) on TV and note they hardly speak beyond 2nd grade inner city ebonic ghetto gibberish.

Gotta vote Sliwa, anymore of this crap under another Dinkins or deBlasio will sink everybody.

All the taxes we pay, and this is how the city helps us in return.

Queens homeowners and residents are always overlooked unless when it comes time for elections and when you have to pay the tax bill.

"Two years ago the city announced that it would no longer charge homeowners for sidewalk damage caused by city trees and promised to ramp up sidewalk repairs in problem areas".

One of the few sane things NYC has done lately! Talk about a ripoff!

It's egregious and unconscionable enough that the former White, politically failed leadership was an experiment in constituency ignored terror, with zero social contract. Now that the third-tier scourge of Black failed leadership has begun their undeservedly, calculated, upward climb to more responsible (but, IRRESPONSIBLE) city/state government invasion/colonization, I am pining for the merely QUAINT days of the recent past, when my derelict Councilboy, Eric Ulrich (a/k/a Derelict Dull-rich), fathead Assemblyman, Mike Miller and Sopranos reject, Joe 'The Shithead' Addabbo all ignored my legitimate complaints (of public violations, broken curbs caused by the DOT, etc.) with impunity. The 'NEW & DEVOLVED' breed (of genetically mutated mountain gorillas. who speak Ebonics as a first language) are an allout embarrassment to primates!

These Ebonics speaking, public service counterfeiters are also the reason for why the (mostly) White population in Florida has exponentially climbed because of the massive New York exodus from fed up and disguusted former New Yorkers, ALL of whom were driven out of their multi-generational city homes, and who now seek permanent asylum under Florida's SANE, Republican Governor, Ron DeSantis: To escape the Third World blight over which 'Tall 'N Stupid' anarchist, Bill de BLASS-hole has infected and inflicted this ravaging, crumbling, imploding metropolis——to obliterating effect! Yet, Mayor Chirlane's Minstrel Show-spouse seriously believes that he has a shot at the former Albany Capo's, 'Handy Andy' CUOMIGULA'S sexual molesting, top mob gubernatorial job——and, the frightening part of it all is that the ALL consuming DemonRat scourges (who continually keep voting for self-destruction and government tyranny throughout New York State) will likely line up at the faulty poling sites (of political enslavement for life!) to christen their QUINTESSENTIAL class A narcissist, oblivious to the Cold Light of Day realities that they continue to pay a soul-crushing price for their willful ignorance and blind faith!

ALAS, even Pavlov's dogs could not be conditioned to behave with such staggering loyalty——and, THEY get ACTUAL REWARDS for their programmed loyalty and allegiance!