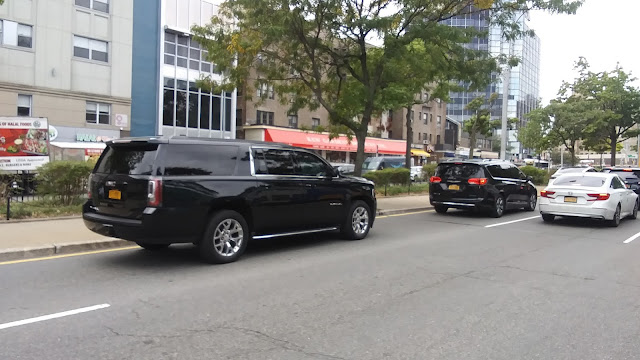 New York City Mayor Bill de Blasio misused police resources on his security detail, a new report released Thursday by the city's Department of Investigation (DOI) says, to assist in his adult daughter's move out of Brooklyn, as well as to transport campaign staff during his presidential bid.

The DOI found that the Democratic mayor misused police resources by directing members of his Executive Protection Unit (EPU) to help move his daughter, Chiara de Blasio, out of her apartment in Brooklyn in 2018. NYPD personnel helped carry furniture and an NYPD sprinter van carried her belongings to Gracie Mansion, which is the official residence of the mayor of New York City located in Manhattan.

EPU detectives also drove the mayor’s son, Dante de Blasio, to or from Yale University in New Haven, Connecticut, on multiple occasions without either the mayor or his wife and first lady Chirlane McCray present. It was also common practice for the EPU to drive Dante de Blasio to locations around New York City without his father or mother, typically at the direction of EPU superiors.

"Although it is the position of the NYPD Intelligence Bureau that both de Blasio children should have full-time protection, both children declined an assigned detail as adults," the 49-page report says.

DOI also determined that the City of New York expended $319,794 for the members of Mayor de Blasio’s security detail to travel during his presidential campaign trips. The mayor has still not reimbursed the city for those funds either personally or through his campaign. The report also says that during these campaign trips, EPU members occasionally transported de Blasio’s campaign staffers with the mayor.

Both reflect a use of NYPD resources for political purposes, according to the DOI.

For approximately one year, the security detail has been conducting frequent security checks at houses owned by the mayor in Brooklyn, where neither he nor his family members reside. The NYPD inspector in charge of the first family’s security detail "actively obstructed and sought to thwart this investigation, frustrating DOI’s efforts to learn the full facts regarding these allegations," the report says.

Come on, Man! It’s not like the money is coming from the Thrive NYC bag.

Nothing new here either.
They even got into accidents and all was good.
DeBolshevik all of a sudden has some serious enemies?
Remember Benito?
They took care of him via sexual harassment charges.
The heavy stuff, thousands of dead elderly in nursing home apparently was not a good enough reason...

NYC #BLUEANON politics is a clown show.
Prove me wrong ...

I wonder does he charge them rent too like a certain former president who plays a lot of golf.

Now, stop me if you've heard this saga before, plebeians of QUEENS County (and, beyond), but wasnt the former, disgraced, New York City Comptroller, Alan Hevesi found guilty for abusing state employees to drive around his cancer stricken wife, went to jail (before they cut his sentence in half and granted him early release from the hoosegow) and paid hefty restitution to New York State for his crime of not paying for his wife's chauffeur services out of pocket?

If this current City Hall disgrace isn't tarred, feathered and remanded to an Arctic prison for life after his egregious, unconscionable crimes against the City of New York with impunity, then it's time to turn your backs on government, altogether, if it is bent on practicing 'selective' and 'occasional' representation. There is nothing worse than leaving a people to their own devices of vigilantism, because it means that corruption maintains a stranglehold above at the top levels of government abuse, waste, fraud, graft and mismanagement.

More importantly, it's long overdue for the ever languishing American middle class to bolt from a city that has taken every subversive action to hasten their demise, with unprecedented impunity. Either leave right now and voluntarily——or be DRAGGED!

I wonder does he charge them rent too like a certain former president who plays a lot of golf.

Really fine story, problem is none of is true.
CNN special.
As far as golfing is concerned the one before played even more golf, the one we have now can't even speak, he is performing from a fake set?!?! next to the White House?

This instance is not the cops, but the ONE who puts them in this position should be charged.

@"Really fine story, problem is none of is true.
CNN special.
As far as golfing is concerned the one before played even more golf, the one we have now can't even speak, he is"

Hard to believe that there are people alive on this planet do dumb and brainwashed as you?
Are you really saying that Trump didn't charge rent to his Secret Service detail?
Do you really believe that Obama played more golf than Trump while in office.

Welcome to the "Queens Dumbo". Queens news for the dumbest folks on the planet.