The D.O.T. and Dept. Of City Planning suddenly cares about community input on open restaurants program 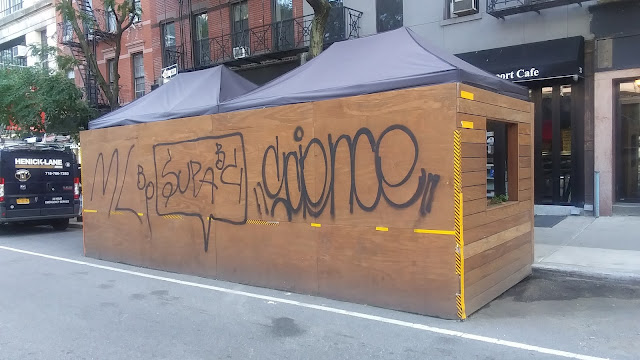 Nearly 12,000 restaurants have taken part to date in the city's Open Restaurants program, the spinoff initiative from the Open Streets program which allows restaurants and bars to use street space for outdoor dining structures. While most New Yorkers seem to have embraced the changes to our urban landscape with open arms—one survey found that two-thirds of New Yorkers think the city “was right to close its streets to cars and open them to pedestrians and restaurants”—many believe there is still plenty of room for improvement. And with Open Streets and its various offshoots set to become permanent parts of the NYC landscape, the city is working on just that.

The Department of City Planning (DCP) and Department of Transportation (DOT) announced this week that they are launching a public engagement process to improve the designs and rules regarding permanent outdoor dining setups.

“Open Restaurants not only helped save New York’s world-renowned restaurant industry, it also showed how we can dynamically reimagine our streetscape,” said DOT Commissioner Hank Gutman. “Developing design guidelines will ensure that this emergency program can be transformed into a permanent part of our city, anchoring restaurants in our communities so that this program continues to flourish.”

While Open Restaurants was enacted under emergency executive order by Mayor Bill de Blasio in 2020 in the midst of the pandemic—the mayor has said that the program has helped save around 100,000 jobs—the city and legislature are now engaging with the more complicated task of making it permanent. That includes a zoning text amendment which many restaurateurs are in favor of (it's currently in public review) that would remove geographic restrictions of where sidewalk cafes can be located.

Where the public's input will come in is in trying to determine how to best "integrate these new setups into the complex environment of NYC streets," as the DOT put it. That input will come via in-person and remote roundtables over the next six months—the schedule of those events will be listed on the DOT webpage and on NYC Engage—culminating in the release of new design guidelines by Spring 2022.

Isn't it nice that asshole Hank Gutman and the D.O.T. and those asshole city planners are deigning, deferring and abdicating their responsibilities to the citizens to fix the mess they made with their shithead policy making without thinking of the ramifications of them. Like a commentator said the other day about how these are supposed to be for the benefit of people's health even though you're still eating on the gutter. 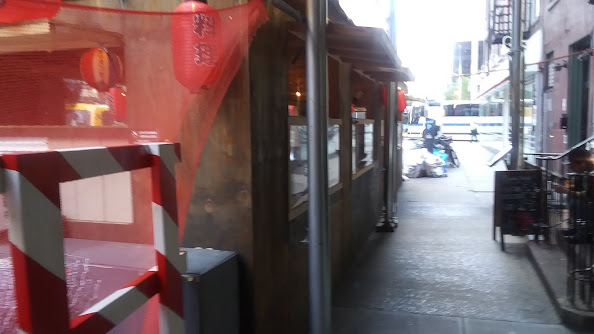 Meanwhile, residents and even lawmakers are demanding to shed the sheds.

The ha-ha funny part of this is that the indoor dining ban never made the slightest bit of difference, health-wise. It just caused massive turmoil, job and business losses, and ramped up the paranoia among the cat ladies and soy-boys that drive everything these days. It's all a long con, but our ruling class is so deep into it now (and a good portion of them like little gnome Fauxchi are making mad bank) that they can't figure out a way out. So they rant about getting to 100% vaccination rates for a vax that doesn't even work. But it's all pretend now, all LARPing, all smoke and mirrors.

We're living in a fun-house run by a sadistic and psychopathic ruling class, and it ain't no fun.

You have to be asleep to believe it!
Dominion decides based on instructions from Deep State.

So they rant about getting to 100% vaccination rates for a vax that doesn't even work.

@"So they rant about getting to 100% vaccination rates for a vax that doesn't even work."

Thank you Dr. Dumbass. And where did you get your medical qualifications from ?

The Trump University? The Infowars School of Idiots ? The Q-Anon Academy for Assholes? or the Tucker Carlson College of out of work Circus Clowns?

Shut up! Shut up ! you are all crazy!

I ate in one of the sheds in the winter time. I was freezing as ebikes, scooters and delivery bicycles zoomed past the rickety table on one side and trucks and cars drove past on the other. I nearly got hit when I stuck my head out of the shed looking for the waitress. I got sick from eating in the outdoor shed from anxiety and nervousness.

It's not wonderful that this City is practicing medical apartheid.

"The Trump University? The Infowars School of Idiots ? The Q-Anon Academy for Assholes? or the Tucker Carlson College of out of work Circus Clowns?"
#TDS Alert

Thank you Dr. Dumbass. And where did you get your medical qualifications from ?

And you? Pfizer or The Frauduci University?
If stupidity would hurt, you'd be screaming.

You New Yorker's keep voting the democrat ticket, so this is what you get. No tears for you NYC. Live with it!