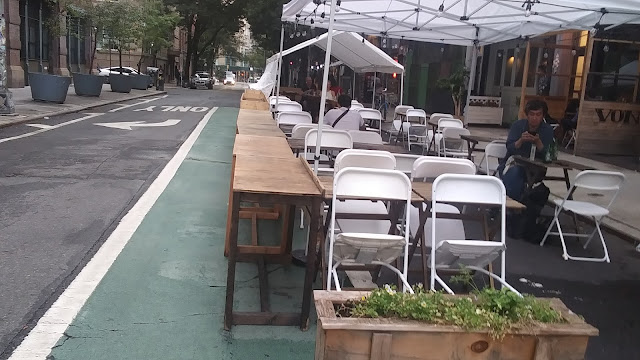 New York City restaurant and bar owners fear that their bottom line could freeze up this winter if Mayor de Blasio doesn’t renew an emergency permit allowing them to use propane heaters for outdoor service.

The permit, first issued by de Blasio in October 2020, lifted a ban on portable propane heaters to help keep eateries and watering holes open at a time when indoor service was prohibited because of COVID-19. But the waiver expired over the summer, and de Blasio has not said whether he’ll roll out another one ahead of this cold season.

James Mallios, owner of Amali, a Mediterranean restaurant on the Upper East Side is concerned.

Mallios said the propane heater permit was “one of the few bright spots” during the pandemic and that his restaurant would’ve gone belly up without it.

Mallios is one of 85 restaurant and bar owners who sent de Blasio and Council Speaker Corey Johnson a letter in April, pleading to keep propane heaters burning this winter.

Neither men responded to the note, Mallios said. “That was disheartening,” he added.

Before de Blasio’s emergency permit, propane heaters were long prohibited in commercial and hospitality settings due to fire hazards.

FDNY data shows there have been no propane-related explosions or fires at any city restaurants or bars since de Blasio’s order, which specified that heaters could only be placed on sidewalks, not near street seating.

Still, FDNY inspectors have issued more than 1,200 propane compliance violations and confiscated at least 1,000 improperly stored tanks since the ban was lifted, according to the data.

“In some of the most egregious incidents, 20-pound containers of propane were found on roadways, concealed by planters and other objects designed to provide vehicle impact protection,” said Frank Dwyer, an FDNY spokesman.

Sheeple Prepare for the Economic Collapse !
It amazes me how many people are not awake from what is really going on.

Where is the mandate?

Try to to find it.

Bottom line?😂
What about a winter spike in a.....perhaps new....COVID variant?
Overpriced bars and restaurants worrying?
Fuck ‘em!!!!
Vax up , you morons!
And PUHLEEZE....keep your conspiracy theories to yourselves. You bore us with your eternal sputtering fuming ignorance🤮!!!!!SHADDUP!!!!

“ Sheeple Prepare for the Economic Collapse !”

So, what should we do ? Oh wise and wonderful leader.

Vax up , you morons!
You bore us with your eternal sputtering fuming ignorance


Go for it jerky.

Speak for yourself only. You - no us, chicom.

@Where is the mandate?


No mandate. The minute it shows up, there will be lawsuits. Fake everything.

Anti science morons.
Vax up and keep your spittle to yourselves.
Maspeth morons, no doubt. What is it about western Wueens that breeds genetic rejects?😂😂😂😂

Get this straight.....morons.....vax vax vax!
Wear a fucking mask where required , by the way, BY LAW!
Infecting Americans is a form of treason. You got it? TREASON! It’s anti American you dumb chitrools (that’s Italian for cucumber). All seeds and no brains. Numb nuts!

Woops, even the New York Times is now admitting that (1) the vax ain't gonna help ya grandma and that (2) kids don't need the flippin' vax. In other words, the vax is a gigantic fraud. All those millions of "free" shots at $20 a pop going to big pharma!

Wear a fucking mask where required , by the way, BY LAW!

In your head is law. Passed by you?


Infecting Americans is a form of treason

Especially with the CCP virus. Get some extra tinfoil.

Would that be anti bio weapon science morons CCP boy?

Is that some Q-Anon code? Or is it the musings of a retard?

Oooh! Musta hit a few nerves of these anti science morons. They’re anti posting en masse. Babble all you want. Show us you dim IQs!😂😂😂😭😭Dontcha love it?😂😂😂😂if you’re turds wanna still believe the world is flat....keep it to yourselves.

Is that some Q-Anon code? Or is it the musings of a retard?

Q-Anon, the retard is asking this question? hahahaha

Says the CCP "science" monitor who is dumb as a rock.
World is flat? hahahaha, what an idiot hahahaha

You mean flat Earth? Those were the "science" crew from the church.
They fit perfectly in with today's "vaccine science crew".
Same degenerate, control freaks.
They all are YOUR PEOPLE past and present.

Q-Anon was real ? Or is #BLUEANON real ? Prove me wrong !

@“ World is flat? hahahaha, what an idiot hahahaha”

Vax up and keep your spittle to yourselves.