After the floods, home insurance premiums rise above sea level 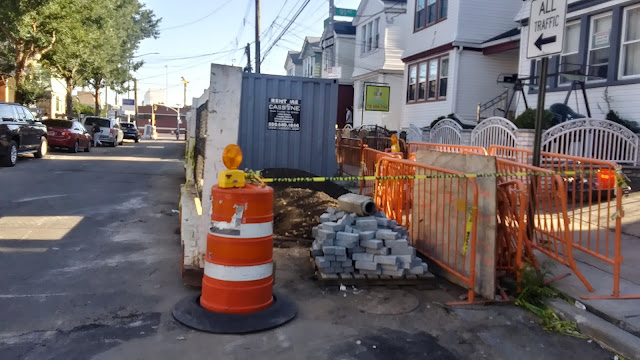 Premiums will be going up for most of the 53,000 New York City property owners covered by the federal flood insurance system, government stats reviewed by THE CITY show.

The National Flood Insurance Program rates that took effect Oct. 1 for new policyholders — and will hit in April for existing ones — have homeowners like Brooklyn’s Carly Baker-Rice facing new stress, on top of the toll of recent storms.

Baker-Rice and her husband bought their house in Red Hook last June in a move from Fort Greene, even though they predicted they’d eventually be “up to their knees in sewage” due to flooding in their new place, she said.

Just over a year into homeownership, that happened sooner than she thought. In August, Tropical Storm Henri flooded their basement and on Sept. 1, the deadly remnants of Hurricane Ida sent water splashing in through the front door.

Baker-Rice is still dealing with the damage and waiting for her insurance claims to go through — and she hasn’t been able to obtain a quote from her broker yet about how a new federal flood insurance policy might make her premium go up.

“It makes my heart race, and I’m already somewhat crippled by the amount of stress that I’ve been under for the last month,” said Baker-Rice, 38, who works as a corporate training consultant. “It’s incredibly frightening to not know what it’s going to go up by, knowing what some of the existing rates out there are.”

Prices will go up for at least 62% of flood insurance policies in New York City. More than 53,000 properties, including 19,440 single-family homes, are insured by FEMA’s program in the five boroughs, an analysis by THE CITY found. Nationally, more homeowners will be taking bigger hits: FEMA estimates 75% will see increases, which could be as much as 18% per year.

No more free handouts ? Payed by me the tax payer...

How many people actually even buy flood insurance?

PS - I notice that the commie rag The City doesn't allow comments. Only deplorable blogs like QC still let the people have a voice!

But of course, mon ami!

How many people actually even buy flood insurance?

Can they buy flood insurance is a better question.

No more free handouts ? Payed by me the tax payer...

You payed? Where? You payed out the additional rope?
Man, I PAID for your fucking bike lanes, plus your education - what a waste of money.

Wonderful, as if living in the City isn't expensive enough already.

>PS - I notice that the commie rag The City doesn't allow comments. Only deplorable blogs like QC still let the people have a voice!

Can't allow comments, wrongthink might slip through and offend those in power.

Of course they are not paying.
Check out this John Lewis insurance ad: