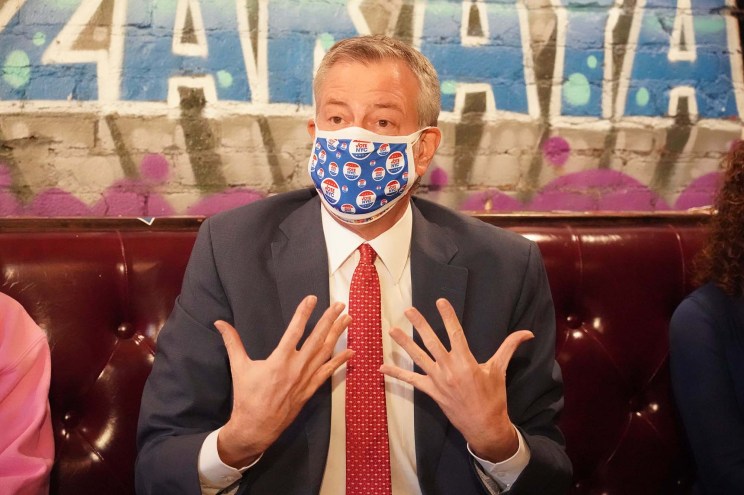 Just when you thought my administration can’t get any worse… it's unbelievable.
Let’s Go Brandon!

I always wanted to travel and see places that are less fortunate than we are. Now I don’t have to !

Like me BIDEN is building a fence around his summer house....

I’m wearing a mask cause there’s a horrible smell of TrumpTurds around here.

Stop asking me about an untested vaccine mandate for all City Workers and children as young as five. I do as I’m told by my master George Soros. You may heard this before but my hands are tied. I’m only following orders.

I coulda been a contender. I coulda been president except for those bums in Queens.
I got ‘em but good. My secret plan making all of Queens one giant bike lane starts the day I leave office. Me and Jimmy VB cashed in on this one.Hasta La Veesta, baby!

There is no truth to the rumor that Jimmy Van Bremmer is a Bully. You can ignore those placards in his neighbor windows.

"I’m wearing a mask cause there’s a horrible smell of TrumpTurds around here."

BTW, if you want to do something that actually WILL help you, start taking Vit D supplements NOW if you don't already, because the sun no longer makes Vit D in NYC this time of year. Cases are about to boom here in the Big Rotten Apple for this reason.

Oh and: "vitamin D deficiency associated with 630% increase in death risk in hospitalized patients with covid," from study in Israel.

Basically, the ONLY thing we needed to do from the start of this FakeDemic is to tell people "make sure your Vitamin D levels are high." That's it. The rest has all been a show and a power grab. But hey, the billionaires are MUCH richer now, and Das Jab has minted 9 fresh NEW billionaires. So everything's great!!

I need more than 2 hands to count the ways I've screwed this city!

Chirlaine I told you not to wash your underwear!

I stink because I'm a Biden Turd double vaccinated moron.

Anonymous said...
I’m wearing a mask cause there’s a horrible smell of TrumpTurds around here.


Nice headline to the world

Garbage Piling Up Everywhere, 45% of Firemen and 25% of Police Facing Termination Friday – This Is Democrat De Blasio’s New York City

is not really accurate, let's fix it

Garbage Piling Up Everywhere, 45% of Firemen and 25% of Police Facing Termination Friday – This Is Communist De Blasio’s New York City

@But hey, the billionaires are MUCH richer now, and Das Jab has minted 9 fresh NEW billionaires.@

The damage caused to the world population cannot be measured in money.
The millions of deaths, serious side effects, the controlled demolition of the supply chain via outsourcing manufacturing to China where now not much can be produced due to exorbitant energy prices, restrictions due to the "global climate change" scam.
The only thing insourced are millions of "migrants" who happen to be just invading USA and Europe. Specially Poland.
In a very organized fashion, complete with cell phones and travel to the borders.
This will not end well people.
We sold our debt (money, bonds) to China.
Now they holding ever worthless pieces of papers, I owe you-s.
Even with their sock puppet in charge, things don't look good.
Evergrande (Real Estate) is defaulting on $300 Billion in China.
Local governments there have over $4 Trillion in debt.
The globalists are itching for action while they sit back and enjoy the ensuing chaos.
Covid-19 was only the opening act.

Shut up you little people, I’m running for governor of NY State. You’re gonna vote for me because I’m tall and I’m skinny. And no one knows we got our daughter locked up in the basement because she’s got a big mouth.

"I ate his liver with some fava beans and a nice Chianti."

I couldn't have said it better myself.

Absolutely.
There was a reason for cod-liver oil supplementation in the old days, from October until April.
The only thing big pharma crooks accomplished is more disease, more treatment for sick people, notice nobody is ever cured, and huge profits while managing people to their demise.
J&J has a 2 billion dollar plus judgement against them over baby powder?
And we supposed to trust J&J with vaccines!
Same with Pfizer.
Is not about health, is about control.
That's how communists roll.
Also about money. If people quit there goes the cushy 20 years of service and you can retire business. Of course you need to be alive to enjoy the benefits.
Diabolical.