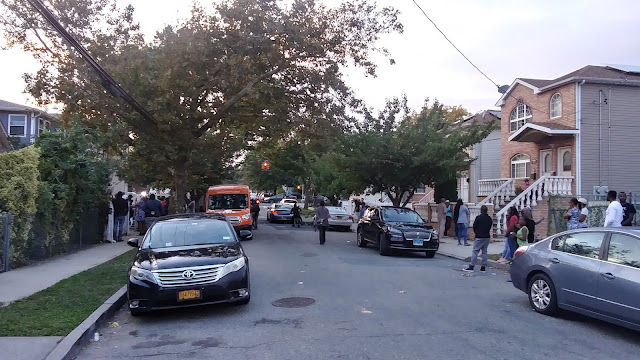 For the residents of Brookville, it was a tumultuous three days last week, as a neighbor went through what appeared to be an emotional episode and later climbed a tree, which he stayed in for approximately 52 hours.

Roody Thomas, 44, allegedly got into an altercation with his mother, Irlande Defailly, 65, on Oct. 6 and said, “I am going to kill you,” according to reports and the police.

A week prior to the altercation, Thomas had an alleged argument with a 50-year-old girlfriend in a BMW on Sept. 30, which led to a warrant being issued for his arrest for assault, according to a New York Times report.

Defailly called police on Oct. 6 and filed a complaint the following day.

“There is a complaint report on file for incidents that occurred between August 31, 2021 through October 7, 2021,” said a police spokeswoman via email. “A 65-year-old female complainant reported that she got into a verbal dispute with a 44-year-old male who threatened her with serious physical harm on October 7, 2021.”

The report also stated that on Aug. 31, 2021 the male intentionally broke her door by forcefully hitting it with his fists, according to the NYPD spokeswoman.

But following last week’s incident, Thomas has not been arrested.

Police came to the scene at 145th Avenue and 225th Street Oct. 6, and Thomas, scared to go back to Riker’s Island, which he even filed a lawsuit about, alleging mistreatment at the jail in 2008, went up the roof of his mother’s house and climbed a nearby tree, according to Brookville resident Dr. Reba Perry.

“I’m a neighbor,” Perry, who said police turned the neighborhood upside down for three days, told the Chronicle Monday. “There was noise, banging and floodlights ... if they would have called the crisis prevention program, it would never have led up to this.”

Thomas was traumatized from his time on Rikers, according to Perry. Instead of a crisis management team, nearly 50 officers were on the scene and tried to get Thomas out of the tree by bribing him with food, using bright floodlights, flying drones and banging on some drums.

“There was noise and banging and floodlights and that was never the goal,” said Perry, who has known Thomas for six years. “The goal was to get him treatment ... and that could have been resolved instead of all that manpower.”

Perry, who also happens to be an NYPD chaplain, suggested to police on Oct. 6, that they should reach out to a mental health crisis prevention team, but she said her recommendation was ignored.

“If they had called them from the beginning it would never had led up to this and now he is publicly humiliated and our neighborhood is now a target for a man that was in a tree,” said Perry. “People are still coming here to take pictures and it’s embarrassing.”

Perry, who also has a background as an emergency room nurse and has a sibling with schizophrenia, does not excuse any of Thomas’ behavior when it comes to an alleged assault, but as someone who is a caregiver for her brother and has been trained to recognize a variety of mental health issues, she believes the tactics used by the police were not helpful and prolonged an already bad situation.

“This was obviously a fairly unique and complicated situation that unfolded over days,” said the police spokeswoman via email. “The first consideration was not to do anything that would further endanger Mr. Thomas or the officers working to get him down safely.”

What do you expect when the city's high cost mental health service that's ruled by Chirlane Wilhelm deBlasio is basically a shell company.

Well at least the Quotation Drone is safely down from the tree.
Now, what about the “Prove me wrong guy” and the “hahahahahahahaha…” guy? Who is going to help them?

A ten year old with a BB gun could have done a better job !

"nearly 50 officers were on the scene"

Lolz!! Well why not, it's not as if any crime is happening in NYC. Oh, I mean any prosecuting. Plenty of crime, but you get a pat on the back and a "see ya later."

Thank god we have our ever-sniffing investigative journalists from the NY Times on the case uncovering what's going on there! Oh wait, they have no interest at all. Too busy still trying to find the Trump pee tape or making excuses for Sloppy Joe.

It takes a smart man to play dumb.
Mr. T

I read about your city every day and I don't understand it. A man's up a tree and they send a SWAT team? What happened to the liberal concept of social worker intervention that all of you have been promoting in the far east. In my little town recently, a SWAT team was sent to check on an old man's welfare because he said he was going to kill himself. The old man thought his house was under attack and said that the police fired on him, so he fired back. They slightly wounded him. The old man's first shot hit a veteran SWAT team member in the head and he has been in and out of a coma for over three weeks. Our great leaders need to use the resources of social workers - then so many valuable police officers will not be putting themselves and the public in danger of being inadvertently shot by overreacting.

Well at least the Quotation Drone is safely down from the tree.

Actually looks like you. What are you doing on the tree?
Harvest season? Looking for other shape shifters?

Well, if they weren’t doing this, they’d have been sitting in their cars staring at their phones. Doing something is better than doing nothing in this case.

They should have released some black bears, python snakes, and baboons and let them climb the tree this scared fool was hiding out in.

Once he saw them, I sure his scared ass would have jumped down sooner and ask for help from Chirlane McCray.

Meanwhile a "Woman" was charged with hate crime for allegedly sparking a fire at Brooklyn Y. Yeshiva. These are the criminal nuts deBozio and his wifie have left on our streets to cause harm to us ! Many prior arrests and busts for assault, domestic assault, criminal possession of stolen property and criminal contempt, cops said.

Be careful what you wish for, if you're a tyrant.
"It does not take a majority to prevail... but rather an irate, tireless minority, keen on setting brushfires of freedom in the minds of men." -Samuel Adams

"Weaponizing empathy" A very apt description of our times under the wacky Progressive agenda.