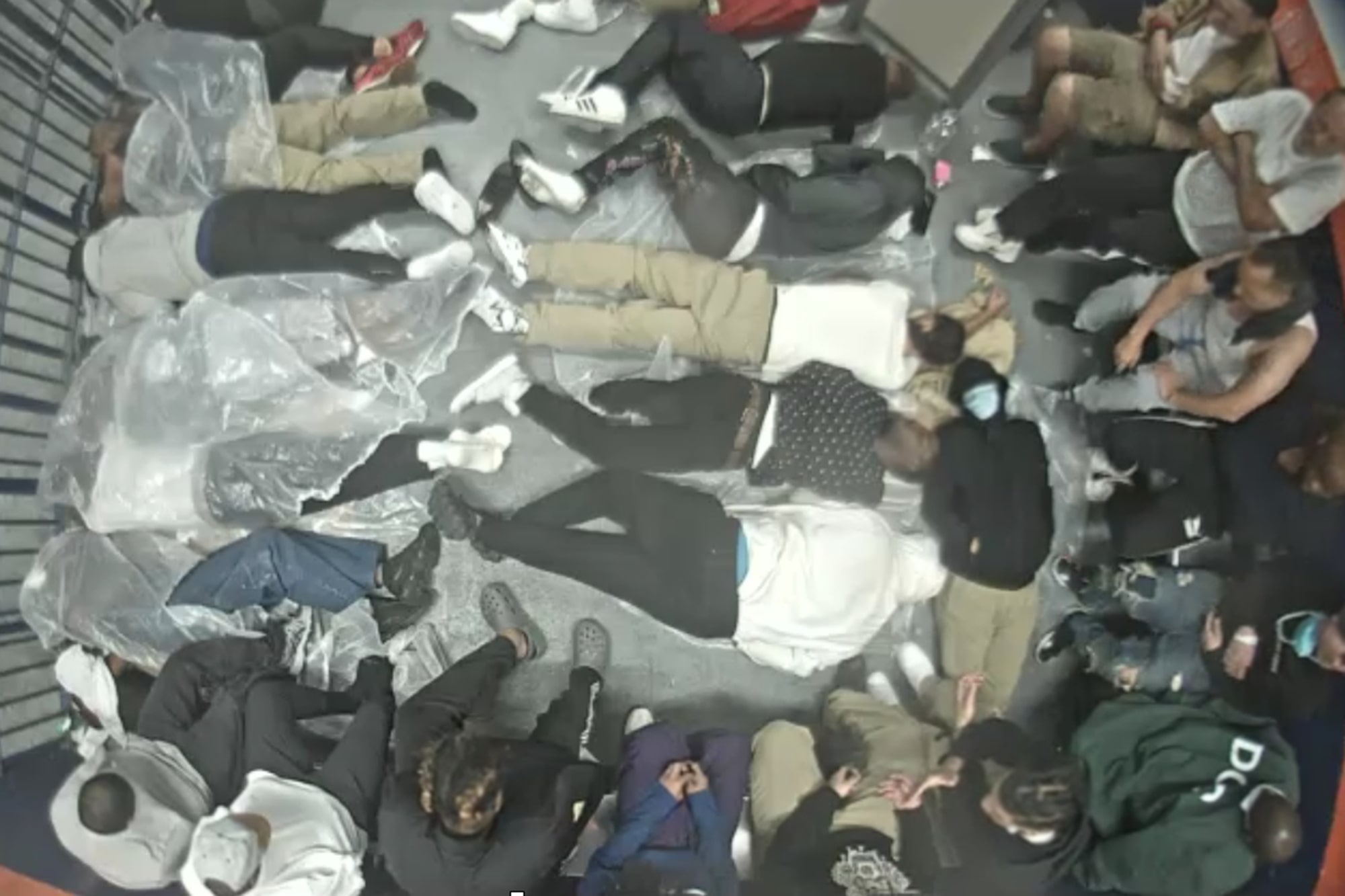 Dozens of men crammed together for days in temporary holding cells amid a pandemic. Filthy floors sullied with rotten food, maggots, urine, feces and blood. Plastic sheets for blankets, cardboard boxes for beds and bags that substituted for toilets.

This is what the epicenter of the crisis on Rikers Island — which has a whopping $1.2 billion budget for fiscal year 2022 — looked like for months.

The Post obtained exclusive photos showing the intake cells at the Otis Bantum Correctional Center on Rikers Island between July and late September where hundreds of inmates languished for days or weeks on end in violation of city regulations, which require they be assigned a housing area within 24 hours.

The images show as many as 26 men stuffed body to body in single cells where they were forced to relieve themselves inside plastic bags and take turns sleeping on the fetid floors.

In one image, an inmate is seen curled up on the floor — outside of the holding cell — because there was nowhere else to put him and when the facility was ready to burst, or when elected officials came to visit, detainees were stashed in a gym, Department of Correction sources said.

“It was inhumane … They’re not supposed to be there that long, the intake is just a place to process the inmates,” a jailhouse source told The Post of the conditions at OBCC, which housed most new admissions to the jail before intake was moved to another, larger facility in late September with double the clinic space.

“And the sad thing about it is … you couldn’t do anything about it, it was all management,” the source said. “They knew what was going on and they did nothing.”

Internal records obtained by The Post offer a glimpse of the problem’s scope and indicate at least 256 inmates festered inside the OBCC intake beyond the 24-hour limit between June and late September because of “medical delay” and “shortage of DOC staff.”

One of those detainees — 42-year-old Isaabdul Karim — died three weeks after he spent 10 days “mired in intake,” where he contracted COVID-19, his lawyers have said. His cause of death is still being determined by the city’s medical examiner.

During a five-day period in mid-September, shortly before most intake processes were moved to the Eric M. Taylor Center, at least 105 inmates were inside the crowded cells long after they should have been moved, records show.

In response, a spokesperson for the DOC said the “conditions in these photos do not exist at Rikers Island today.”

“We’ve closed OBCC’s intake and reopened the Eric M. Taylor Center for intake purposes, ended overcrowding and long waits in intake, and thoroughly cleaned this and many other facilities,” the spokesperson said.

So the D.O.C. had to reopen a jail to ease intake. Which confirms that City Council's legislating and Mayor de blasio's decision to close Rikers exacerbated the humanitarian crisis in the prisons.

They are running Rikers into the ground so that the prison closes and it becomes an exclusive community on the East River.

Looking forward to prison in your neighborhood.

I don't even recognize my country anymore... And the scary part is how relatively fast it's happened.

Looks like the soft on crime approach is not working.

The past several months have been mind-blowing.

The greatest threat is this deBozio administration !

You want democrats; you got 'em! Now they simply release them back into the community. Deal with it NYC!

This is disturbing. But De Blasio wants to empty Rikers and make it a concentration camp. It is bill A 416 in committee. It is for people who they "suspect" are sick in any way people who are elderly and disabled people who voted for Trump , and people who choose not to get the vax, I want to move but my coop charges 100 k to move and I am flat broke! They bought a judge nothing we can do!
Anyway about A 416 the new commie governor is for it the NYPD is against it,. They are building these camp prisons in Washington state my friend told me they already have them and I have an article somewhere about it they are hiring for them in TN and other states as well. I have articles ad videos about this.

@“Pinky”
Too late, the commits will turn the Bronx Zoo into a Trumpanzee gulag. Silva is in league with them. That’s why he’s talking about closing it down.
Prove me wrong …

One Simple Question.....HOW CAN THEY CLAIM OVER CROWDING WHEN THEY HAVE JAILS ON RIKERS THAT ARE CLOSED?

@"HOW CAN THEY CLAIM OVER CROWDING WHEN THEY HAVE JAILS ON RIKERS THAT ARE CLOSED?"

Really? can you yell louder so we can hear you. Maybe it's got to do with the staffing shortage. Who knows? Anyway, you can fill out a job application form. Use uppercase letters only. They need more people like you there.

If they don't like jail then don't commit the crime.
These are people are the worst of the worst, with long lists of violent felony's.
Not in my neighborhood, through my back yard, window or front door.
Offer them cyanide pills, note a huge number of them don't even belong in this country.
Why must New York City keep inviting the worlds criminals and freeloaders. This sanctuary city shits got to go.
Screw these democrats communists out to destroy the city and re-build as another Soviet Union.
Vote Sliwa or face doom and huge property loss.

Send this to every democrat!