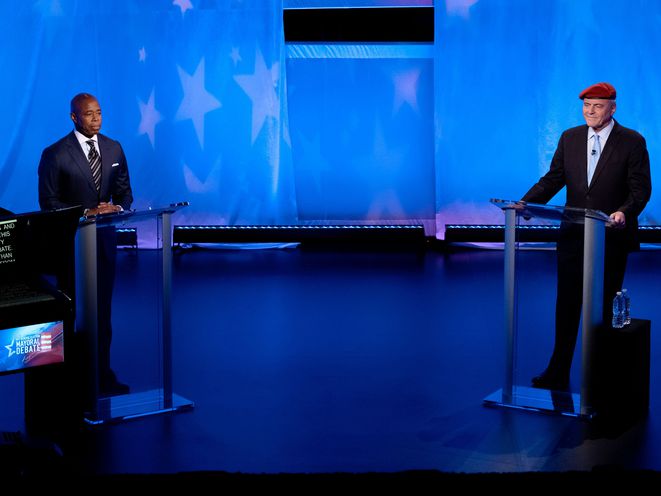 The two men running to become New York City's next mayor faced off in their first debate Wednesday night, a relatively calm affair after some mild drama before the event.

Republican nominee Curtis Sliwa, the founder of the 1970s-era Guardian Angels anti-crime patrol, told NBC New York as he was heading into the debate that his opponent, Eric Adams, called him the "Donald Trump of New York," which he said showed a lack of civility.

Sliwa also said that the Democratic nominee and mayoral frontrunner refused to shake his hand when the two were almost right next to each other earlier in the day in East Harlem.

Once the debate began, the two men offered starkly different visions about how to lead the nation's largest city out of the pandemic, improve public safety and gird the city of 8.8 million people for more powerful storms driven by climate change.

Democratic Mayoral candidate Eric Adams says that he supports Mayor de Blasio's vaccine mandates for city workers but would have gone about the implementation differently.

The first topic was the city's new vaccine mandate, with Adams saying that Mayor Bill de Blasio was correct to mandate vaccination for city workers. He went on to say that as mayor he would work with union leaders and members to come to an agreement regarding the mandate. Adams also said he would uphold the decision to bench any NYPD officers or FDNY firefighters who refused to get vaccinated.

Sliwa disagreed, saying that the city doesn't "have enough police officers as it is." He also touted multiple times that he would hire thousands of more police officers in an effort to address public safety, using a new property tax on Madison Square Garden, Columbia University and NYU to fund the 3,000 more cops — a plan he said Andrew Yang championed, and was done in the 1990s by then-mayor David Dinkins.

Republican Mayoral Candidate Curtis Sliwa is against the current mayor's vaccine mandate for city workers, including NYPD and FDNY.

Adams retorted that Sliwa "made up crimes so he could be likeable," referring to an incident in which Sliwa lied about his own kidnapping in the 1980s. The candidate then hailed his own public safety initiative, where he said he will support the police — but only to a point.

"Public safety is the prerequisite to prosperity," Adams said. "I will have the backs of my police officers, but that covenant if you decide to undermine the nobility of public protection, you will not serve in my department. We're not going to see disorder in my city."

The two then had somewhat similar notions of bringing back a toned-down version of the controversial police tactic known as stop-and-frisk, with Sliwa supporting its use in areas with more gang activity. Adams said he has called for "appropriate police tactics," with a new anti-gun unit to focus on gangs and guns using "precision policing, but also precision resources."

Democratic Mayoral candidate Eric Adams says there will be no disorder in the city should he be elected.

There weren't many heated moments during the debate, but one of the livelier moments came as Sliwa attacked Adams for saying he would carry a gun, saying that sends the message of "do as I say, not as I do."

Adams chose not address the barb, a strategy he has used throughout the campaign and continued for most of the debate, repeatedly dismissing Sliwa while refusing the opportunity to respond to an extended, rapid-fire critique from his opponent.

Since NBC is being selfish, here's the whole thing.

More cops? Does that mean the city has to buy more I-phones for them to stare at?
Dunkin Donuts will be happy.

Adams will be somewhat better the DerpBlasio, but a drowned rat could govern the city better than the Derp. But Adams is still too woke and will probably get pushed in a more woke direction. In other words, there is absolutely no reason to trust him on anything.

It's a pity Sliwa has no chance of winning in this one party town.

Sliwa did a lousy job.

After all these years out there he should have learned enough to be more polished and savvy before the camera debating a cardboard cutout like the other guy.

He should have trounced the other suit hands down.

Adams is a grifter. We need Rudy back!

"More cops? Does that mean the city has to buy more I-phones for them to stare at?
Dunkin Donuts will be happy. "

You cop hating liberal commie, who are you going to call when someone robs your grandmother's purse ?

More cops? Does that mean the city has to buy more I-phones for them to stare at?
Dunkin Donuts will be happy.

Not happy with your taxpayer financed bike lanes? Or you like to commit crimes and the cops are preventing you to do so?
You sound like a Build Back Better Agenda 21 clown.

Adams was so dull looks like he took a hundred xanax......we moved out of sunnyside queens 5 years ago with a stray rescue cat..., and i was i could illegally vote for Curtis today.

If Curtiss doesnt win they cheated! I never voted in a local thing before. I am this time just in case there is a chance it will be a fair election. Vote no on prop 1,3 and 4 written by progressive NY Dems. Vote no to stop partisan redistricting and voter fraud!

It's a pity Sliwa has no chance of winning in this one party town.

Yes, so ve can all goose step down Fifth Avenue in our red berets. Heil Sliwa!

What talking.
The socialist moderators picked by the media wouldn't let Sliwa talk or finish anything. Sliwa need lessons from Trump on how to deal with communists.
Im voting Sliwa.

Does that mean the city has to buy more I-phones for them to stare at?
Not for Cops, the Sec 8 Brats, drug addicts and drunks(substance abuse mentally disabled) get the free phones and 30 Gigs a month free data. ...allegedly for kids to do homework and text the drug dealers.
Socialism at work !!
.

Are you an Anti-Semite ?

Sliwa's not bad, but NYC should have a mayor who graduated college. Adams has a 4-year from John Jay.

There are no winners here. Only losers. The losers are everyone who lives in NYC.
Make the move out.
Peace,good luck.

Both of them are soft on car criminals.

This November. New York must either vote for People first or Politician first. The one who will put people first is Curtis Sliwa.

@Julie B LOL...
How about all the "College Brainwashed" people who voted deBozio & Boe Hiden into office? Without them, no debozio, no Boe Hiden.

Wat mean? ZOG is a simple reality, obvious to all.

Curtiss has a track record of helping the city! There are many educated communists but their education only benefits them not others! Curtiss is not a communist and doesn't discriminate against anyones race! He is a real New Yorker!

@"There are no winners here. Only losers. The losers are everyone who lives in NYC.
Make the move out."

Move out yourself you George Soros Commie.

No SEERofZOG is's some commie loser who just got out of a mental institution somewhere down south.
He picked up his ZOG from his fellow Q-Anon fruitcakes.

Anonymous said...
What talking.
The socialist moderators picked by the media wouldn't let Sliwa talk or finish anything. Sliwa need lessons from Trump on how to deal with communists.
Im voting Sliwa.

Actually, if Trump did know how to deal with Commies he'd still be in the White House today. Letting them run amok for 4 years is why this nation has become a banana republic these days.

Adams has a 4-year from John Jay?
Impossible unless it was handed to him or he had special treatment.
Adams cant even talk, speaks like he got a 12 year Highschool education by repeating the 3rd grade four times!
No way can this guy run the city or even understand all the legal documents and things involved.
We better get SLIWA some law & order back or deep shit is coming !!!

Really? What are you? Some kind of communist?
Prove me wrong ...

"Vote no to stop partisan redistricting and voter fraud!"
Yep, Just as Mike Pence said to Kamala Harris at the vice-presidential debate, Democrats can’t win by the rules, so they have to change them.

@“ Democrats can’t win by the rules, so they have to change them.”

Says someone who cry’s like a snowflake just because TrumpTurd couldn’t cheat his way to a second term.

“@ Letting them run amok for 4 years is why this nation has become a banana republic these days.”
Trumpanzees love bananas.

Says someone who cry’s like a snowflake just because TrumpTurd couldn’t cheat his way to a second term.

With 81 million votes Bidet Turd couldn't be cheated out of anything. now you have the whole world screaming FJB, Let's go Brandon. Really popular.
Even more popular than Hildabeast.
How is your knowledge about Durham and his indictments?

Yep. Punk here is too young and too stupid, but back in the 1920's when "they" transformed Russia into Soviet Union they had the equivalent of the Q crap iover there.
Really stupid crap, but hey the commies only have one play in their book.
The birth of Soviet communism coincided with - the Spanish Flu pandemic.
Pure coincidence, right?

@“ Yep. Punk here is too young and too stupid, ”
Is that you Clint?