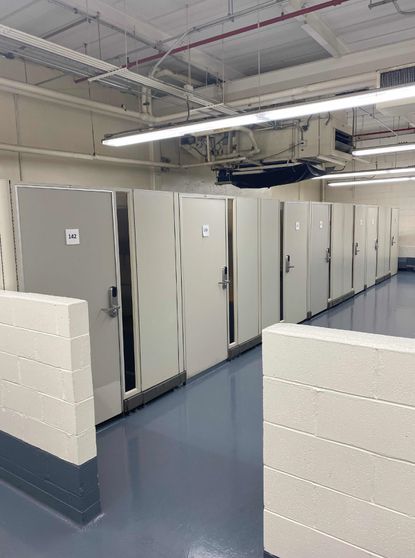 This is how New York City thanks them for their service.

Cramped cubicles, a leaky ceiling, and a community bathroom. That’s not what homeless veterans — who were promised sanitary, private accommodations to keep COVID at bay — were expecting when they moved into their new city shelter on Wednesday.

On Tuesday, the city began moving Allah and other homeless vets out of hotels — where they were placed at the beginning of the pandemic — and into the Borden Avenue Veterans Residence, a men’s shelter in Long Island City, Queens, tucked behind a cooking oil warehouse and the Pulaski Bridge.

Allah, who was transferred out of a Howard Johnson’s hotel in Dutch Kills, Queens was among those promised a private room at the new shelter. With multiple heart problems and severe asthma, he’s at a high risk of hospitalization and death if he contracts COVID-19.

But the army vet told The News that his room looks like a public bathroom stall, with partitions that don’t touch the ceilings and allow for free airflow between sleeping areas. A tarp keeps water from dripping onto his head and electrical outlets in the cubicles don’t work, Allah said. He’s been charging his phone at a nearby subway station.

Let's face it, refugees, illegals and prisoners get treated better than any citizen ever does. You're better off going to jail in most cases than being homeless. Atleast the jailbirds get tv and get to riot about THEIR "human rights" and it will make the news headlines and all of the activists will be out marching for your "human rights". This country has gone mad and very backwards.

“Really, we’ve been shafted”
Yes we all have been, but some refuse to open their eyes !
Its amazing these politicians can sleep at night. God is watching everyone, be safe.

Borden Avenue "Residence" is a shithole and has been a shithole for years...

Nothing this asswipe of a Mayor does surprises me..

Lets hope these guys teach a valuable lesson for future generations. Don't go fighting rich mans wars. From Vietnam to Iraq, the only freedoms they were protecting were the freedoms of the rich to get richer.
At least Biden got out of Afghanistan instead of dragging it out for a few more decades. It may not have been very well executed, but in the long run it was the right move.

The sooner the Democrats or Working Family party come up with someone to run against this Right Wing Nut, the better.

But if they were illegal they would be given 15 thousand a piece and a home and welfare for life! Total disrespect to our heroes!

I'm sure Afghan "refugees" will get much nicer digs.

They deserve better. But it needs more money
Don’t think of raising my taxes though.

Taxes and vaxes are for communists.

Pinky you're way outside the box on this one. Get real.

Where is Dept. of Veterans Services (DVS) Commissioner Hendon in all this?

He talks a good game but like all the rest, he's too worried about keeping his job in the next administration. Not gonna happen shitbag...