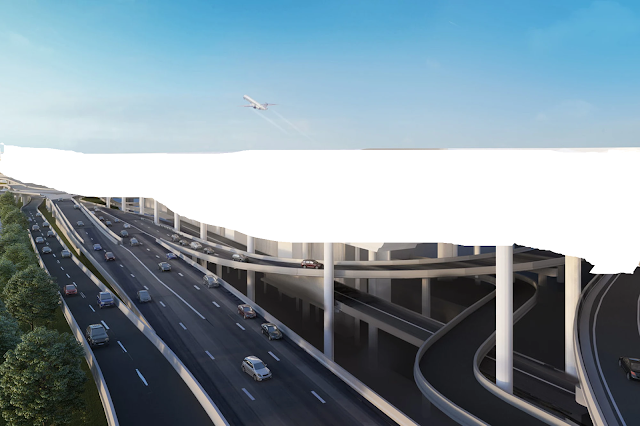 “I have asked the Port Authority to thoroughly examine alternative mass transit solutions for reducing car traffic and increasing connectivity to LaGuardia Airport,” Hochul said in a statement Monday afternoon — hours before elected officials representing the impacted section of Queens were set to hold a press conference against the boondoggle.

“We must ensure that our transportation projects are bold, visionary, and serve the needs of New Yorkers,” Hochul said. “I remain committed to working expeditiously to rebuild our infrastructure for the 21st century and to create jobs – not just at LaGuardia, but at all of our airports and transit hubs across New York.”

“I don’t feel obligated to accept what I have inherited,” Hochul added later Monday at a press conference in Brooklyn. “There were alternatives on the table that even the FAA said that people were saying people were not looking at as close as they should.”

This is the SECOND good thing she's done (the first was kicking out Cuomigula's head of Financial Services...

So Mein Hochul had made one smart move in her Goobernership. Balance that against dozens of idiot moves, tyrannical moves, pandering moves, etc. etc. and the scale still tips dramatically toward "Worse than Cuomo," which would seem impossible, but here we are. Of course, no one could ever be worse than Mayor DeStupio, so Mein Hocul will always have somebody she can look down on.

Remember that Waterfront Trolley between Brooklyn and Astoria?

How about extending the Ditmars train - only a few Astoria blocks are affected and now Astoria Civic is defunct and their new pols only care about wokeness there is a green light.

It was a very stupid idea, round peg solution for a square hole problem. Useless for those in the city and useless for Long Island as it only would connect one of the train lines.

This is the SECOND good thing she's done (the first was kicking out Cuomigula's head of
Financial Services...

BS, she needs the money for something else and her "trusted" people in key positions.
Screw the Air Train, put bike lanes everywhere so commies can use scooters and e-bikes with their luggage.

Extend an LIRR spur to MacArthur in Islip... Express service in 65 minutes to Penn. LaGuardia is an overcrowded shit-pit, let it revert to a regional carrier destination.

The Terminal B Boys ain’t gonna like it that a broad is shutting down their gravy train. They don’t like broads to begin with

There is a LIRR branch at McArthur, it's called Ronkonkama. Of course it's at the back end of the airport and not near the terminal, so shuttle bus it is.

@ last anon- yeah but that option just bloze. It couldn't be too expensive to run a mile or so of track into the damn terminal, making It the only "one-seat ride" from airplane to Manhattan in the Tri-state area. Friggin ISTANBUL has a really nice subway from downtown to Ataturk airport.

@“ BS, she needs the money for something else and her "trusted" people in key positions.
Screw the Air Train, put bike lanes everywhere so commies can use scooters and e-bikes with their luggage.”

So says another clueless pinko communist.

This is almost funny. Anyone who thought about it for 10 seconds could see that the LGA train was a useless waste of money. But while what's his name was governor, everybody kissed his ass. Now that he's gone, all of sudden it's not such a good idea.

That would be the Port Washington line and its gone to total shit, filthy, always problems especially after ballgame's at junkyard stadium.
Those North Shore rich people use car services, (to LGA around $38) they hate and avoid the MTA at all costs.
The Illegal alien domestic help, babysitters, lawn mower pushers they import from Queens don't go anyplace and don't have ID to board an aircraft.
They wont go near a checkpoint.
Total waste of money, that tram thing from JFK to Howard Beach is always empty or maybe 2 or 3 people.