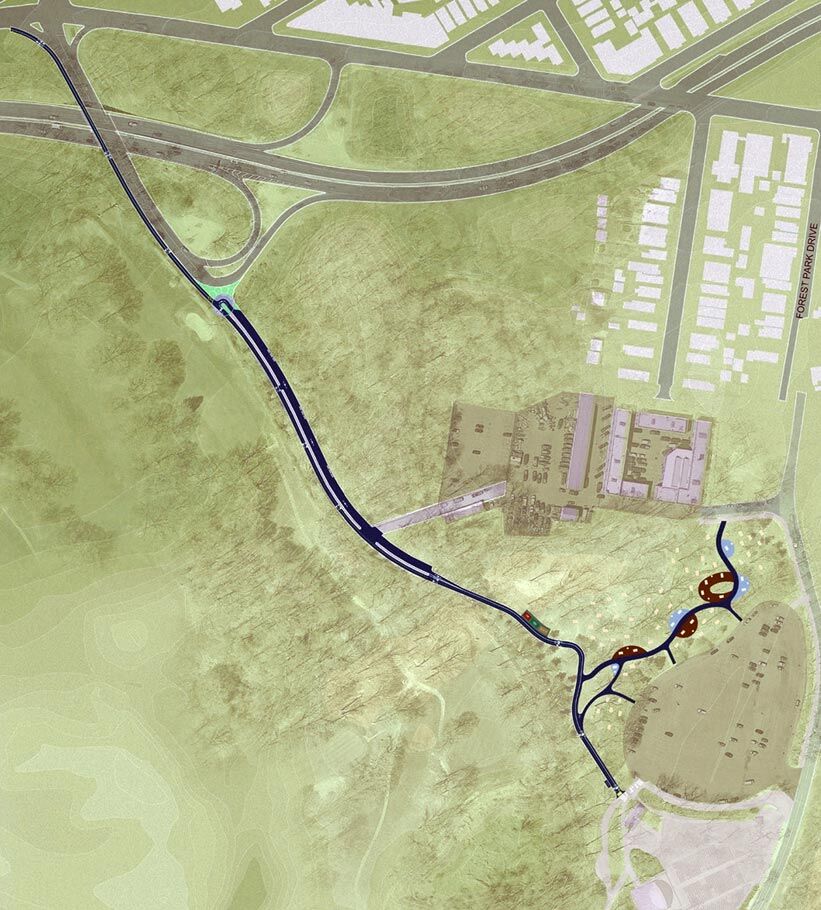 Parts of the west section of Forest Park began to close over the past week as the Parks Department began construction on a pedestrian and bike path connecting Glendale to the side adjacent to Woodhaven.

The nearly $4 million project will create a path that will slice through the section of park just east of the Forest Park Golf Course on the western half of the park from the intersection of Myrtle Avenue and Forest Park Drive to the Seuffert Bandshell Parking Lot.

The Glendale-facing entrance begins along a segment of Forest Park Drive that now functions as an off-ramp for the Jackie Robinson Parkway. The renovation will replace what is now a dirt path worn in the shoulder of the heavily trafficked street with a sidewalk-width road intended to be shared by cyclists and pedestrians.

The design for the path continues past that point along Forest Park Drive to cut south through the park until it connects back to the wooded area behind the bandshell parking lot. The southern section will build off of an unused concrete expanse in the park blocked off to car traffic with a two-pronged path consisting of a wide pedestrian route on one side and a two-way bike path on the other.

The entrance to that wide, dual-purpose path will contain plantings and a seating area and adult fitness equipment further down. The redesign will also provide security lighting along the section of Forest Park Drive.

Residents began to notice the project getting underway when they saw a gate go up around the Forest Park picnic area by the bandshell section of the park. Last Friday afternoon construction crews were on site demarcating the path and clearing debris from the path.

Though the picnic area could be blocked off for a year — the length of time Parks expects the construction to take — the project will also provide new picnic tables, grills and coal bins in the bandshell-adjacent section when it is finished.

The total price tag for the project is $3.93 million, consisting of $1.89 million of discretionary funds contributed by Councilman Bob Holden (D-Middle Village) and his predecessor, Elizabeth Crowley, $1.2 million from the Borough President’s Office and $841,000 from the mayor.

“I’m glad this project is moving forward. Our parks are very precious throughout the city, especially in this district. That’s why I’ve allocated more than $1.3 million to Forest Park for various projects,” Holden said in a statement.

While street safety advocates celebrated the addition of a bike path to improve connections and accessibility between Forest Park and Glendale, they spoke to the larger concern over how difficult it is to safely access other large portions of the park by bike or foot.

“This project should be a model to create bike-friendly entrances from all surrounding neighborhoods, including Woodhaven and Ozone Park,” said Juan Restrepo from Transportation Alternatives in a statement. “With the nearby Jackie Robinson Parkway and Woodhaven Boulevard, Forest Park remains inaccessible to the people the park should serve. NYC DOT must amplify the new bike path by creating a network of protected bike lanes to the park.”

Juan is quite a little Hitler about the streets of NYC. Such an exemplary spokesman for the Transportation Totalitarians.

I totally agree with JQ LLC. What we need here is car lanes through the park, not bike lanes.
Actually why not pave over the whole park and provide more free car storage for the Sheeple.

Ran a nice footrace there with the Hellgate Road Runners in 2010 back when I lived on Crescent Street near 34th. Ahh, yes.... Some good times indeed amidst the bevy of babes in that club... Mmm mmm💞😍😁

"Forest Park remains inaccessible to the people the park should serve."

Forest Park was absolutely, completely "Accessible" before these bike nazis were on the scene.

They all look strange.

Scroll down a bit and take a look at the Board of Directors.

Why do politicians always find money for bike lanes, but they never have money to fix the potholes on our damaged streets?

They have money for bike lanes, but no money for to open community centers for low-income neighborhoods so children and people have a place to go instead of hanging out in the streets?

They don't have money to keep violent homeless people and drug addicts off the streets and fund reform programs and treatment programs for them so they can stop hanging out in the streets and robbing and physically attacking people.

These politicians today only seem to be looking out for special interest groups and not the needs of people who need better services where they live.

Bike lanes are great until it gets dark.

The issue is we have a ton of Hitlers in this country. That’s the scary part.

IMHO Not a bad thing to build this bike path. I drive a car too but avoid riding my bikes on the streets of NYC.

Pedestrians won’t be able to use this pathway, even if it is designated as a pedestrian/bike lane... another dumb idea

@"The issue is we have a ton of Hitlers in this country. That’s the scary part."

I presume you are talking about car drivers.

Where are the gay "let's party" areas?

"I presume you are talking about car drivers. "

He was talking about you bike Nazi.

I drive a car too but avoid riding my bikes on the streets of NYC.

what is the point? You paid for it. At least use it, because Soros soyboy paid nothing for his bike fetish.

"These politicians today only seem to be looking out for special interest groups and not the needs of people who need better services where they live."

Now you starting to understand communism. When "they" done with little propagandist bike Nazi, they will be the first ones to be locked up. He just doesn't know it yet.

@“ He was talking about you bike Nazi.”

Actually, I don’t have a bike.

So there, “car communist”.

“ Now you starting to understand communism. ”

You wouldn’t know a communist even if your comrade Lenin landed on your fat stupid head!

Too bad that the local Right WingNuts are too fat and immobile to enjoy cycling around a park.
Sad.

Advocating for paths for pedestrians and bikes in a PARK makes Juan a "little Hitler"? Because everyone in a car on the Jackie Robinson is surely going to the park....

Besides his recent demagogic statements regarding parking spaces reflects his and his agency's fantasist totalitarian agenda to abolish cars, What makes Juan a little hitler and also an idiot is gripe is his belief that bikers have no real path to access Forest Park when I and every other resident around there is easily able to get inside there whether by Woodhaven Blvd., 80 st, the intersection at Myrtle and Park lane south and Metropolitan and also from Myrtle Ave. in Glendale. I hope Transalt is paying him well.

I presume that Eisenhower was the biggest Hitler of them all then. All those car paths he built across the nation. And don’t forget that activist fascist Robert Moses, steamrolling his car lanes all over the place. I’m sure they were all half empty at first.
You right wing nuts are spoiled little babies.

@JQ LLC
Hitler actually built the highways that influenced Eisenhower to pass the Interstate Highway Act, so aside from the derogatory nature of comparing someone to Hitler, it's also factually a really stupid analogy.

Sounds like you're making an analogy that Ike was a Nazi sympathizer. That's pretty stupid as well.

I guess your parents were nazi sympathizers as well, getting a car to drive you around when you were a kid.

Give my regards to your little Fuhrers Juan and Danny Harris.