God says no to Governor Kathy 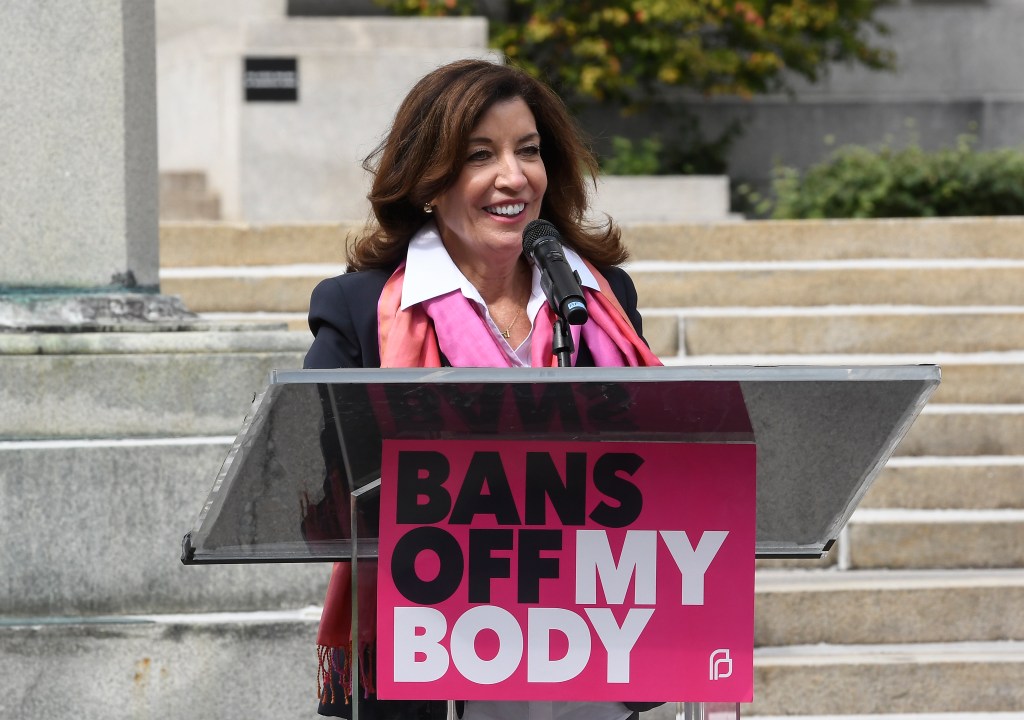 An upstate New York federal judge granted a preliminary injunction against Gov. Kathy Hochul’s COVID-19 vaccine mandate, barring the state Department of Health from enforcing the requirement on healthcare workers who claim religious exemptions while the case is being decided.

“Upon review, plaintiffs have established at this early stage of the litigation that they are likely to succeed on the merits of this constitutional claim,” wrote Utica federal Judge David Hurd Tuesday.

He granted the request in response to a religious-freedom lawsuit filed last month against Hochul, the DOH and Attorney General Letitia James by 17 anonymous healthcare workers — the majority being Catholic — claiming the state’s mandate violated their constitutional rights.

Hurd’s decision extends a temporary restraining order granted shortly after the suit was filed and prohibits employers from citing the state’s mandate to deny exemption requests. It also pauses the DOH’s ability to enforce the rule, or revoke any religious exemptions granted since the mandate took effect on Sept. 27.

I thought the Pope ok'ed the vaccine?

The Pope called getting vaccinated an act of love.

As a member I’ve the “Divine Church of The Tooth Fairy “, I request the freedom to do whatever the hell I want.

Even the propaganda rag the New York Times now admits that (1) vaccines aren't going to save your granny and (2) kids IN NO WAY need them. Plus, there is now ample evidence that the vax causes harm, and possibly very great harm.

So why is Herr Hochul still pushing it? What's the real agenda here behind the vax madness? With Democrats it's always a challenge to tell if they're demonic or just morons. Some are both (like the Late Mayor Wilhelm and Down Low Barry Obama).

She has the same Crazy Nancy Piglosi eye makeup going on. Yuke !

"Even the propaganda rag the New York Times now admits that (1) vaccines aren't going to save your granny and (2) kids IN NO WAY need them.'

where in the NYT does it say this??

The real agenda is to cull the herd my friend.

So The NY Times isn’t fake news when it suits you?

I grant you your religious freedom not to vax. BUT.....quarantine these ignorant boobs in a ghetto. Sequester then from us sane folks. Let them die in peace....FAR AWAY FROM US!
So let it be written. So let it be done!😂😂😂😂

I thought the Pope ok'ed the vaccine?

Along with little boys. The Pope, hahahahaha

As a member I’ve the “Divine Church of The Tooth Fairy “, I request the freedom to do whatever the hell I want.

Go for it. As long as you don't break laws, nobody cares.
If you need to be controlled like the rest of your activist buddies, you have the freedom to move to China.
You see, it works!

where in the NYT does it say this??

Right here. (I refuse to link directly to that rag.)
https://alexberenson.substack.com/p/20-months-in-the-new-york-times-one/comments

Besides which, this is basically all well understood, it is merely censored so the rubes don't know they're being conned.

So The NY Times isn’t fake news when it suits you?

A broken clock is right twice a day, etc. Yes, now and again the Times will slip and go off message. The question really is, is this a trial balloon and maybe the Powers That Be are deciding they need to finally shift away from their cataclysmically terrible Covid policies that have not saved one life and probably killed tens of thousands extra. Certainly the censoring of early treatment options (which continues to this day) has directly killed tens of thousands.

I have to say, you really need to be trying pretty hard to remain ignorant if you still think lockdowns and masks work, or that Das Jab is worth a damn.

BUT.....quarantine these ignorant boobs in a ghetto. Sequester then from us sane folks. Let them die in peace....FAR AWAY FROM US!

Hmmm, yeah, ok Spanky. But fact is that Rona deaths are now HIGHER among the jabbed than the non-jabbed. Gosh!

Suddenly they're worried about fetal cell testing, but it was never a problem when fetal cells were used to develop acetaminophen, albuterol, aspirin, ibuprofen, Tylenol, Pepto Bismol, Tums, Lipitor, Senokot, Motrin, Maalox, Ex-Lax, Benadryl, Sudafed, Preparation H, Claritin, Prilosec, or Zoloft. Have you used/taken any of those products lately? Why don't you admit that your "religious opposition" is just a convenient way of saying you don't want to take it? Religion has nothing to do with it.

@“ As long as you don't break laws, nobody cares.”

The laws of the Divine Tooth Fairy supersede all mortal laws and mandates.

@"As a member I’ve the “Divine Church of The Tooth Fairy “,"

Your church is fake. Here at the Church of the Divine Doofus where we believe everything is fake unless we heard it from an anonymous source on the internet. All lame street news is fake. All right wing anons are not fake. Of course there are loads of reliable news sites to be found on Facebook, YouTube and other anon sources on the internet.
Everything else (except the Divine Doofus itself) is fake, including this post.

Don’t cry for me Argentina. Our guv should be focused on extending the Unemployment Benefits.


Are they also mandated like the "vaccine" (gene therapy jab)?

@Here at the Church of the Divine Doofus

Nobody cares. Move on.

Who are you? The Illuminati ?


@Who are you? The Illuminati ?

TA is paying your for this garbage?

@“TA is paying your for this garbage?”

Kathy told you this or hearing voices in your head?