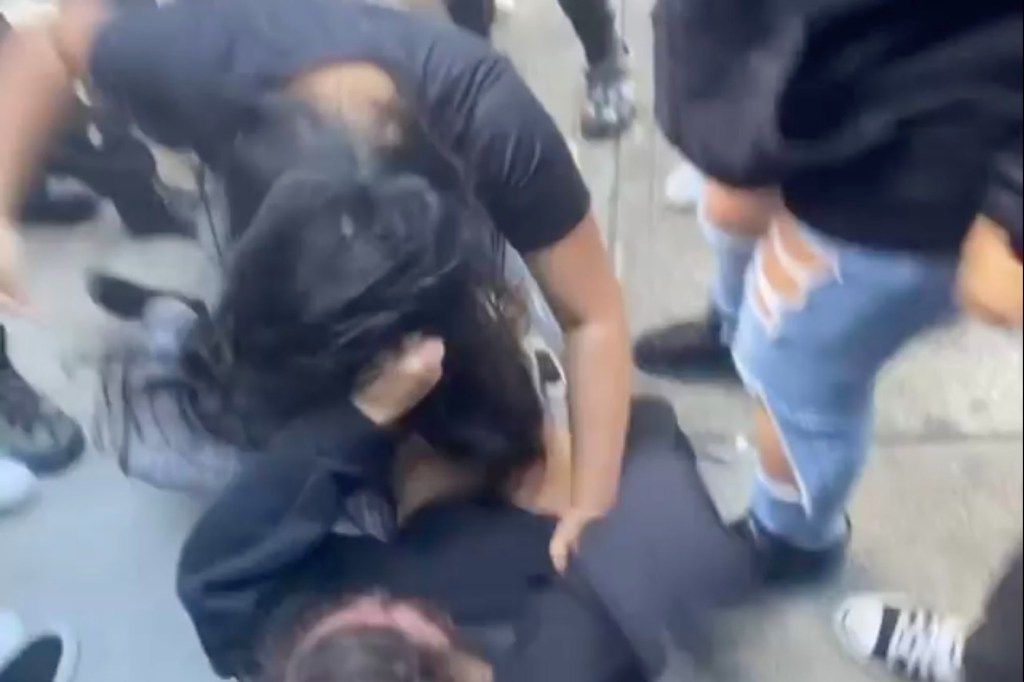 They’re reading, writing, and roughhousing at a highly regarded Queens high school — according to more than a dozen videos of students brawling in hallways, the cafeteria and outside, insiders confirmed.

The 14 clips of wild fistfights at or near Benjamin Cardozo High School on 223rd Street feature both girls and boys. Crowds of noisy classmates surround the combatants, egging them on.

“Fight! Fight!” a boy is heard shouting as two girls face off, before finally swinging at each other in a frenzy.

In one fight close to the nearby playground of PS 213, video shows a teen thrown to the ground, trying to shield his head from further kicks and blows.

Footage in front of shops on Springfield Avenue near Horace Harding Expressway shows a boy knocked flat onto his back, motionless.

Fight videos were taken down from the Instagram account @cardozohighschoolfights after The Post asked the NYPD about them. Two showing fights that happened off-site remain online, including one warning of “graphic or violent content.”

“We are actively looking into the incidents,” said NYPD spokeswoman Sgt. Jessica McRorie, citing five complaints of violence in or near Cardozo since Sept. 13, when classes began.

In one case, a student menaced another kid with a Taser, though no arrests were made, she added.

In most cases, the fights were “handled administratively,” a source with knowledge of the videos told The Post, referring to school officials.

Cardoza class of '78. Never had an issue or seen a fight.

The worst Mayor ever

There are no consequences for ones actions. The public schools are unable to punish anyone for bad behavior.
We've become a society that rewards bad behavior. We idolize drug dealers, murderers and thugs. We are doomed as a society going forward. We elect politicians who are convicted of crimes.

Hard work is frowned upon and scamming the system is celebrated.

@“Save the Children”
Save them by keeping idiots like you away from them.

At least they’re not snowflakes like the baby boomer generation.

Funny! Why, what did you think happened in public high schools? Learning??? Ha ah ahhahha!!!

They are simply daytime penitentiaries for the worthless riff-raff that form the youths population. And now they are getting rid of the G&T programs (no, not Gin and Tonic) which were the only refugee for the thin slice of intelligent kids left in the system (shhhhh, nearly all Asians and whites, but don't say that!).

The fact is that after decades of woke-ism, we have a society that cuddles and coddles the stupidest among us. Everything worthwhile is ruined so that the dolt population can feel good about theyselves. (Pssstt... here's a hint. The stupidest kids have the HIGHEST self-esteem.) The smart kids -- you know, the ones that actually ARE the future amidst all the malarkey about "kids are the future!" -- are left to rot.

Hey, you think China is sacrificing their best for the faux self-esteem of their worst? Hahahahah!!! That's why they're going to bury us. Sure, China has a lot of problems, but cultural suicide isn't one of them. That's our jam.

China went through their cultural suicide already. Starting with the British dumping Opium on them early on, and then Japan's murderous genocide against them. Mao stopped the Opium dealers with rifles and brick walls, the good ol' U.S.A. stopped Japan with the "A" bomb and the lives of many American soldiers, sailors and marines. Every nation reaches its apex and then implodes, now it's our turn. Are you ready?

"population" of students er, changed, since new lines were drawn--school was deemed "too white". This is the result of the new student population.

These worthless sub 85 IQ delinquents should be digging ditches. Prove me wrong.

They should. But in the end they will be the politicians who continue to dig this nation's grave.