Homeless to be removed from E train 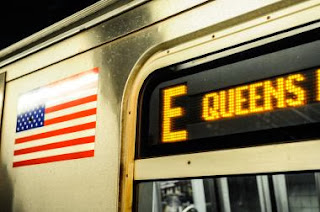 The NYPD and the MTA plan to clear homeless men and women out of the subway system after a skyrocketing number of people have sought shelter there from the brutally cold winter, police officials said.

The plan, which is set to begin before dawn on Monday, comes amid an upswing in homeless people in the subway system during the exceptionally cold winter. There were more than 1,800 people living on the subways in 2013, up from 1,000 in 2009, according to the city's annual HopeNYC street survey.

Starting Monday at 3 a.m., teams of transit workers, NYPD officers and emergency medical technicians will go to the E train stations at Jamaica Center and at the World Trade Center, officials said.

Each time a train pulls into one of the two stations, teams will check each car, and take all the homeless people inside to either a shelter or hospitals, officials said.

The trains will then be cleaned for the morning rush hour.
Posted by Queens Crapper at 12:06 AM

What took them so long to act on this major problem?

Yea good luck with that one. Homeless people refuse to go to shelters. They will be right back on the subway again once they get up the money for it.

at least these trains are affordable to live in.

It is about time. Why should the actual tax payers who help pay for the MTA have to see the subway stations and the subway cars being used as some homeless roach motel and then endure not only the disgusting sight of a filthy homeless person and their crappy belongings but the horrible stench that fills the subway cars.

It is so obvious: when the City raises real estate taxes, landlords pass on the increase to the tenants and making rent less affordable, thus driving more people to homelessness.

"Each time a train pulls into one of the two stations, teams will check each car, and take all the homeless people inside to either a shelter or hospitals, officials said."


and take all the homeless people inside to either a shelter or hospital...

How do you determine who is "homeless" ?

Police or mta workers gets on train. They conclude that person A is homeless because of a few extra bags but in actuality they are not. They attempt to pull the person out the train, the person resists and is ultimately arrested.

Case gets thrown out before arraignment or after a few appearances in court. Bam lawsuit, thanks NYPD/MTA.

Just tell me so I can plan for it, how many extra hours I have to work to make the homeless comfortable and content, and how much to handle the government's overhead in delivering Section 8, EBT, and Medicaid to them?

It's about money. I have earned it. They want it. The government takes it.

What a bullshit temporary fix. The homeless need a lot more than a night at a filthy, dangerous NYC shelter

They won't STAY in shelters. These are the lunatic fringe people and/or deeply drug-addicted who will roam the subways in filth even if you gave them a $1 million. Removing them is all you can do.

Watch some liberal bleeding heart lawyer come out of the woods and sue the city for infringing on the rights and freedoms of these homeless people.

This morning, worried the doors were about to close, I accidentally got in a car with a bum at each end-- oops! homeless person. The stench was overpowering. Plenty of seats, tho'. I quickly went into the next car-- no seats. I wonder why the E train is so popular with such people.

If I'm not mistaken, the E train is the longest route that runs completely underground, so the temperature remains constant, no sun glare, and the time between "sweeps" at the end of the line takes longer - so it has always been the most popular line for the homeless.

Yeah, that E-train is definitely the bum-express.

Experienced riders know what an empty or close to empty car contains. The look of surpriseby the tourists is priceless though.

i for one cannot wait until they get this filth off the trains. i take the e train to work everyday between 4-5am and it is one huge dumping ground for this garbage. i am very careful not to let any part of me (except the bottom of my shoes) touch any surface on the train.

Shutter the top heavy Dept of Homeless Services because it has a vested interest in keeping people homeless. Homeless people in scatter site housing and filthy dangerous shelters are their bread and butter.

The few agencies like Common Ground that do a great job of housing wounded homeless people are too few and far between.

NYC Department of Homeless Services DHS is the problem. This was established by a Republican Mayor and his administration.

Many of the homeless are developmentally disabled who have never been diagnosed or have Traumatic Brain Injury -TBI. There are homeless seniors with dementia and Alzheimer's who are not receiving the government benefits that they are entitled to, that would allow them to pay rent.

Take the horrible black man who wears a do rag off the A train from Hoyt Schmerhorn to Mott Avenue. He openly sells pot, cigarettes, alcohol, pirated dvd's and child pornography after about 9pm each evening on this subway line. If you want to haul someone off the train, he's the best one you can take out of a subway.

I say yes to really helping homeless people, not criminalizing them. They have enough problems as it is.

In NYC We did not see armies of homeless until Ronald Reagan became US president. In 1980 Rudy Guilaini as part of the Republican agenda, made it extremely difficult for NY'ers to access government benefits.

Stop scapegoating the vulnerable. This is like putting a band aid on a broken leg.

Yes, they need to get off their lazy bum ass and get a friggin jop like the decent people do.

Living your live off the teat of the American taxpayer then crying that your life is hard is crap.

Grow Up.
Grow some.
Get a Job.
Get off our backs.

A)That is 100% a lie. NYC had a MAJOR problem starting with the Administration of John Lindsey (R in name only) but it's not about either party, that is a lie advanced by people who are haters and have zero ability to solve anything.

B)Because of the “Great Society” of liberal President LBJ welfare, food stamps and free Section 8 housing were handed out to families, so the bums could be tossed to the curb which is why the NYC (so-called) Homeless population grew so large in the 1970’s. Bums were dismissed by their families who demand our cash and also demand we accept there crappy family member.

C)Another huge reason for the huge growth in the (so-called) Homeless population grew so large in the 1970’s was because in 1972 Geraldo Rivera presented his excellent work on the story of the horrible treatment of the mentally ill at Willow Brook. It took some years later but almost 100% of Mental Health Facilities in the US were closed as a result. These Mental Health Facilities across the US were shut down by liberal uber-loons who promised that small neighborhood mental health facilities would replace them. Sadly there are few such facilities because the Lear Jet Liberals don't want them in their neighborhoods.

D)Another huge reason for the growth in the homeless population since the 1970’s is the insistence of the uber-loons in calling a drug addict, a drunkard, a wife beater, a criminal in hiding, a battered women, a mentally ill person all as the exact same “Homeless”, sure..they are also Lear-Jetless why not just call them as they are so that we can BEGIN to actually solve problems.

E)Go ahead…..blame it on Reagan so that you can go on with your life as if you were part of a solution. (You’re not, you’re a moron).

YES! I've been riding the E train to work twice a day for three years and it is so, so bad. Sometimes if a particularly bad smelling person is in a car the entire car becomes unusable because the smell is so overpowering. I once had a cockroach fly through my hair that had apparently caught a ride onto the E from a guys shopping cart. Exactly the kind of pick me up you need at 5 in the morning. On the one hand I know it's cold out there and I feel for them, but on the other it really effects the commute horribly. It's not like the pick one car to sort of hang out in either, they spread throughout the entire train.

Since when do cockroaches fly?

Oh yes, we do have palmetto bugs up here in NYC. AKA cockroaches that fly.

just by the way, the 5am e train out of kew gardens was the same filth laden train it's always been. kudos to the nypd and the mta for their stellar work.