You know folks, it takes some special talent to keep coming up with vibrant and diverse pieces of Queens Crap. And Frank Lloyd Crap has such talent. 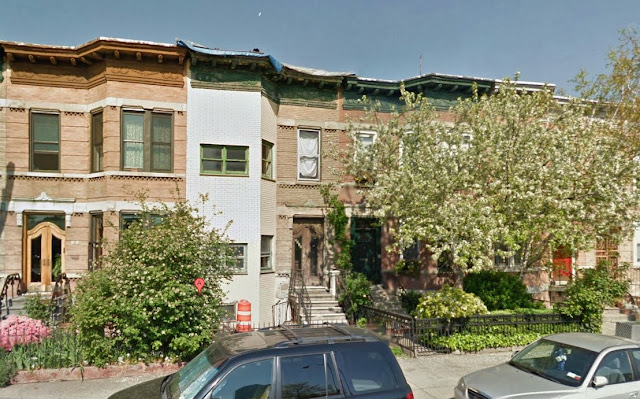 We had the chance to chat about some recent mentoring that Frank had undertaken. The project above, at 45-12 11th Street in LIC had been crappified by a young member of the Queens AIA. However, it just wasn't crappy enough. Until Frank got involved, that is!

"It was missing that special pizzazz," Frank said. "It just didn't disrupt the streetscape enough. If you want silly yuppies to think they're living in an avant garde piece of architecture, you can't just get by with a slightly out-of-character alteration," he explained. "I worked closely with the novice for a while and we came up with this." 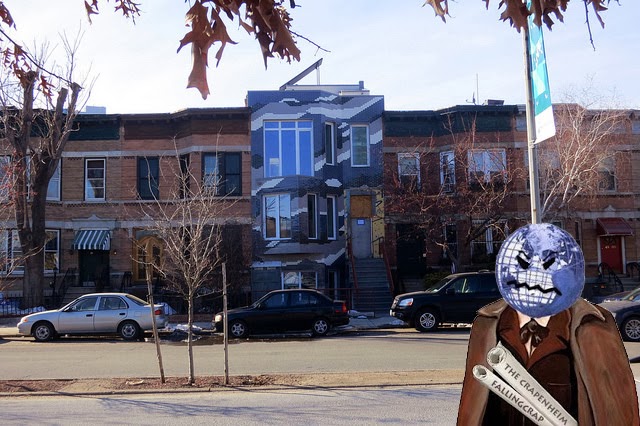 "It's important to not only have an ostentatious design, but also to get creative with the reasons why you are undertaking crappification. I settled on, 'RAISE LOWEST FLOOR LEVEL OF EXISTING BUILDING ABOVE THE FLOOD PLAIN.' Of course, considering the damage wreaked by Sandy in this very community, raising the building up is common sense that the DOB can't refuse." 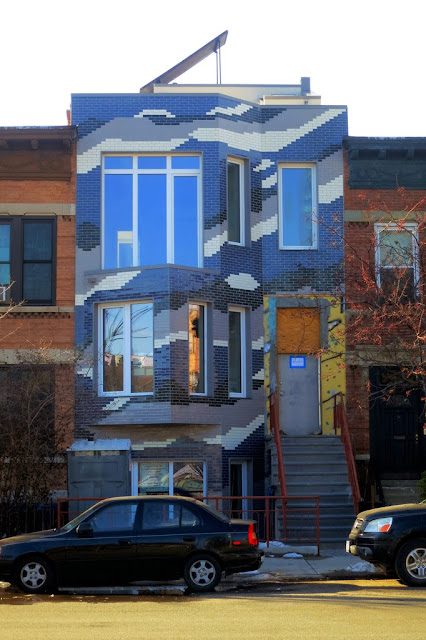 I suppose we'll just ignore the fact that there is still an apartment in the basement that is very much within the flood plain.

Photos of "Lego Building" from New York Shitty.
Posted by Queens Crapper at 12:46 AM

Biggest crap in Queens! I don't know how this crap was approved by the DOB. 1. If it is in the flood zone, the basement should not be habitable. 2. the front stairs which destroys the streetscape is not a permitted obstruction in the front yard. also exterior stair should be 10' away front any interior lot line. 3. the air shaft in the middle shall be considered a inner court which is against the zoning regulation.

They left equipment on the roof for tenants to hang themselves. Just another amenity...

Wow....how our of place! That looks terrible..... anything to cater to yuppies and foreigners Huh?

That is so crappy and stupid looking on that block. I feel sorry for the neighbors.

Queens Crap has out crapped itself.

We have either low-class third world shit or so-called yuppie pretentious shit. Either one destroys the esthetics of blocks and communities.

I have never seen a city that just allows whatever. It is like they just gave up. But the bottom line is greed, corruption, and incompetency in this so-called "greatest city in the world".

Ahahaha this is awesome! 5pointz lives on! Ahahahaha!

Time to step your game up, Queenslings, it's not 1938 anymore. Your brown-brick plaster rookeries won't last forever. Bring on the crap!

Compared to the awful tacky renovations some Greek, Indian and Italians do like Stucco/Faux stone/Vinyl siding facades, out of context columns, ugly marble fences, random ugly statues and bright ugly paving stones. I'm sure the DOB didn't approve all of that. Queens didn't become a Vinyl covered waste-land because of "low-class third world immigrant", that was there from before. Can we please make those disgusting glass with gold/silver metal awnings and fences illegal.

DOB does not comment/approve for asthetic issues.

They check railing, for instance, for height, structural stability, etc. but not for color, finish, or material.

same for brick. So long as the material meets fire ratings and is installed in an approved manner of assembly (mortar, tiebacks, etc), they can give a rats ass what color the bricks are.

One one hand, its unortunate, because ugly shiat like this gets built. But on the other hand, DOB giving approval for things like paint colors would be an overstep of government intrusion of property rights.

If you want to be able to tell your neighbor what color stucco to use, move into a historic district, or move to the suburbs with a nice HOA.

I firmly believe that capital punishment should be instituted for bad architecture. And, in a perfect world, I would King with the power to determine what is tastful and what is not. I pity the all of the vile architects responsible for the trash in Astoria the day I become King.

This was my family home of over 4 generations and over 90 years and it is sad to see it left as such an eyesore for the entire neighborhood. Not one original detail from the 1906 house was left in tact including the granite fireplaces, chandeliers, iron gate, Mahogany doors or stainless glass windows. What a sad sight to see. It would have been impossible to make the structure worse, but somehow the new architects and builders managed.