I've been pondering the whole Newtown Creek boathouse debacle and wondering why the City Parks Foundation has been pushing so hard for the project and how it leapfrogged over more popular projects as voted on by stakeholders back in 2011. Well, the dots have been connected.

The choice of the City Parks Foundation to oversee the whole community outreach process for the wastewater treatment plant settlement was a joke, since they are part of the Parks Department. They may say, "City Parks Foundation is the only independent, nonprofit organization to offer programs in parks throughout the five boroughs of New York City," however, all of their employees have "parks.nyc.gov" e-mail addresses. The CPF is a 501c3 that allows Parks to accept tax deductible donations. They should not be involved in any decision making or vote collecting process regarding how the settlement money is spent. Why? Because, as the WSJ explains: "the money comes from $10 million in fines levied against the city for failing to meet deadlines in constructing a new treatment plant and in lowering the level of pollutants in the water". The City is overseeing where the fines it paid will be spent? Hello, conflict of interest.

Open Space Alliance of North Brooklyn is a multi-park conservancy authorized by the NYC Dept of Parks. (The OSA Director is also the Parks Department's North Brooklyn administrator - a Parks employee.) OSA's purpose is to raise private money for public parks in northern Brooklyn. But strangely, it’s accepting donations on behalf of this private boat club. OSA even went so far as to apply for funding for the boat club from the Exxon settlement money.

The boathouse project went from 3rd on the list to 1st on the list after the vote. Is this because DEC determined that it's what people in the area really wanted, or because "Commodore" Dewey Thompson, the president of the boat club, is a board member of OSA, which is affiliated with the Parks Dept, as well as a board member of GWAPP? (GWAPP applied for the sewage treatment plant money on behalf of the boathouse.) Conflict of interest #3.

Conflict of interest #4? How about the fact that the project submitted to the DEC and to the public is nowhere near the same as the one being pushed now? Don't we deserve to see the plans? (Interestingly, I hear that some of the board members of the groups behind this endeavor have not been allowed access to the plans.) Perhaps there should be a revote? Or was the result of all this "community input" pre-determined, with the necessary steps taken after the vote to ensure that the outcome looked legitimate?

And then there's Newtown Creek Alliance:

And here are the reasons why they support it:

2) Eyes on the Creek: Dozens of pollution investigations and enforcement actions against Newtown Creek polluters have been set-in motion as a result of the first-hand observations and vigilance of concerned local residents. Waterfront and water access results in more “Eyes on the Creek”, which will ultimately lead to a safer, less polluted Newtown Creek.

3) Education: There is nothing quite like being on the water itself to inspire curiosity about the multifaceted history of the Creek and wonder at the innumerable life forms that call Newtown Creek home. Over the past two years, NBBC has introduced hundreds of people to Newtown Creek for the first time. A permanent home for NBBC that includes an education center will help build a well informed constituency for the Creek that cares about it’s future.

4) Water Quality: How the public uses a waterway informs how clean the government requires it to be. That is to say, if people are swimming in the water, then that body of water must be cleaner than one that is simply used by ships for navigating from point A to point B. Currently, Newtown Creek is misclassified with the lowest water quality designation, a classification that belies the fact that people boat and fish on Newtown Creek. It is our hope that the growing presence of human powered watercraft on Newtown Creek, enabled by a NBBC that teaches safe boating, will force a reclassification of Newtown Creek’s water quality designation so it reflects its actual use as a recreational waterway.

Hmmm... They forgot to mention reason number 5, as revealed by the NY Times:


There are also discussions to include office space for Riverkeeper and the Newtown Creek Alliance, nonprofit organizations working in the area.(inside the boathouse/hotel)

Pushing "4) Water quality" when the public has been warned to stay the hell off the Superfund site, doesn't seem very responsible to me. But I am not a member of this group. I was asked many years ago to join, but I got a bad vibe from the people trying to recruit me, and I declined. Always trust your tweeding radar, folks.

I really have to wonder how the 2 men who are responsible for creating this monster - then Attorney General and now Governor Andrew Cuomo, and current Attorney General Eric Schneiderman - are allowing this to continue. And Bill DeBlasio, who is anti-conservancy for reasons perfectly illustrated by this situation...how about you? Public Advocate Letitia James? Anyone?

How about Queens elected officials whose constituents were disenfranchised by this process? Van Bramer? Crowley?

Assembly Member Joe Lentol and Council Member Steve Levin: You've been listed as "sponsors" of this boathouse. Are you supportive of the way this process has been carried out? You've been eerily quiet about the whole controversy. Of course, a member of the press would have actually had to ask you about it. Speaking of which... WHERE THE HELL IS THE PRESS? Specifically, the BROOKLYN PRESS? 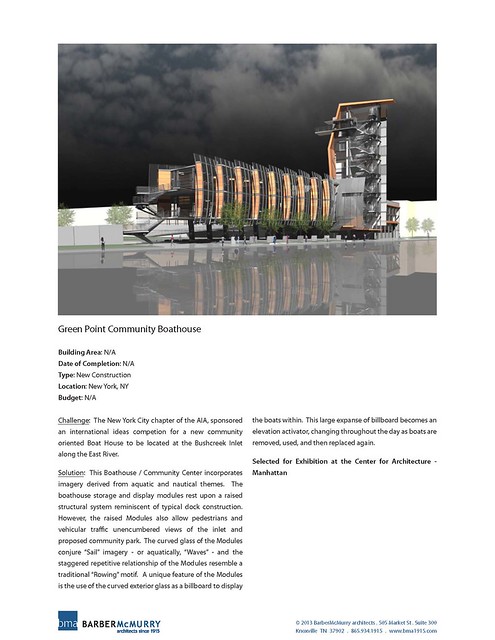 Meanwhile, Miss Heather has been told that the above rendering is that of the boathouse. A tipster told her that it actually is 10 years old. Amazing that this has been going on for so long. You'd think that they'd be working out of more than just shipping containers by now if they had the community support that they claim to have.

This whole process really does stink. There's even a guy who does wilderness training at the boat club privately. How is this kosher?

Such a small group of well connected people influencing the spending of millions of dollars that was supposed to benefit the entire community. This really does seem like the Boss Tweed era all over again. This is what the Bloomberg administration brought us. Sadly, despite all the rhetoric, I don't see DeBlasio doing a thing about it.

Hello, you are uninformed (in red text)! and PS, that boathouse drawing you posted has no relation to the boathouse you are writing about, even though it looks fancy for your blog... That is just some architect's fanciful drawing for a contest, for their own purposes, doy.

I am uninformed about conflicts of interest? Do tell. It seems more likely that I have hit the nail on the head. I also mentioned that a tipster told Heather that the drawings were 10 years old and linked to Heather's post saying that it was for a contest, doy. Methinks you do protest too much.

What's the big deal about revealing the plans, dear boathouse defender? It certainly would put a lot of the rumors to rest.

would be so kind as to share these plans with the general public? Or better yet--- perhaps our elected will come out of hiding an acknowledge there is a problem here?

The Blaz has learned well from his false neo-progressive mentors(the Clintons,gov.Cuomo II,President Dronebama Obama).Since this bullshit project is another farce to exploit green causes for monetary gain(an inconvenient truth turned into a convenient windfall for another mentor-Gore),and everyone involved gave the new mayor the monetary bump he needed.

I think that ferry dock that collapsed in greenpoint should be an omen for these scoundrels.

Something I haven't heard these yuppies mention is the fact that there's typhus in Newtown Creek's water. They paddle around on a fucking Petri dish and then bring that shit back on land with them. Ladies, if you hear someone brag about kayaking on Newtown Creek, please don't take him home with you. There's more than just VD to be contracted.