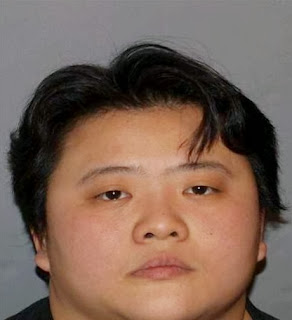 A Queens deacon has been convicted of helping Chinese immigrants seek asylum over bogus religious beliefs by coaching them in how to lie to the feds.

Liying Lin, a 30-year-old deacon at the Full Gospel Global Mission Church in Flushing, was found guilty by a Manhattan federal jury on Tuesday on three of the four counts of immigration-fraud charges she had faced.

The feds say she offered paid lessons on Christianity to immigrants and then coached them on how to falsely seek asylum by claiming they were persecuted by China for their religious beliefs.

She is one of 26 defendants indicted by the feds in 2012 for allegedly participating in separate but overlapping immigration-fraud schemes related to the submission of hundreds of asylum applications containing fabricated claims of persecution. Most of the defendants are law firm staffers, including six Big Apple lawyers and many paralegals.
Posted by Queens Crapper at 12:30 AM

I seriously thought that picture was a man. Anyways I guess knpe we all know what all the Chinese churches in Queens are for!

Perhaps this is how Flushing got to be the way it is today.
Just how long has this crap been going on??? What say you Homeland Security?
Queens. Vibrant. Diverse.

Don't priests where collars? I guess she-he got collared either way. Send them all back to China!

Those Chinese and Korean churches are set up for human trafficking purposes. Come on now, if you look at the stats on religion In China and Korea, 50 percent of people in each country claim time have no religion. For a bunch of people who have half of their population not believing in religion, they sure do set up alot of "churches". Why doesn't the government question these "Asian churches"? The government could make alot of arrrests if they just start to question these businesses and "churches" that these foreigners open. Not to mention, they could do alot of deporting too. But then again the government caterms to illegals and foreigners....so I won't hold my breath.

this person's name is one vowel off from lying,big red flag there.and a minister too,brush up on your commandments "babe".this does explain the overpopulation problem of queens

the dumbasses of homeland security can't stop anything,its why the tsa frisks 90 year olds and has fetuses on their watch lists.its a bloated money hemorraging buraeucracy that must be terminated along with the dea,cia,and the nsa

It seems as though everyone knows that all these Flooshing churches are bullshit and just used for money laundering and sneaking illegals into the country. And they are tax-exempt!!!!!

Makes you wonder just how many pols are paid to look the other way? And the icing on the cake is that they destroy many beautiful, historical old homes in the process.

The gorgeous stone house on north side of Bayside Ave. just east of Parsons is in a state of total disrepair. The once-pristine slate roof is falling apart. And they're parking on the front lawn!!!!! It's an enormous expanse in front of the house been totally ripped up!!!! These people should be arrested for the destruction of this once-beautiful property.

Who do we complain about this to? Peter Kookoo or Stinky Vallone? What a joke! Our politicians suck royally (except for Tony)

Perhaps Paul G. will look into it - hint hint.

Hey, they are merely upholding the 300 year tradition of religious freedom started by John Bowne and the Flushing Remonstrance!

In this day and age, there really is no need for organized religion, it is all bullshit.

What do we all still believe in Santa Claus, the Easter bunny, ghosts, witches, "miracles", the world is flat, the world is 6000 years old, we came from Adam & Eve, science is evil, FOX NEWS is actual news.

It is the 21st Century, not the dark ages.

What does it matter? all those illegal aliens are now called "undocumented immigrants" and are not kicked out of the country. And deBlasio wants to give them ID cards.

Tax exempt And they have people living in the basement or upper floors. Keep looking the other way elected officials and that includes you Stavisky. Shame on you and your cohorts.

All these Korean and Chinese churches and affiliatons with these churches should be evaluated and inspected. There all suspect.

Are Joe Moretti and George The Atheist one and the same?

It seems every group of six asians need their own (tax-free) church building and (tax-free) passenger van.

Another tax shelter...sorry, "church." The Feds should shut all these places down and get them on tax fraud. As for the immigration issue, the Times ran an article on how the chinese fly over, push their babies out in our hospitals, get their babies US citizenship and then fly back home. Neither party seems to care about any of this for different reasons, choosing to ignore the repercussion of unlimited immigration.