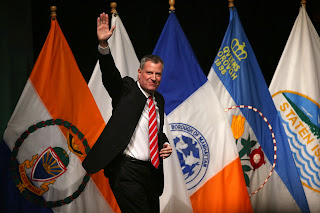 Mayor Bill de Blasio wants to give all New Yorkers access to a universal ID card, regardless of immigration status before the year’s end .

“To all of my fellow New Yorkers who are undocumented, I say: New York City is your home too, and we will not force any of our residents to live their lives in the shadows,” de Blasio said at Monday’s State of the City address.

The mayor first committed to the idea during his campaign to replace Mayor Michael Bloomberg, who despite being a vocal advocate of immigrant communities never fully backed the proposal.

Supporters of the policy argue that a universal ID card benefits not only the residents who previously lacked access to certain services but improves relationships between city agencies and the immigrant community.

Yes, let's bend over backwards to help people who shouldn't be here in the first place.
Posted by Queens Crapper at 12:55 AM

Why stop with DeBlasio, the entire immigrant problem was created by the Democratic machine - since the time of Boss Tweed which is why this is called 'tweeding.'

The roots of the Democratic Party is watered by the sweat of immigrants.

Since NYC votes Democratic all the time there is nothing you can do about this.

DeBlasio, and his policies, are a creature of the NYC voter. Take some responsibility for your actions people!

Anonymous 3....i am proud to say that I didn't vote for distupidoblasio! I actually voted Republican this last election (even though I thought they both sucked!) ....The sheeple have spoken though! Wait until you see even more illegals on the roads with licenses!!

Will the city subsidize me if I take in a few of these illegals to live in my basement? Watch what you say and plan to do Mr Deblasio. Think this through...thoroughly.

In the shadows???!! Is he nuts? This mayor needs to pay a visit to any Home Depot parking lot!
Perhaps he could rent out his Park Slope house to illegals , now that he is living in Gracie Mansion. Hmmmm. A mansion? Talk about a tale of two cities.

Eventually, they'll be given the right to vote in City elections.

Emanuel Celler, a Jewish Politician during the mid 20th century, proposed the Immigration and Naturalization act of 1965 which essentially opened the flood gates for immigration from 3rd world countries and has not changed ever since.

I wonder if they will limit it to one card per person per visit.

Any identity card scheme without the verification of anything on the card is useless.

Any "free" benefits tied to that card will be a huge inducement to fraud.

When its all over, we'll discover that New York City has 25 million people.

HACKS WITH AN AGENDA DO THO...

Benefits and handouts for everyone!!!!

Why not let everyone come here? And let's provide them with jobs that pay cash so they don't have to pay taxes, educate their children for free and give them breakfast & lunch, provide free health care for them, and give them food stamps for life. And also don't forget to let them vote too so we can keep this wonderful welfare cycle going.

Most illegals already have 3 or 4 different IDs. One to use for a job, one for getting food stamps, one for housing. Let's not forget the phony dependents that can be bought at tax time. If the Mayor wants to see that the Middle Class will survive, then he should try to rid the city(and country) of these criminals that suck up our tax dollars and services that they do not pay into. This just brings the Middle Class down into the Servant Class, but I guess that is the big plan. Seems like he is not much different than Bloomberg.

I don't recall him discussing the illegal issue during his campaign. Now that he's in power, watch NYC tilt to the left. All the legal citizens and millionaires will flee the city. Who will pick up the tab for all his illegals? Why can't citizens vote on these issues? No one asked me if illegals should get a free pass.

Working class citizens will subsidize the illegals. Multi-millionaires will live like the ancient Kings of old in their walled communities/armed guard hi-rises. Wortking/middle class will get squeezed to death. See: Brazil, Greece, Argentina...

Welome to the new Detriot.

Since 9/11 I have watch this city wage war on The American middle and working class citizens. This is not about race its about economic status. It looks as if this mayor will deal the final death to a once and great city. Before that does happen, some of my fellow patriots will make one last stand.


HACKS WITH AN AGENDA DO THO...
And what agenda would that be...uphold immigration laws!

They've also been on the E,F J and the A for decades

Blame this on the 76% of registered voters that didn't even show up to vote... Matter of fact blame ALL of BDB's and MMV's actions on those 76%. You empowered him.

One big BOOTDELLO !!
Yep 76% of registered voters didn't vote and now they will get whats coming to them.
Next diBlasio will be giving them DRUNKS drivers licenses, free cars & cellphones and keys to your unused basement.
I'm gonna move to Texas where they dont have democrats !! Queens RIP

Quinn would have been better because she's stupid and wouldn't get anything done. diBlasio is outright dangerous. Much worse then Bloomberg, Boss Tweed and Cuomo#1 combined.
If your white middle class and dont own a house on a land-marked street or gated communiety GTF out of NYC ASAP. Being out numbered by sheep and illegal immigrants You WONT have a 2nd chance. The feral uneducated spawn of all these animals will be coming through your windows for food and money in 15 years like in East LA, Mexico and Central America's overpopulated slums.

Anonymous said... "phony dependents that can be bought at tax time"
Yes unwed mothers sell their tax right off to people who "have' to work on the books. I hear it's a 50% split.

Quinn would have been better because she's stupid and wouldn't get anything done. diBlasio is outright dangerous. Much worse then Bloomberg, Boss Tweed and Cuomo#1 combined.

sounds like you have been to too many meetings of queens civics where the main attendees are easily rattled old ladies that believe pretty much everything someone in authority tell them.

So now they will cut to the front of the line for housing too? What won't we do for our esteemed illegals? Nothing's too good for them!

I didn't vote for de Blasio. I voted all my life but I don't vote anymore. Voting only leads to disappointment.

Good thing we got rid of Bloomey, right?

The Southwest is running out of water, but Obama is helping the situation with his surplus of wetbacks! Carolyn