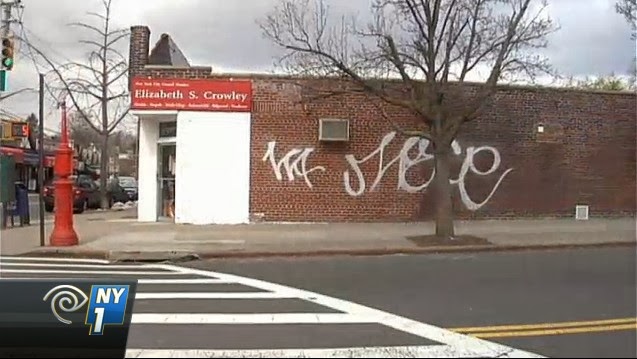 You know your neighborhood has a graffiti problem when even the local councilwoman's office has been hit.

"It doesn't look good for her. You know, its not good for the neighborhood," said one resident.

The wall outside Councilwoman Elizabeth Crowley's office was vandalized about a week and a half ago, but some people who live and work in Middle Village believe it's a sign of the times.

They say they've noticed a lot more graffiti in the neighborhood in recent months and it is not just public or commercial property being vandalized.

"I think it's getting worse. I've been working here for 40 years and I've seen the neighborhood little by little deteriorating," said another resident.

"I think it's terrible," said John Killcommons from Juniper Park Civic Association. "It's a real disgrace for a great neighborhood like this."

Community activists like Killcommons are calling on the city and Councilwoman Crowley to do more to address the issue. Through a statement, Crowley shot back, 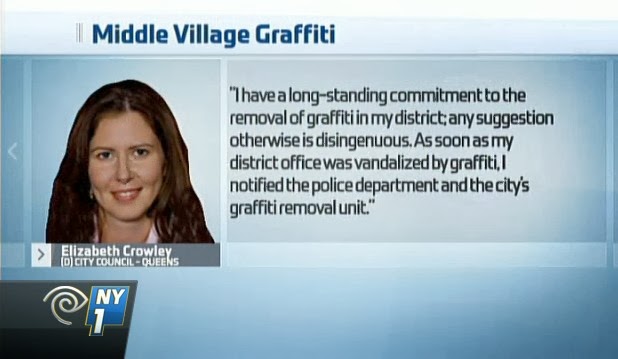 Crowley went on to say that her office is working with a private contractor to remove the graffiti, and come spring when the city's graffiti removal street teams are back on the street she will work with them to ensure that Middle Village is a priority. Some residents will be holding her to that promise because to hear them tell it, the problem is getting out of hand.

I like how she supposedly both notified the city's graffiti removal unit and is also hiring a private contractor. Why? Ten minutes with a borrowed powerwasher should do it. Wanna borrow mine?
Posted by Queens Crapper at 12:01 AM

All neighborhoods in NYC are deteriorating....Thank your local politicians for that! Slowly we have third world trash moving in then you add yuppies on top of that and what do you get? Shit neighborhoods because of the trash the politicians allow into this country.....and they allow these stupid ass yuppies to move in here to sleep 4 people in a one bedroom apartment! Our government allows neighborhoods to go down the toilet! Stop voting for shit politicians and we Wont have these problems!

Please introduce a bill to dramatically increase the fines for graffiti.

A fine of $5,000 for each time a vandal is caught tagging should do it.

so to stop the scourge of graffiti they have to wait for the season to change and warmer weather.

you punks have 3 weeks to tag walls and trains,although I wholly endorse spraying the walls of hack council offices.

You can't use a power washer in sub freezing temperatures In addition, many cleaning solvents don't work in extremely cold weather. . They are waiting for mild air to move in, hopefully in March.....
This is what I was told by NYPD in my neighborhood of Forest Hills, which has a similar problem with graffiti.

The temperatures weren't sub freezing or even close to freezing when her office was tagged. This past Thursday through Monday, the temps were in the 40s and 50s. No excuse for leaving it an eyesore this long.

Someone tagged the walls by the Grand Central Parkway and the LIE overpass Wednesday night. It was 12 degrees overnight!. I don't think it can be cleaned off or painted over when temps are in the teens and twenties. Heck, the forecast shows arctic temps all next week too!!!
I don't expect the walls to be cleaned up anytime soon.
I called it in to 311 .

This issue demonstrates how inept Dizzy Lizzy Crowley really is. Her office staff is also clueless.. Can we finally get rid of this train wreck?

Don't you know that our electeds go into hibernation during the winter?

Liz needs to get with the program: The Museum of the City of New York celebrates graffiti now through August 2014.

She should feel honored that her office has been tagged by an artist.

Are you kidding me, they are DOA.

she has a long standing commitment....to herself!

A sandblaster and walnut shot will take that off without damaging the wall.
The Mexshitz hit a corner house in Ridgewood last week. I helped those people out
It took me longer to set up the compressor & blast bag then to remove the tag (5 minutes).

I agree make fines $5000, 6 month jail or 1000 hours community service cleanup for first offense. (like Sherrif Joe in Arizona)
These suspended $100 fines and slaps on the wrist are bullshit.
In the old days with The Boogieman we would nab taggers (they always ran south) and give them the option of "the baseball bat" or have them paint there own faces, hair and hands. The bastards never came back to our area and automobile vandalism also stopped.
The 104 pct was also useless back then in the 70s everybody called it "the convalescent home"

Wannna get stuff done and clean up shit you have to get off your ass and DO IT YOURSELF!! --Start with the politicians !!

Those are semi porous bricks and mortar
Liz needs to sandblast that wall then hit it with a silicone or oil based sealer **DO NOT USE WATER BASED** so future pant wont stick and come off easy.
It also makes the brick look great.
Everybody with brick should do this and re-hit every spring. I use a a 1.5 gallon $20 bug sprayer.

The problem is you have people who think graffiti is cool. A neighbor told me a graffiti vandal was caught by the police and he was caught for a prior act and he was in his mid 20's. Look at the subway trains with the windows scratched with graffiti. Were the vandals kids or adults? People have to say something but adults don't except complain on these forums. I have no problem watching someone walking their dog and making sure they pick up after their dogs. Public shaming usually suffice but you do have the arrogant jerks that walk away.

While Crowley should take the initiative here and get the graffiti off the building (she is, after all, an elected official), doesn't the owner of the property have the primary responsibility of cleaning graffiti? Does the city own her office building?

The citywide graffiti task force is down to about a dozen cops, they don't just lock up vandals and send themon their way. They go out and document these vandals tags and build felony cases that result in huge fines and some jail time. The mutts know that they are not out there and pct cops are too busy.................wait till it gets warmer......