New York City Councilman David Greenfield is proposing the city clear sidewalks when property owners don’t and then charge them $250 or more.

“Current law does not provide enough motivation for many property owners to do the right thing,” said Greenfield in press release.

He wants to amend existing law and have the city do the work. That, “would actually result in ice-free sidewalks and additional revenue,” said Greenfield.

Greenfield is proposing to use temporary snow laborers to do the work. The city already has a database of such workers to call when needed.

“Existing law doesn’t get to the heart of the problem,” said Greenfield’s communications director, Conor Greene. 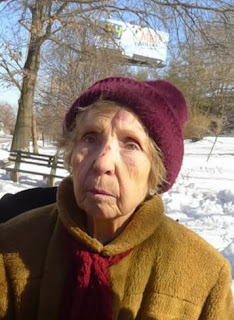 But what about city-owned property?

An elderly woman took a tumble on Monday at the intersection of 74th St. and 57th Ave. in Maspeth, thrown for a loop as she tried to make her way to the supermarket.

She was left bloodied and bruised by the incident, said Robert Holden of the Juniper Park Civic Association.

Sanitation Department spokesman Vito Turso said he wasn’t sure which agency was responsible for the 74th St. sidewalk that claimed the woman on Monday.

“Resources are allocated on a priority basis with tens of thousands of crosswalks and thousands of bus stops and hydrants coming first before little used sidewalks adjoining a highway,” Turso said.

Transportation officials pledged to inspect the location on Tuesday.
Posted by Queens Crapper at 12:13 AM

How idiotic! The city can't even clean it's own properties.
When are the pedestrian crosswalks on Queens Blvd going to be shoveled? And the sidewalks adjacent to city parks???

This is a step in the right direction. It's criminal to have mobility eliminated for so many city residents for months every year because scumbag property owners don't want to be responsible and maintain the ROW for pedestrians. Hopefully Greenfield's bill will put DOT or DSNY in charge of clearing sidewalks along city owned property so that they can be cleared reliably as well.

The existing laws do not work for many quality of life issues, especially in Queens.

But then when you have city properties that are not even maintained properly, then there is a bigger issue that needs to be looked at and that includes garbage issues as well.

This is great idea!!!! SO many jackasses in Flooshing have not bothered to shovel at all this winter!

Even Bell Blvd. was covered in ice in some places last weekend. That would never happen in Manhattan.

I hope the law demands that the entire sidewalk be cleaned - not just a shovel's width path.

Hey crapinski:
I recently had a conversation with a neighbor who works for the city. He told me that if a person has a 'slip and fall' on a city owned property whether it is caused by ice, snow or broken cement the city is not responsible. The party responsible, insurance wise, is the adjacent property closest to the site of the of the accident.

I told him he was mistaken and he swore he was correct.

You know about this stuff, is he right or wrong?

No fines on a private property owner can be imposed unless every square foot of city-owned property is free of ice and snow.


So, business as usual.

Get after the BIDS. Why are they showing films in parks during the summer supported by public money there is nothing for cleaning sidewalks at curbs so shoppers can patronize local stores.

These 3 points will take care of 3/4 of the problem.

BIDs usually get their funding from fees that the businesses pay directly for (which i think the businesses have to vote for to make a BID), not so much from the general tax pool.

Yeah like that's going to work. The city can't even clear sidewalks its responsible for.

I don't understand the opposition from you guys that say no fines until the city clears their walkways first. And why don't you think this targets church sidewalks or corporations? If there are sidewalks, why would they be exempt? With federal property I'll admit collecting fines could prove difficult, but the others? Yes the city should absolutely do a better job, but that they don't know should in no way excuse the negligent behavior of so many property owners.

@anon who thought the city passed liability to nearby property owners, maybe this is where that came from: The city used to be liable for injuries sustained on all sidewalks, including those in front of private property, if they were aware of dangerous conditions. Some lawyers maintained a map of sidewalk conditions, notifying the city of every last crack. Then when someone inevitably fell, they could sue the city for not repairing the dangerous condition by claiming that the crack they notified the city of was the one that caused the injury. Property owners were responsible for maintenance, though the city could fine them if they neglected their responsibility, and I believe the city could make repairs themselves and send them a bill (both of which the city can still do). It was a screwed up system all around. The city's 'fix' was to push liability onto property owners. If the city is the property owner, they are still liable.

This did nothing to improve often dangerous walking conditions throughout the city. But it did stem the tide of lawsuits - easier to notify the city than every single property owner, and easier to get a big payout from the city.

Commentor 13.....I don't believe anything the city "claims". They only do What's convenient to them. If a tree in front of your property Is causing sewer lines to back up and It's affecting your plumbing, the city says they are not responsible for it, but if you want to cut that tree down, then the city tells you that It's their tree and you can not cut it down.....I think the city just does whatever is the most convenient to them.

Check out the sidewalk surrounding ShittyField.

Why aren't the Wilpons forced to maintain the property that they basically stole from NYC?