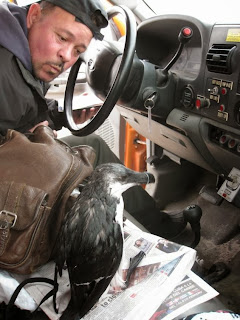 The oil-soaked razorbill that waddled onto the beach in Far Rockaway last month was just the tip of the iceberg.

A January tugboat accident spilled between 6,000 and 8,000 gallons of diesel fuel into the waters, a measure that far exceeds the level of damage first indicated by Department of Environmental Conservation officials.

Meanwhile, as many as 10 birds may have been drenched in oil when the tug Sea Lion took on water, sinking just outside Atlantic Beach.

But wildlife rehabilitators who received several waterfowl covered in muck suggested the number of sickened sea birds could be much higher.

But according to DEC, it's swans that are responsible for the destruction of native wildlife and must be destroyed. Somehow I don't think their alleged crimes compare to all that humans have done to the environment.
Posted by Queens Crapper at 12:19 AM

Well said, Crappy. For those interested, the full text of the proposed mute swan management plan can be found here: http://www.dec.ny.gov/animals/7076.html
Comments can be sent to the DEC address in the link before Feb 21.

I suspect that the the DEC has gotten complaints from wealthy people in Rochester and Eastern Long Island who are tired of getting swan shit on their Prada boat shoes while walking between their veranda and the boathouse.

where do the DEC get their ideas,from Ted Nugent?

one should look no further than Kennedy Airport and that sewage plant on beach channel drive for the reason why the waters by Jamaica Bay and The Rockaways have been an indescribable(dark brown?dark grey?black green?)color.
and of course reckless energy companies that since deepwater horizon feel like any devastation they create will only result in a fine that they can easily afford.

Not having massive mechanical transport vehicles passing through our water ways or beaches spilling oil and other extremely toxic chemicals, why would we do that ?


Bow to the system!