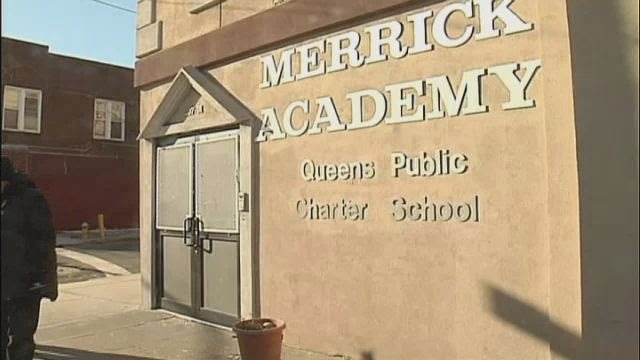 There's something rotten at Merrick Academy Charter School, something besides the raw sewage that leaked into the basement in recent weeks.

The 500-student school was supposed to start 2014 in a new building, a former Catholic School, but that was delayed by several days, leaving parents to scramble for childcare.

Charter school boards are supposed to make all major financial and operational decisions. But several trustees say they never even saw, let alone inspected or voted on, the 10-year multi-million dollar lease.

NY1 obtained a copy of the lease and the only name on it is Gerald Karikari, board chairman at Merrick Academy since 2004. The lease began a full year before the school moved in, meaning for at least 12-months, it was renting two buildings. The lease terms suggest the public charter school is now responsible for major costly repairs to the church-owned building.

These are not the first management issues or allegations of impropriety involving Merrick Academy. Years ago, several founding board members, including state Sen. Malcolm Smith and Rep. Gregory Meeks, resigned amidst reports tying them to another questionable real estate deal involving the school.

At Merrick Academy Charter School much of the public money that's supposed to go towards educating students is actually going towards real estate.

"There's rules that should be followed, that wasn’t followed,” said parent Kenneth Samaroo.

Several members of the school's board of trustees agree, saying their chairman, Gerald Karikari, has been making decisions without consulting the rest of them, like signing a new multi-million dollar lease while the school was still paying rent on its old lease. In January, students moved to the new building and, as we've told you, there've been a lot of issues like no heat and a sewage back-up.

There's also been a lot of costs.

“The totals for construction were about half a million dollars to get everything done. In order to get out of the old site's lease, we had to do a buyout of $462,000. So with all of those figures adding up, including the rent that we paid when no one was in the building, it's roughly around $1.5 million,” said board member Michael Zampella.

And every dollar counts. Merrick gets $7.5 million in taxpayer money each year, the same amount per student as other city schools, but at Merrick much less makes it to the classroom.

Merrick was started by a for-profit company, Victory Education Partners. The state has since outlawed for-profit charter managers, but existing relationships were allowed to continue.

Merrick pays Victory at least $750,000 a year, but the areas where Victory says it helps the school, like staffing, academics and operations, have all been riddled with problems.

While there is no indication that SUNY plans to intervene any time soon, its own evaluators found the school in disarray as far back as 2011, writing, in part, "The absence of an effective leadership structure since February 2010, coupled with the decline in student achievement, reflects a failure of the board."

"As a board, we are responsible to ensure the safety and well-being of the students, and we failed," said Michael Zampella, a member of the school's board.
Posted by Queens Crapper at 12:19 AM

this should stand has an example why charter schools should not get a stinking dirty penny of our taxes.It may be why they are up in arms on one of the two things The Blaz actually makes sense on,.Since they will have to invest their own cash instead of using ours as disposable income for crackpot investments,starbucks coffee and artisan lunches

Seeing malcolm x-senator and Bad Rep Meeks(this guy still hasn't been caught?)names on this is bad enough,what sucks is that the kids are the ones who truly get screwed,since they might have to transfer to public schools making them more overcrowded.

Watch - it will turn out that Gerald Karikari owns the property through some shell corporation.

Education and medical services should never be for-profit - this is what you get - absolute corruption - just like the axis of evil - oil, insurance and pharmaceuticals - they all make obscene profits by screwing the public.

Now we can add charter schools to the list.

Most of the non-profits should be looked at in Queens - many of the people sit on them without the foggiest idea of oversight or understanding of responsibilities.

As a matter of fact, this profile makes them 'perfect' for these groups as they mindlessly rubber stamp everything presented to them.

Pretty much everything in Queens needs looked at, I think one will find major corruption has run wild.

1) Our public schools, highly unionized, were once the envy of the world.
2) Controlling for economic status. English language proficiency at home, and disabilities, they still are.
3) Unions are the first, last, and only bastion that allows teachers to serve kids without fear of political repercussion. Yes, it means that the few headline-grabbing bad teachers take longer to purge. What you don't read about are the legions of great ones who are protected from corrupt government targeting when they become "too expensive" to keep on the payroll.

Where do you think charter funding comes from, anyway? Charity and pocket change?

Read something else besides the NY Post for once and get a clue!

Anonymous Anonymous said..."Read something else besides the NY Post for once and get a clue!"

Very good point ! The sheepel are to busy with TV and sports to see what is really going on.

Anonymous number 5.....The government and union is the only thing that makes the nyc school suck! The other thing that makes it suck is because "I no speak english" is now acceptable in the school systems! These Hispanics can care less about their children's education! They are only here for the welfare handouts! Plus our schools are way overcrowded! Keep it up foreigners and have more kids, your children are coming out dumber than before they went to school!

Anonymous 6 must be a NYC public school teacher to come up with that lame bullshit.

And the private school YOU went to must have gotten a big boost from mommy or daddy to have graduated someone who could craft such a compelling counterargument.

"The government and union is the only thing that makes the nyc school suck!"

:: you think removing govt. and the unions is going to fix the real problems in the rest of your post?

This post is about money disappearing and poor conditions at a public school. Take your petty nonsense out to the schoolyard, please.

If the only bad actor here is Karikari, then why doesn't the board just fire him?

Real education choice will happen when pupils and parents have vouchers.

This entanglement of government and charters schools leads to corruption here in New York and elsewhere.