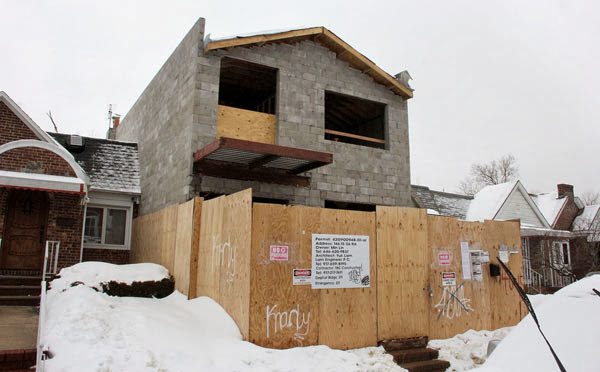 Flushing neighbors are fuming over a large house they say dwarfs the small homes around it and completely changes the character of their block.

The two-story house, which has been under construction since the fall at 146-15 56th Road, will replace a one-story dwelling that was built in 1935 in a row of townhouses.

“It has destroyed the neighborhood,” said Jose Fernandes, who has lived next door to the site of the new house for more than 22 years. “If they got permits to do that, what stops others?”

A number of community leaders and civic organizations have joined the residents to speak out against the building, which they say is one example of a wider problem that affects the whole borough.

“It’s getting more and more egregious,” Don Capalbi, president of the Queensboro Hill civic Association, told Community Board 7 at a February meeting. “If it’s not addressed now with the new City Council and new mayor, it won’t happen in the next 10 years.”

After the frustrated neighbors contacted him, Capalbi alerted CB 7, which forwarded the complaints to the city Department of Buildings. The agency said the development was completely legal and there was nothing it could do to prevent it from being built.

The new house’s owner, Min Lin, who bought the property in August, said her home’s construction has followed all city rules and zoning laws.

Councilman Peter Koo’s (D-Flushing) office will be bringing the issue to the Department of City Planning in the hope of getting a rezoning approved.

“I will not stand idly by while the character of our neighborhood is threatened by out-of-scale development,” Koo said. “I will be meeting with the Department of City Planning soon to discuss this issue and to explore all possible options, including rezoning, to prevent instances like this from becoming unsightly patterns in our community.”

I think the horse has already left the barn, Pete.
Posted by Queens Crapper at 12:47 AM

Those people are shitting all over our borough and country. They do as they please and no one has the balls to say the truth and put a stop to this
Hijacking of America!!!!!!

The current zoning will not stop this kind of extension. However, if the next door neighbors are not happy about the extension, they can sue the developer for extending the party walls without the permission of the adjacent building owners which share the party walls.

Someone at DOB and the Community Board obviously took bribes on this one!

Up the block there are row houses with two story monstrosities just like that. They stick out like sore thumbs and cheapen the neighborhood.

For some weird reason these row houses have out sized zoning (I think R4).

The Chinese that have flooded Queensboro Hill the last 10 -15 years couldn't care less what the buildings look like or the character of the neighborhood -- they just want to be able to stuff all their relatives in one house and convert it to multiple dwellings.

Peter Koo is useless. He was a pro-development Republican prior to his switch to the Dems and his stripes have not changed. There aren't enough White or Latino residents left in the area for him to feel compelled to do anything. The Asians all want to be able to build.

Queensboro Hill is a gross shanty town now. It is too far gone.

bloomblight will not be stopped.

and the Blaz does not have a hangup about this,bigger and denser.

That looks really bad.
The line of sight for all the other homes next to it is ruined for ever.

Please look at Google Street view for a good look and see what a beautiful block was just destroyed by the insensible Min Lin !
The city should order it to be torn down.

And this is why Caucasians do not want Asian neighbors.

They have no respect for American culture or values, no sense of beauty or harmony - it's all "I have money, fuck you! I will cut down your trees, tear down your houses, and destroy your neighborhood!"

Why not just wait till all the damage is done before doing anything, because that is how it seems Queens is handling this bullshit.

When Queens had a chance to stop this nonsense the leaders choose to do nothing. Now the majority of destruction has already been done and NOW you want to do something. Makes no fucking sense to me.

It's all about pandering and being "sensitive" to these careless immigrants . It took almost a century to build that neighborhood, and only a few years to destroy it thanks to our feeble politicians who just want money and votes!!
Why isn't there a mass protest in front of this property?

Is there an engineer out there who can tell us whether those walls conform to the Building Code?

Also, aren't windows mandatory in specific rooms? ...(though I suppose it may be a two-room dwelling)

I would take it even further this is white people do no want to have any low-class third world immigrants (Pakistan, Middle Eastern, Mexican, etc) and low class black ghetto people as well and let's add poor white trailer trash too.

Can't we have just a couple of states for all those low-class people. Then they can do whatever they hell they want and stay away from the rest of quality people.

After 42 years as a Queens resident, I have succumbed to the realization it is time to flee. My heart doesn't want to, but sense of neighborhood is gone, and there is no longer any room for a tax paying civil servant in this new world. Just waiting for retirement so I can move somewhere in this country that doesn't bleed out the ones that actually play by the rules.

I grew up in Queensboro Hill (near the intersection of Kissena and Booth) and when I take a Google Earth virtual tour I see many new construction Fedders Specials replacing the beautiful old single family homes/row homes of my youth. Just poke around near St. Anne's Church - horrible. Beautiful old Tudors replaced with third world crap.

These Asians do this shit all over the place! And I get called a racist because I don't want Asian neighbors! I'm not racist toward them....I don't care....the only thing I do care about is the way they destroyed the neighborhood over the last few years and try to take credit for making district 26 schools the best when in fact district 26 schools have always Been good because we never had so much overcrowding in the schools. I'm just waiting for these schools to fail due to more overcrowding....these Asians don't seem to care about the amount of stress they are putting on this city by building these so called 2 family houses and putting 4 families in them! They dont care about the way they upkeep the neighborhood, they just want to live the way they Did back in their third world country (which they claim isnt third world). The government is to blame for not stopping the visas.... they just keep handing out visas like It's nothing.... we are seeing the forces of nonstop visas in NYC right before our eyes, but nothing is being done about it.....soon all of NYC will be Asians or Hispanics.... no white people, no black people... no middle class...just trash

Wait long enough and some of those old houses will be the strange-looking ones on the block.

This is an economic and cultural tide that cannot be resisted.

At least when Bedford Falls was transformed into Pottersville, it resembled an American city.

Queens is being transformed into a multi-cultural blend of the slums of Shanghai, Mumbai, and Mexico City. The mere enforcement of zoning is helping but its not a solution.

Peter Koo-koo has been sitting on his hands for years while neighborhood "character" all around his district was being destroyed by over development.

And that glorious nest of cuckoos at CB7 have been doing the same but with their thumbs deeply up their asses!

And those twin hemmoroids, Chuck Apelian and Gene Kelty, just sit around watch the show.

As long as this is not in their precious back yards.
Let it be.

As far as Queensboro Hill, it's become little Taipei!

Come to Elmhurst and you will see the same thing as to what is happening in Queensboro Hill. These Asian builders have destroyed what was once a beautiful neighborhood with ugly brick boxes that have no architectual value whatsoever. The politicians only care about that green bottom line and are useless when it comes to stopping the overbuilding that is occurring all over Queens.

Last year there was a movie scene shot on this particular block. It resembled the move plot form 1950s with single family houses and beautiful front lawns. The damage is done. I blame the NYC Department of Planning and DOB. There is no plan. How they can build something like this legally???
Nobody in their right mind would give permission for something like this. The building should be demolished and the architect who designed it should be stripped from his license.
This is sad.
https://www.google.com/maps/@40.745651,-73.820392,3a,75y,25.5h,90t/data=!3m4!1e1!3m2!1sB_T-mkGocWq_kJFstLAcWg!2e0

So out of context renovations and buildings are only okay if White people do them? Go to Howard Beach, Bayside or tons of neighborhoods in Long Island and you'll see awful new construction and ugly renovations in white neighborhoods. I get you guys like to hate/blame non-whites, but the truth is if you look at any race/group/ethnic group you will find people with good taste, tacky people and people who don't give a sh!+. Go to places like St. Albans and middle class blacks don't want ghetto people in the neighborhood, in Bay Ridge a lot of people don't want the jerk guido types in their neighborhood. Have any of you seen what the russians (Whites) did to Sheapshead Bay??

Who said anything about white people's crap being ok? Do you read this blog regularly? Did you see the Frank Lloyd Crap special that was profiled today? White guy did that.